To all readers: best wishes for a healthy and enthralling 2020!

Have some fun with this small game, created from an Adobe Stock image, using Illustrator (for assets) and Captivate 11.5. Again SVGs are used extensively. You can play the embedded game (fixed resolution) but I recommend to play it from this link which is a rescalable version. It may be easier to find the differences, especially if you are using a big screen.

Lot of SVGs, some multistate objects, one shared action, two small advanced actions + two variables. If you follow me since a while you know that I had lot of fun with all my favourite Captivate tools.  I didn't use any Javascript directly (actions are converted to JS on runtime) but I’m sure this can be done with JS as well.

The usual white screen with grey arrow is replaced by a poster image. After the mysterious title slide game, game and end image are all on the second slide.

SVGs reign as you can see in the screenshot of the Timeline panel of the game slide: 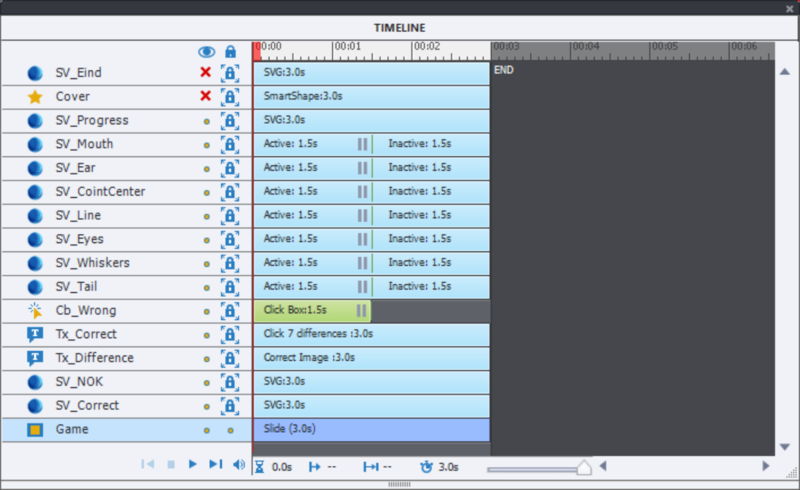 The stacking (z-order) of the objects is important. From bottom to top you see:

EnterGame triggered by the On Enter event of the Game slide

As usual this standard action will prepare the correct situation for the slide:

WrongAct triggered by the Success event of the Click box CB_Wrong

Another rather simple standard action, to let some audio play and have effects with the cover:

The most important script for this game. Several actions happen when a correct hotspot is clicked:

This is a Preview of a filled in action, where the 5 necessary parameters are marked in a color rectangle: 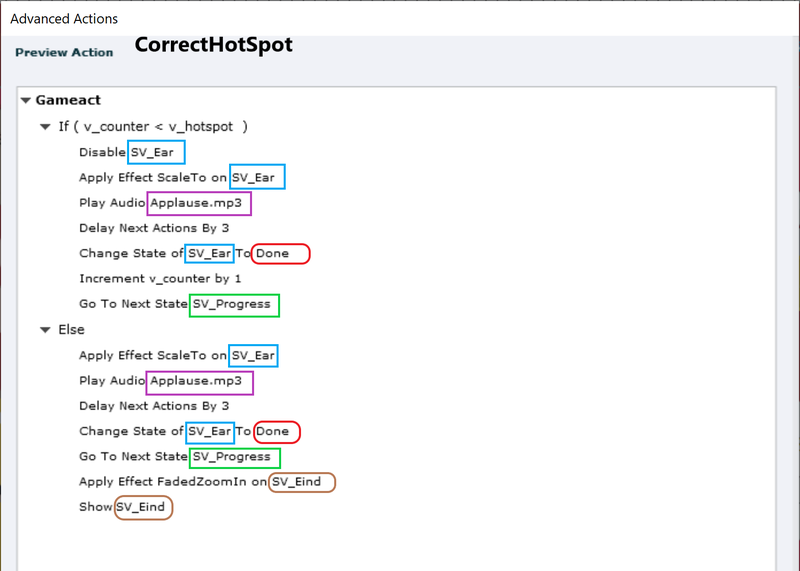 None of the candidate parameters need to be a parameter: the two variables (v_counter and v_hotspot) nor the literals. As I have emphasized many times, it can be tricky to define a literal as parameter. In this particular case it could have been possible to indicate the Delay time needed to listen to the audio clip being defined as parameter. That would be necessary if you want to use audio clips with very different lengths for the the individual hotspots. The parameters are visible in this screenshot:

Why shared action instead of duplicate advanced actions?

You can use exactly the same shared action if you have a different number of hotspots (differences). Just edit the action ﻿EnterGame﻿ to replace the value to be assigned to the variable v_hotspot. It is the reason I replaced the literal '6' by a variable v_hotspot. Several parameters are used multiple times in the shared action: the name of the progress bar, the hotspot, the audio clip. When using duplicate advanced actions you would have to edit quite a lot.

One of the disadvantages is the fixed status of the applied Effects. If you want another effect, use the shared action as template for an advanced action, replace the effects and save it as a new Shared action. If you are new to shared actions: contrary to advanced actions it is perfectly possible to save a new action with the same name, provided the older one is no longer used.