Allen Partridge in a comment on a post suggested that I should blog about the work flow, the logic when setting up advanced actions. I find this a very difficult subject for a blog post, much easier when teaching face to face or online teaching. But this new question on the forum, that I tried to work out is a fine example to give you some tips, about shortening developing time by sitting down a while to reflect about the situations you want to create. And you'll not believe it but I do sit down, take a pencil and paper at that moment, or start to scribble in Evernote if I can't find those venerable tools immediately.
I will not explain the advanced actions in detail (some screenshots in the Gallery), but focus on the work flow and offer some timesaver tips.

"Is  there anyway of taking a  series of variable controlled numbers say 0-9  that have been punched into a keypad, and formatting them so that the  ones that are clicked on the keypad are displayed in sequence. E.g.  if you click 1,5,8 and 9 on the keypad, then in the next slide I want  1,5,8 and 9 to be displayed as the keypad code so to speak." The complete thread can be found here: Push button lock theory
Those of you who visit the Captivate user forums frequently, will not be astonished that I asked more questions to have a clear idea about the goal. And the user kindly provided me with the image of that push lock. So I got these details:

Have a look at this movie to understand better what I tried to achieve. It has only 3 slides: Intro, EnterCode and ShowCode.
Download PushLock.swf


For this particular (simple) use case, what did I write down? And you'll see that I mostly define labels for everything as well.

Which situations will be possible and will I solve this in one slide or in multiple slides?
In this case I decided to have only one slide EnterCode with all the events/actions and a second slide ShowCode to navigate to with the Next button (situation 4).
There are 15 events to trigger actions by interactive objects:
If I want to make it possible to restart the process of entering the code on the slide EnterCode it is a good idea to use the event 'On Enter' for this slide to re-initialise everything.

Mostly I make a list of the variables I will need and create them separately from the advanced actions. This is only a personal preference, I do see a lot of tutorials where the possibility to open the Variables dialog box from the Advanced Actions box is used to create variables on the fly.

On the slide EnterCode, with the image of the push lock, I'll need (see Timeline in Gallery):
On the slide ShowCode there is only a text caption to show the code. Beware: when embedding the user variables v_one....v_five be sure to set the length of each variable to 1 and no spaces between the variables in order to show the code as a sequence.
$$v_one$$$$v_two$$$$v_three$$$$v_four$$$$v_five$$

My work flow (had 2 slides with background and image on first slide), sequential:
The following steps are the tedious, annoying ones because all the creative work is done. That is why often bugs will enter in this process, perhaps my tips will help to avoid some:

This is the first time I tried to explain the way my 'advanced actions' brain is tackling the process, and I do not have any idea if this could help. That is why I really would appreciate if you take a minute to post your comment and suggestions. What do you think about a YouTube video to show how the extra user variable v_current did save me a lot of time while editing the similar duplicate actions for the 13 buttons. 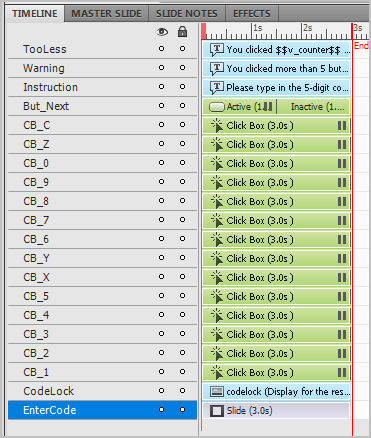