Adobe just released an update to Captivate 7. There will be a lot of talk by the Mac-users because it will now again be functional on their updated 'Maverick' system. But there is a lot more added in this update. I was agreeably surprised to see some of my requested variables, commands and advanced action features added, and some lack of congruence in interactions solved as well. Sure, lot of other Captivate users will blog about their favorites, but what did you expect from me? Variables and Advanced Actions features of course :)

In Captivate 7 we got 3 new system variables:

In Captivate 7.01 4 new system variables are added, all in the Quizzing category:

Long awaited: we finally have a Usage button in the Variables dialog box. It was added to the Advanced Actions a while ago as well. This makes it much easier to clean up unused variables. But there are still some limitations. If you select a variable and click on the Usage button, these situations can occur:

Have a close look at the third image in the Gallery and you'll see that there are three new buttons under the Decisions labels, to the right of the already existing + and - buttons that allow to add/delete decisions:


Even more news: there is also a new black left arrow as first button in the top row with buttons in the Advanced Actions panel: tooltip reads 'Preview'. It will open a separate window that shows you all decisions (ELSE included) of your conditional action. That Preview button is not available for Standard actions, will be dimmed.

A Preview example is visible as fourth image in the Gallery. The window size cannot be customized, will cover up the Advanced Actions window and has same size. When necessary a scroll bar appears and you are also able to collapse all or some parts of the action. Don't look for a Print button, not there.

When publishing a table with statements (commands in simple actions) available in Captivate 6 I pointed out some discrepancy between the commands available in the dropdown lists for simple actions and the ones in the advanced actions dialog box.  Someone listened to me, and this has been repaired:

Moreover when you copy a slide, or an interactive object that has an advanced action attached, to another project... you'll not lose the action anymore. What do you think about that?

You have to explore the new Swatches panel, allows you to create a custom palette or import an existing palette like the ones you can create with Kuler. There are lot of other enhancements, bug fixes but with this post I wanted to focus on those related with shared/advanced actions and variables. You can have a look at http://helpx.adobe.com/captivate/kb/captivate-7-patch.html for the complete list. 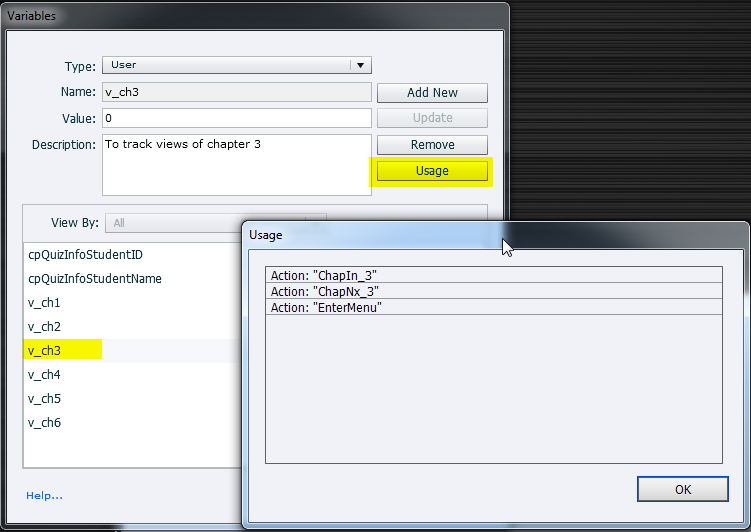