New version, taking advantage of features in more recent Captivate releases, has been published under:
Using cpQuizInfoAnswerChoice for Survey

This blog post is again inspired by a user question, this time in the Linkedin Adobe Captivate discussion group.  Here is the question:
"I have 4 simple survey questions in my CP file (5.5). How can I capture the yes/no answers and on another slide lead them down a specific path based on their answers? "
In the past I already answered several questions on forums about storing the user answers in variables so that one is able to create decisions based on those answers, or to show those answers later on. Both goals can be achieved using one Quizzing System variable: cpQuizInfoAnswerChoice.

Play this movie and answer 4 survey questions. Contrary to normal questions, there are not 2 steps, Submit will guide you immediately to the next slide. Based on your answers there is a branching to a Beginner, Intermediate or Expert slide (you'll discover my new garden immigrant on those slides as well). For a first view, I do recommend to show the variables, it is much easier to see what is happening. That is the perfect way to track and debug advanced actions. Have fun.
Download LastAnswerChoice.swf

The system variable is repopulated after each question. To save the answers, it is necessary to use as many user variables as you have answers to store. Since I have 4 survey questions, I created 4 user variables, labeled v_account (first question), v_hashtag, v_chat, v_devices. Because of the choice to show a text caption with the values of the variables, I created another user variable v_view  that is set to 1 if the user clicks on the button View variables.

The example has ten slides:

This conditional action will branch either to slides Starter, Intermediate or Expert, based on these possibilities for the collected user answers:

It is also possible to store the user answers in the same way as described, and show those answers in a text caption on a summary slide, or use the answers in a feedback or review caption
. 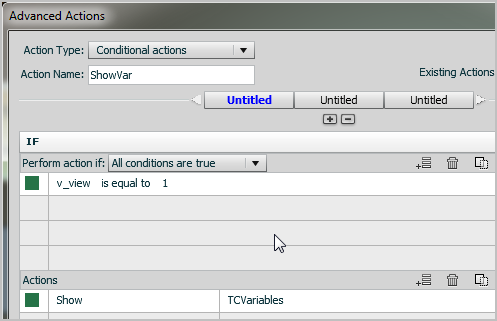