New version of this workflow, with example output to HTML5 and using new features can be found in this post:

Another challenge on the user forum, http://forums.adobe.com/message/4387510#4387510:  "wonder if it is possible to have 5 click boxes on a slide that must be clicked in a specific order before the slide will advance?" Had to ask for some more details. There are no extra (wrong) click boxes on the slide, the check for a correct sequence could be done by using a Check button, and the Next button should appear on the slide only when the sequence of clicks is correct. The user wanted to have the possibility to check after 5 clicks or to have an 'intermediate' check after each click. I thought it also to be a good practice to disable a click box immediately after it has been clicked, since a double click on the same click box was not wanted.

Because variables have to be reset, the On Enter event of this slide is used to trigger the Advanced action Enter2.
Almost identical to the first slide. Because the click boxes do get another ID, but trigger the same advanced actions CB1... for once I didn't even label them :-). The Text Caption TCNumber is still visible on this slide, because it was timed for rest of project. Other objects are:

Only two user variables were created to be used for checking the sequence:
The first variable will be used twice in my logic:

Those are  triggered by the click boxes with the same name on first slide, and also on second slide; similar conditional actions with 3 decisions:

is  triggered by the button BtCheck1 is a conditional action with 1 decision Sequence
It checks if the variables v_counter and v_correct have the same value, which means that the sequence was totally correct. In that case the correct feedback caption TC_OK1 is made visible and the Next button. 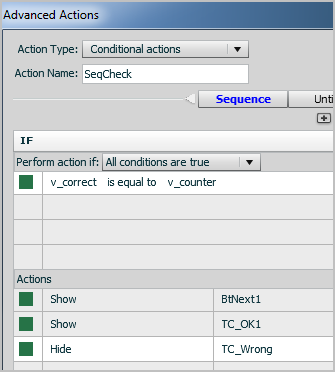 If the condition is not fulfilled the other feedback caption TC_Wrong gets visible and everything is reset so that the user can try again: 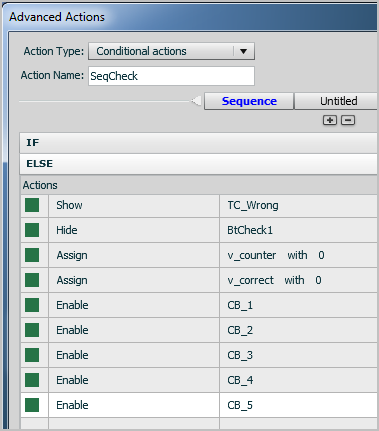 is triggered on entering slide Second
This is a simple standard action, resetting the variables by assigning the value 0 to them.

is triggered by the button BtCheck2 is a conditional action with 2 decisions:
CheckUntil valid for intermediary checks, before all click boxes are clicked, will show the correct feedback caption (TC_Some, TC_OKUntil) and show the Reset button if the sequence is incorrect so far; this is a decision with an THEN/ELSE branching 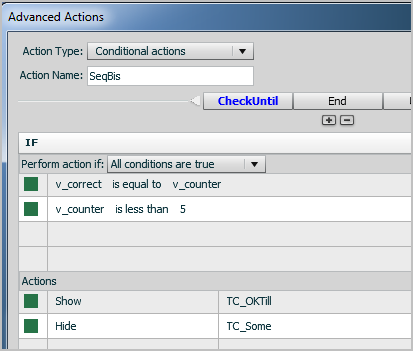 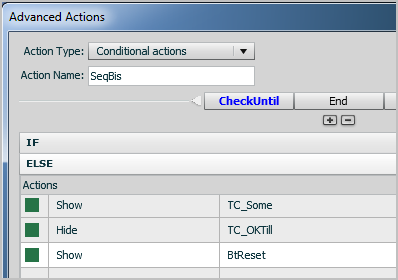 End only will show the BtNext2 when all click boxes have been clicked and the sequence was correct. 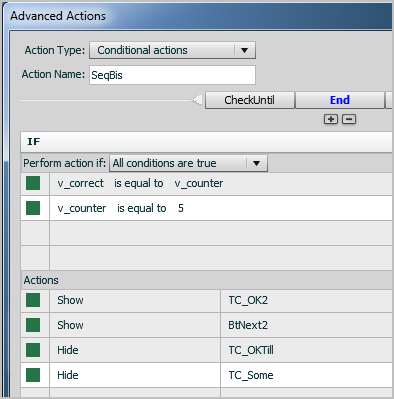 is triggered by the button with the same name on slide Second is a standard action that: 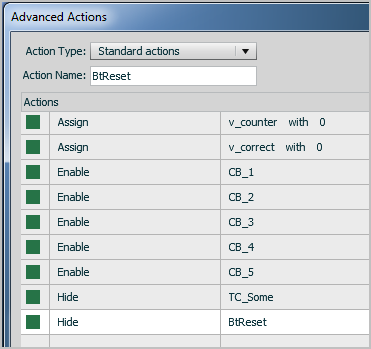 In this example I really appreciated the duplicate and copy/paste functionalities of Captivate:
BTW: I always use the scratch area to keep some information about variables, events, objects, actions in the CP-file