When preparing the usecase for a previous blog post about creating cleaner Captivate-files (Playing Hide-and-Seek with Captivate objects), by using the possibility to show non-interactive objects for the rest of the project, and hiding them with advanced actions, I bumped into an issue that puzzled me. So I turned to the proper place, the Captivate user forum and opened a thread. I did not have to wait long, Ashwin Bharghav (from Adobe) answered and offered a workaround.  And I want to explain the issue and its solution.


For the pretest, one of the usecases in this previous posting I wanted to streamline the workflow in a template because its re-usability.  It meant not having to recreate the advanced actions all the time. To make the template as versatile as possible I decided:

In this usecase, a lot of non-interactive objects were timed to 'Display for the rest of the Project': the images of the buttons (both shapes and Text) and the questions. And when previewing or after publishing I did see this phenomenon: on slides where the objects were not really inserted but showed up because of their timing, they took over the alpha of the Image on the master slide. Have a look at the first picture included: watch the questions and buttons;  the last question and buttons are on the slide itself, the previous ones are on previous slide but display on this slide, and they are partially transparent!

I quote the answer of Ashwin

This explained the phenomenon: the objects took over the transparency of the image on the master slide. But it was not what I expected from a master slide :(

Proposition of Ashwin: when setting the timing to Display for rest of project, there is an extra option: "Place object on top" (see second image). This will put the object always on top of the stacking order on slides where the object is no really inserted but displayed because of this timing. This may not be really what you want, because the object will also stay on top of the real objects on that slide. In this usecase I could live with that solution, but will not always be happy with it.

Another workaround is merging the image in the background of the master slide, that was my approach when publishing the pretest on the blog.

Article with details about 'Hide-and-Seek'

If you are curious about the advanced actions I have been using in this pretest-project and in the keypad-simulation to realize the Show/Hide objects, I have published a detailed explanation of the workflow in this article: Using Display for Rest of Project to create a cleaner Captivate file 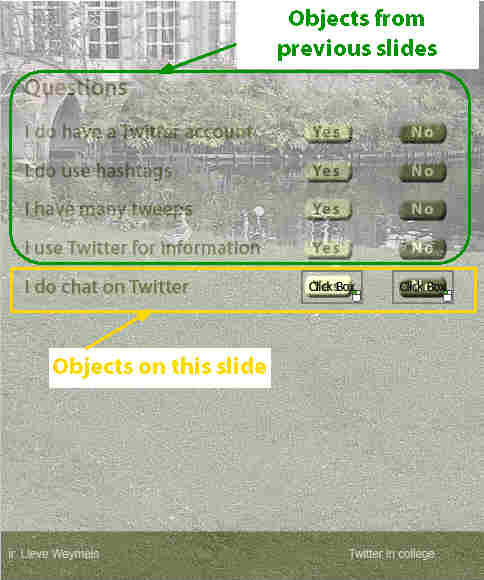