Captivate comes with several widgets that you can use freely. Some of those widgets are really easy to use and to configure, but I have to confess that sometimes I had to curse quite a while before discovering some functionalities of the Widget Properties dialog box. Because there is no explanation available at all. This small article is meant to offer you some tips and warnings. Some of those tips have already appeared in other postings, where I used widgets.

Some widgets do need a lot of editing (formatting), but if the widget has an associated variable do not copy it to save time, because the copies mostly will cause issues.

Multiple widgets on one slide

You can use multiple widgets on one slide, but be careful when stacking interactive widgets that are in the same location on the slide! This can lead to unpredictable results, same as with interactive objects on the same place.

Those widgets can have a score (eventually to be reported to a LMS) and perform actions on Success and on Failure like other interactive objects (button, TEB, Click box).  They will appear in the Advanced Interaction view (F9). Of course that is also the case for the Question widgets (only one available in the Captivate box).

You can only add static widgets to master slides, no interactive nor question widgets. The static button widget can be very useful on master slides until it will be possible to add regular buttons.

Several widgets have associated user variables, which can be used later on to display in Text Captions, or in advanced actions. Examples are CheckBoxes, DropDown, RadioButtons, TextArea, Timer...

To me this is a misleading name because I expect such an area to be read-only which is not the case: for some widgets you have to edit in this preview area! Some examples, just to push you at exploring that Preview area in case you want to change something that is not available elsewhere in the Properties Dialog box: 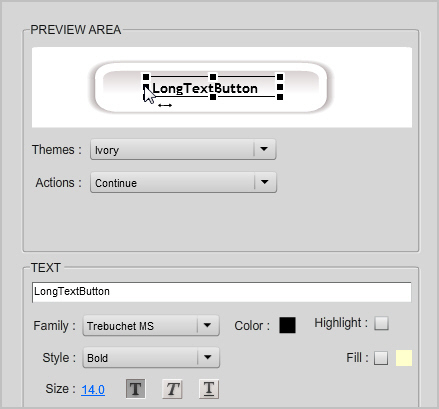 If you want to use a customized image, it will by default be placed to the right side of the button. 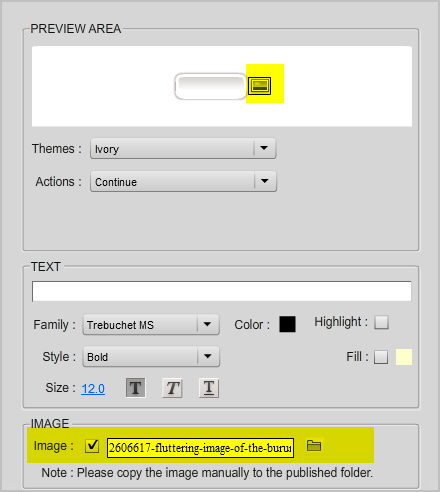 You have to cover up the button with that image if you only want the image to be visible. Do not use transparency in the image and be sure to copy it to the folder where you will put the published file. Moreover this image will be not visible when previewing, only after publishing!

I expected a similar behavior for the InteractiveButton widget as for the StaticButton. I do not remember ever using this button and checked it out. It seems to be buggy, the caption doesn't appear in the Properties dialog box, which makes it very difficult to adapt the size of the text. I'm not sure if this is also the case for other users, didn't read any question about this widget on the forums so far.