Since the release of 11.5 I have written a blog post about Theme enhancements , another one with Tips for the Assets panel, and one for the use of QSP projects.  About the Copy/Paste Appearance I have warned that this can be a great feature in some situations (states, temporary testing, use for text styles) but should never replace Object Styles if you are or professional eLearning developer. Why do I mention this post? You’ll find a similar warning in this blog about using the  switch to destination theme, when inserting (QSP) slides from a project whiif that new slide is inserted after a slide with another theme: 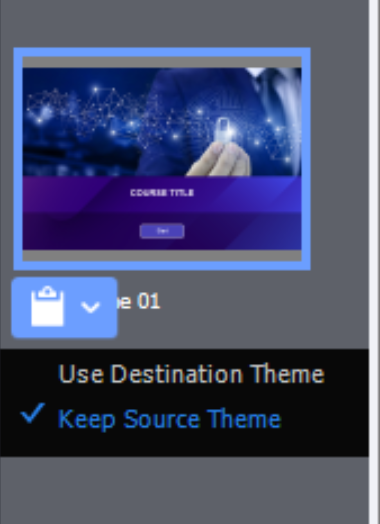 In the screepnshot you’ll see the button which appears in the Timeline under the inserted slide. Default setting is to keep the Source Theme which is the theme used in the project from which you inserted the slide (in this case from the QSP ‘Wired’, non-responsive). For consistent projectt design, it is tempting to switch immediately to the Destination theme which is the main theme of your project (provided you had a one-theme project before inserting the slide).  Believe me: do NOT switch without preparation because the result can be disastrous. I have seen this happening with trainees, and in a webinar presented by Adobe.

This post is meant to give you some insight in the reasons for my warning. I may refer to older posts about themes, which is a topic that is not popular probably because the Theme impact on courses is largely underrated. Too often, when asking on social media about the used theme, I get the answer 'I do not use a theme', something which is impossible!

Let us start with a summary of what happens when you click the option ‘Use Destination Theme’.

Result of switching to Destination theme

All components of a theme can be switched without any warning. Here is an overview:

Each theme has its theme colors palette. Recently I wrote about using Adobe Capture or Adobe Color to start such a palette, which will mostly be based on the stylesheet of the company. In a well-designed project only colors from that palette are used: 10 main colors + 50 tints. When switching a palette, you have no control over the mapping of the colors. For the present situation this means that  color 1 of the source palette will be replaced by color 1 of the destination palette, etc. That can already lead to strange results, because not every palette keeps dark and light colors in specific locations.  Here is an illustration of two totally different palettes. The first is in my test the destination palette, second the source palette of a QSP theme: can you guess  what happens when the colors are switched?

No Usage button is available for colors - too bad.  After the theme switch you’ll have to manually edit if the colors are not appropriate. If it was possible to map colors between the palettes this would be easier: I could tell that the first color of the source theme had to be replaced by the third color of the destination theme, that color 4 was OK to be replaced by color 4 etc. One of my feature requests.

Situations is similar.. In most cases you will see three fonts in the Theme Properties. Some QSP’s use the same font for all text whatever the style. If your destination theme uses 3 fonts and the inserted QSP slide uses ony one font, all the text styles after switching to destination theme will be replaced by the first font in your original project theme. This image explains what I mean: the source theme in Wired has only Arial as font. When I insert it in my demo theme, which uses three fonts (Trebuchet is the least  used but for some reason appears as font 1), there is no way for Captivate to know to which styles font 2 and 3 need to be applied. Result: all fonts will be Trebuchet. In this case that font was only used in feedback messages, Filson Pro was the main font for all text, Termina for Titles. There is – same as for colors – no way to change the sequence of the fonts. Mapping wouldn’t help here, a Usage button however would be welcome. My demo theme is fully documented, which is not the case for the QSP projects.

Now it is getting tough, because each of the QSP’s has its way of defining styles. Some use default object styles, others don’t use them (do not understand the reason).  Fonts and colors will be replaced as I explained above. But the remaining components of the object styles will only be replaced by the style of the destination theme if  they use the same style name. For the QSP’s that is rarely the case. Typical example is the [Default Title Smartshape Style]. It exists in my test demo theme, it exists in each of the QSP’s but is never used. Result: the existing object styles in the QSP will be added to the styles in the destination theme. If you use a lot of inserted slides, you’ll end up with a very long list of object styles added to the existing styles in the original project theme. Very hard to manage those styles!

Similar to the object styles, if a master slide exists with the same name in the destination theme, that master slide will be applied (have seen this happening several times). That can be really catastrophic, especially for responsive projects because the fluid boxes structure of the destination theme will probably be totally different. It is less dramatic for non-responsive projects but could be frustrating as well.

Setup of the skin is not affected by destination or source theme. It will be one skin for the project, based on the original theme which you used to start the project. Only theme component you don't have to worry about!

Hope you understand now why I did introduce this post as a warning post.  In most cases I would recommend never to use the opportunity to switch to the destination theme when inserting a slide, unless you know the themes of the source and destination theme in-depth. That is not easy for QSP-slides. I may post more recommendations for a workflow that can avoid most of the problems when trying to embed those slides with respect of your custom styling.