Last year I published Playtime with Audio ... where I introduced the term 'Audio objects'. This is audio attached to an object that is invisible to the user, has no other functionality than offering the possibility to control the audio by hiding or showing the 'invisible' object using (advanced) actions. Since that blog post I got several questions about controlling the audio objects. In the example you will view here, I focus on audio objects for question slides. And some other tweaking occurred as well, that I will perhaps explain in a later post. Here we go

View this movie and watch/listen carefully. You'll see two question slides, both Multiple Choice Questions. The first, with radio buttons, has only one correct answer and I used the Advanced Answer options to give feedback and to branch to more information about the answers. The second question has multiple correct answers, so Advanced Answer options are not possible there. Both question slides have an audio object (same for both to keep filesize restricted), that will play only on first visit of the slide. From the first question slide you will be navigated to another slide and then returned to the second question slide. The second question slide has the same audio object, but when submitting an answer, you'll get audio feedback and the audio on entering is stopped even if it is not yet finished playing.
Download AudioObjects.swf

For the invisible object to which the audio is attached I will mostly use a Highlight box with a dedicated style 'AudioObject', that I cloned from the original Highlight style. Because I created that style before opening any project, it is available in all my projects. When planning to use a lot of audio objects I will even set it as the default Highlight style. Why do I choose for Highlight box? First of all, because it has a style, which is not the case for any drawing object (which otherwise would be my choice). Secondly to make it invisible just set the Alpha for the Fill to 0 and the Stroke Width to 0 as well.

On entering the question slides, I trigger a conditional advanced action EnterOne/EnterTwo that uses a created user variable, one for each question slide: v_one, v_two.
This variable will be incremented and then checked. The first time the user enters the slide, it will be 1 and the audio object will play because it is set to visible. All subsequent entries will result in a value greater than 1 and the conditional action will hide the audio object, which means that it will not play. Here is the description of the conditional action: 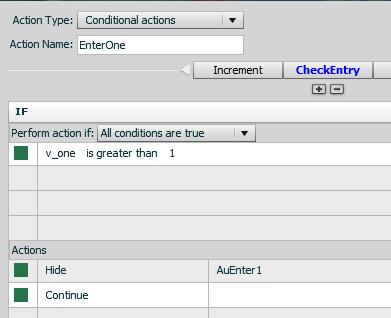 The action EnterTwo is similar to EnterOne, you only have to switch the variable from v_one to v_two and the audio object from AuEnter1 to AuEnter2 (because I labeled those objects that way).
The advantage of having all actions executed on entering this question slide is that it doesn't matter from where the user is navigated to this slide. In this use case it is important, because the first question slide can navigate to five possible slides. If you added the condition to an interactive object on those slide, you'd need to have 5 different actions, and another one for the Retake/Review navigation from the score slide.

Stop audio when other audio starts

If you listened carefully to the movie and quickly entered an answer on the second question slide (about eLearning Suite), you will have noticed that the audio object that was played on entering the slide (if first time) is cut to be able to listen to the feedback audio. This is bit more complicated, because I had to tweak the functionalities of the question slide. This was my work flow:
Here is a screenshot of the Properties panel of that Question slide: 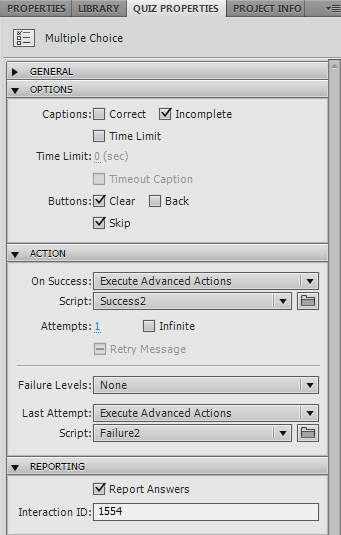 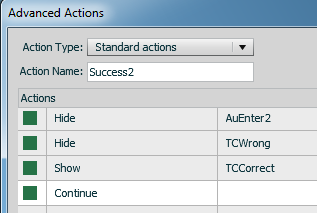 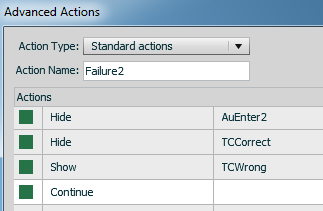 Be careful: the playhead on this question slide will stop at the pausing point of the question slide. In this screenshot of the Timeline this is at 1.5 seconds. In order to 'hear' the audio attached to the Captions TCCorrect/TCWrong you have to move the start of their timeline close to that pausing point. I do not pause the slide, the playhead once released by the Submit button will get on and on reaching the end of the slide continue to the next slide (Score). So I had to extend the duration of the Caption timelines to be as long as the longest audioclip attached to them.

As told in the Intro, I will not explain the other tweaks that I have mostly treated in other blog posts like Question Question Slides. Here is a short list:
If you have more questions about those tweaks, or suspect that my list is not complete, please feel free to post a comment.