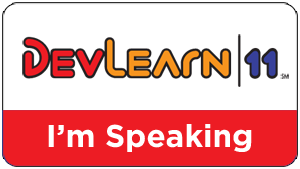 You know from this blog that it is possible to create your own question slides, using standard objects and advanced actions. That allows you to have functionalities like partial scoring, selective Retake, two quizzes in one file, etc. On the user forums I see a lot of questions concerning the default question slides, and in this post will try to list some tips about using those  'normal' questions. if you understand their functioning well, you'll be able to tweak them and perhaps avoid to invest a lot of time in creating custom questions. Beware: this will not allow you to realize quizzes with partial scoring etc! In a previous post: Customizing Review Messages I explained some of the work flows repeated here, but so many questions about this subject appear on the user forum, I thought it to be useful to have a general article that summarizes both default work flow for questions/quiz and possible ways to tweak them.
Watch this movie, where you can see some tweaking applied to.
Download QuestonTips.swf

What is typical for Question slides?

First step
Second step
Other Buttons
All objects on the questions slides have top priority, and this is the sequence of the stack:
Because of this priority you cannot cover a button with another object. Possible however is:

Retake/Review
Both buttons are available on the Score slide (see Tweak Possibilities) which can confuse the user because:
Choosing the Retake button will clear all answers in the quiz, correct and incorrect as well. The total score is reset to 0.

The action triggered by the Continue button on the Score slide depends on the Pass/Fail status of the Quiz. Default actions are Continue for both Pass and Fail. Those actions can be changed in the Quiz Preferences, Pass/Fail as you can see in this image. The whole list of actions are availabe, you can jump to different slides, open a URL/file/project, execute advanced actions etc. 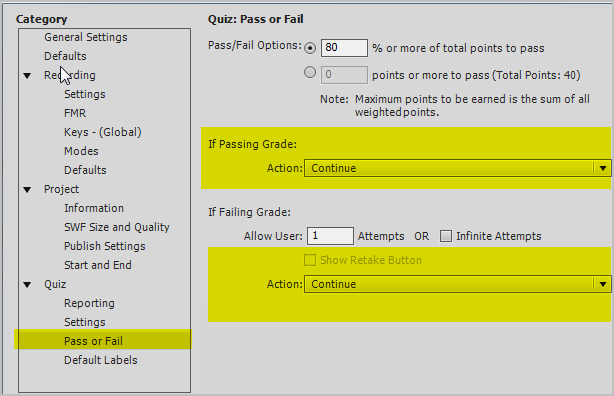 Quiz Scope
The quiz scope is a range of slides where the Quiz is 'active'. This scope starts with the first slide that has a scored object, which can be a question slide but also a slide with a scored interactive object. The scope ends with the score slide, or if you do not have a score slide, with the last scored object. Whenever the user gets out of that scope, the attempt is considered as finished if multiple attempts are allowed. Getting back into the Quiz scope will then not allow to continue the attempt. This jumping out of the quiz scope can cause issues if you are choosing one of the strict Required options in the Quiz Preferences like Pass required.

Replacing the 'Press Y or click on the slide' by a 'Next button'
OK, I do know that you cannot add a button, which is an interactive object, to any question slide. But since this step is in reality triggered by a click box that covers up the whole slide, any object that looks like a button (image, rectangle) will cheat the user to click on it, and he is just triggering the Success action of the click box.

Skipping first step of the two step process without captions
If you think it annoying that the user has to enter his answer in two steps, and you do not want to show the Correct/Incorrect text captions, just delete them. For the correct caption this can be done using the Quiz Properties panel, Options accordion. The Incorrect caption has to be deleted on the slide. In that case the first step is skipped completely: when the user clicks on the Submit button and it has been the last attempt, the Success or Failure action specified in the Quiz Properties, Actions panel are executed immediately. If you change those actions from 'Continue' to 'Go to Next Slide', the user will get immediately to the next slide. When allowing multiple attempts on question level, it is perhaps better to keep the 'Retry message' to avoid that user is just waiting, because nothing will happen. I illustrated this work flow on the first Multiple Choice question in the example: when clicking Submit, only caption that will appear is 'Retry' as long as attempts are not exhausted. When attempts are exhausted, navigation is immediately to the next slide.
Skipping first step of the two step process and showing captions and/or offer audio feedback
Little bit trickier, because you'll have to create simple advanced actions. Start by deleting all the default captions as in the previous solution. Prepare your own feedback objects:
Create two advanced actions, one to be triggered as Success action (Quiz Properties, Actions), second to be triggered After Last attempt (same place).
In this case the playhead will continue on the timeline. Be sure to move the pausing point of the slide so that time left after the pausing point is sufficient to read the captions or to listen to the audio feedback. If you want to offer the user a Next button, to continue before the playhead has reached the end of the timeline, you can use this workaround (illustrated in the second question of the example - advanced actions are in the Image Gallery, MCQCorrect and MCQWrong):
In that case you can add the static button widget that has navigational actions like 'Go to Next Slide' in its functionality list. You can even hide that button widget and show it with the Success/Last Attempt actions as well. The third question uses that approach. No need to extend the slide duration in this case. You'll have to use the static button widget with pause, CP5.5 users can download this widget from my blog: What I (dis)like in CP5.5
If you allow multiple Quiz attempts (Retake) and/or Review, you have to hide the custom text captions, fake button/button widget whenever the user reenters the slide. In the Image Gallery you'll see one of those actions 'EnterMCQ', triggered on entering the second Question slide (MCQ)

Hiding the Review button until attempts are exhausted
Drag the Retake button on top of the Review button on the stage. This is possible because the Retake button is higher in the timeline stack of the Question slides. User will not see the Review button until he has exhausted the attempts. At that moment the Retake button is hidden automatically and the Review button gets visible. This functionality is used in the example movie.
Changing Skip button to Next button during Review
The same approach as for the Next button during answering could be used, but in this case you'll need to track if the user in in the Review situation: either he has exhausted the attempts and Failed, or he passed in one of the attempts. So we'll need an advanced conditional action to check that. In the example movie I did not use this approach but hide the playbar during the quiz by a simple action 'Assign cpCmndShowPlaybar with 0' on entering the first slide (instruction slide). The playbar will be set to visible when entering Review mode with this work flow:
In previous articles I explained how to customize the Progress indicator and how to customize Review messages. 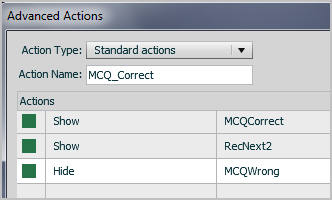