A couple of weeks ago I tried to compile all the ideas about default Quiz functionalities and tweak possibilities in a blog post: Question Question Slides in Captivate.
From a recent thread on the user forum (Quiz Results Text Styling Problem), I concluded that something was missing: 'How to tweak the Review message on the Score slide?' There is an important bug in CP5.5 concerning that review message: it is limited to 'oneliners', you cannot put a long text in it, it will not wrap, you do not have a Format accordion in its Properties Panel neither.
Thanks, Miguel, for pointing out this gap that I will try to fill up now. If you did not know it yet, I have learned about everything concerning Captivate spending time on the user forums, questioning, answering and discussing.
This post will use the same example Quiz explained in this blog post about customizing the review messages on the Question slides: Customizing review messages. Whereas that post explained the work flow both for Captivate 5 and 5.5, here I will focus only on 5.5. However the work flow will be very similar for the previous version.
Update 6.1: in this version, only available for subscribers and ASA, finally the Review message will wrap.

Watch this sample SWF to see the result of the tweaking: if you compare with the previous version about Customizing review messages, you'll see that there is a Retake option (you have 1 attempt on Question level but 3 attempts on Quiz level) and that the review messages on the score slide are customized. The Review button is covered up by the Retake button (explained in the first part of Question Question slides), so it will only be visible when you have exhausted the attempts. I did not provide a review message for the question slides when you didn't answer the question (completely). Reason: you need to use the default Review area in that case. You can adapt the text style but not the caption style itself. It should be possible with more complicated advanced actions and user variables however, adding a third Text Caption and keeping track of non-answered questions.

I reused the work flow described in Customizing review messages
However, this time 3 attempts on Quiz level are available, the user can retake the quiz if he fails. During Retake he should not see the text captions (OKx, NOKx) that were set to be visible in the previous attempt. This is a new 'situation'. When entering a question slide a user can be in Retake or in Review situation, which means we'll need an advanced action to be triggered On Enter Slide. Retake only happens
You will be tempted to use the system variable cpQuizInfoAttempts to track the number of attempts, but I couldn't find a proper solution using that var: it will be updated when an attempt starts. It will never be greater than the maximum allowed number of attempts, so I cannot use a condition like 'IF cpQuizInfoAttempts is greater than 3' to check if the attempts are exhausted. For this reason I created a user variable v_attempts that is incremented on entering the first question slide. Once this variable exceeds 3, I know that the user is in Review mode, not in Retake mode.
I created an advanced action EnterQx to be triggered on entering each question slide. It is a conditional action with two decisions for all question slides except the first one. For the first question slide there is first a mimicked standard action as a first decision. You'll find all decisions for the first question slide in the Gallery:

To have a customized Review message, I cleared the default Review Messages, but left the placeholder object partially on the stage (made it really small).
I created three Text Captions: SuccessScore, FailScore, ReviewScore, set initially to invisible.
Review and Retake button were aligned with the option 'Align and resize to the same size', which results in the Review button being covered by the Retake button until the allowed attempts on Quiz level are exhausted.
On Entering the Score slide an advanced action EntScore is triggered (see Gallery). This action is conditional and has 3 decisions: 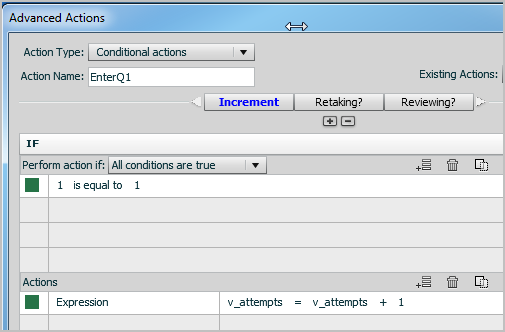