Lot of well-known Captivate users have already blogged about the new features in version 8 of Captivate, released this week:  Michael Lund and Jim Leichliter are not the only friends who published their review. If you are a regular visitor of this blog, you'll know that I don't want to talk about features before having been able to explore the final release and that I'm used to offer an article with at least one example movie to demo what I try to explain. Some will be disappointed that the included movies are not responsive projects, but a good old SWF's (sorry Mac-users). You'll see some of the less-talked about new enhancements in Captivate 8.

Watch this first movie. Focus in this project was on:

The project is showing a typical dashboard, that allows branching to different parts of the movie. For the sake of simplicity each part is only one slide in this case. The number of visits to each part is visible when returning to the dashboard. I hope you'll also discover the total number of visits to all parts in that dashboard (red number). When all parts have been visited, something happens on the dashboard. If you want to play again, you'll be able to reset at the end. There is no playbar, no TOC.

Tip: To keep it simple I limited to four chapters. If you want to store the shared actions in a Library to be used in future projects, it is better to have the maximum number of chapters you'll ever use.

As you can see in the Library, I created/used three shared actions. Only the Reset functionality uses an advanced action (not described in this article). 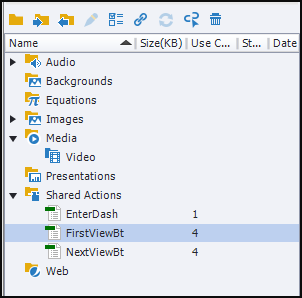 This action is triggered by the four shape buttons that appear the first time on the dashboard slide. It is a standard action, that will replace the button itself by a second version, navigates to the first slide of the chapter to be visited, increments both the general v_counter and the specific v_chx variables. The advanced action (before saving as shared action) is visible in this screenshot:

When saving this action as a shared action, the dialog box looks different from Captivate 7: 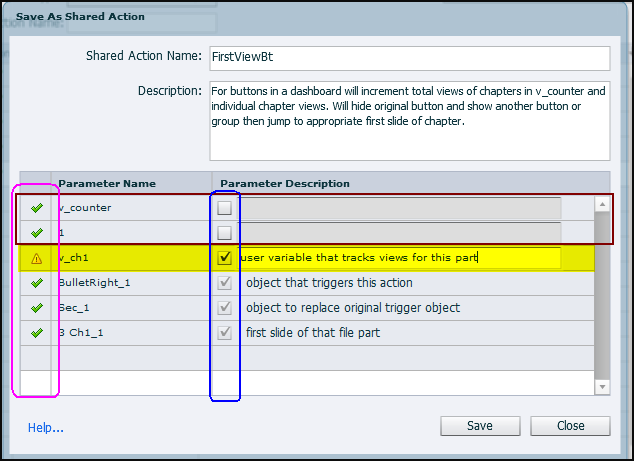 Watch the icons in the first column (fuchsia colored rectangle): before entering the description, this column will have the Warning icon for the items that are automatically defined as parameters: objects/groups. In this example 3 objects had that status: the buttons (BullletRight_1 and Sec_1), the first slide of the chapter. However now you'll also see variables and literals as possible candidates for parameters! They are normally indicated by a check mark (green) in the first column. In this example: v_counter, '1'(literal used in Increment statements) and v_ch1. To turn such a candidate in a parameter, you have to check it in the third column (blue rectangle). In this case I choose to make turn the chapter specific variable v_ch1 into a parameter. The warning icon appeared, and will disappear when I confirm the entered description. Both v_counter and the literal '1' are no parameters, since they will not have to be changed when using the shared action for a different button.

This action is triggered by the four shape buttons that replace the first view buttons (by previous described action). It is a simple version of FirstViewBt with only three statements:
Only two parameters in this case: the specific chapter user var (v_chx which was a candidate) and the first slide of the chapter (compulsary parameter). As for FirstViewBt, neither v_counter nor the literal '1' were promoted to parameter.

This action is triggered when entering the Dashboard slide. It is a conditional action with two decisions. In these screenshots you see the Advanced action from which I started. First decision 'None' will make the slide ready for a first view, second decision 'AllDone' will make the Next button (navigates to last slide) visible and do some more bonus tricks. 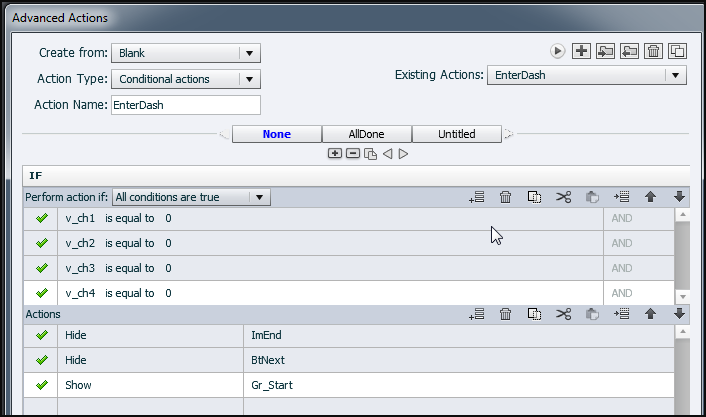 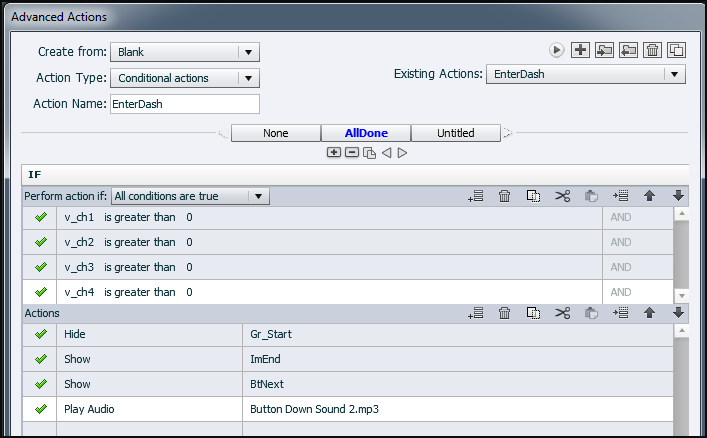 I'm smiling at this moment, because I 'hear' a lot of questions:
Or is it crystal clear? Let me know. One tip: I used the shared actions for this movie:

A while ago I published two posts as an introduction to shared actions in Captivate 7. At that moment I promised a third part about reusing shared actions in other projects. But since I was aware of the imminent release of CP8, and as a professional procrastinator, I postponed this part. I will explain how I reused the shared actions described in this article for the second movie. Watch out next week.

For those who expected a complete review or Captivate 8, sorry!  These are not the only CP8 features that I like. Honestly there are also changes that I don't like. Maybe I will post more about both when I feel capable to judge better. 'Hurry slowly' as a great friend tells me all the time. The enhancements I started to discuss today, I have been exploring already (also during prerelease) more in depth. In Dutch there is a proverb, freely translated like 'Each bird sings his own song, depending on his beak'.  I need more time for my songs.