Since Drag&Drop appeared, there are many questions on the forums about them. Although the wizard is an easy way to create quickly a simple interaction, once you explore its functionality more in depth, not everything is self-explanatory. In this post I will try to offer some tips, do not expect to get a complete tutorial.

It is not really necessary to label the objects used in a Drag&Drop for simple interactions, but if you will need to use object actions labeling drag sources and drop targets can make life so much easier. And my true fans do know that I'm a labeling freak.

This is a warning: label all objects before creating the Drag&Drop. If you change your mind and want to add or edit names after having created the Drag&Drop links, you'll break the links from/to objects that get a new or changed name. This is certainly not the case in other situations in Captivate: it is perfectly possible to change names of objects that are used in advanced/shared actions, the names will automatically be changed in the actions. This is not the case for Drag&Drop, so try to avoid the problem by labeling objects first of all.

It is a bit strange, D&D has a default Failure caption that will appear when the drag answer is incorrect, but it has no default Success caption. You have to take care of it yourself, this way:

Update: if you upgraded to Captivate 9, you can forget about this tip: it is no longer necessary to use the workaround because the Success caption (or shape) is now available in the Drag&Drop panel as an option.

Besides the actions that are executed when the user has clicked the Submit button (which I used in Tip2), you have the possibility to trigger an action by each individual drag movement. Bit weird, but in Captivate 8 you'll find those actions not as expected under the Actions tab but under the Format Tab.

You can use this functionality for several goals, like to:

What is not mentioned anywhere in the Help is the fact that if you specify a simple action (from the dropdown list), the playhead will be released as is the case for any simple action in a normal situation (remember my blog post with video on Youtube: 'Why choose standard over simple action?'). And that is certainly not what you want! By default a D&D interaction has a pausing point at 1.5secs (like normal question slides), but a simple object action will cause the playhead to continue, user will not be able to finish.

My recommendation: never use a simple action as object action! Replace it by an advanced, or better, by a shared action. For examples as mentioned above you'll probably have similar actions for all the objects, which makes shared actions the way to go. Watch this movie, you'll see what happens when a simple action is used, and how this is corrected by replacing the simple actions by shared actions.

The object actions on the slide with the simple actions (slide 2): 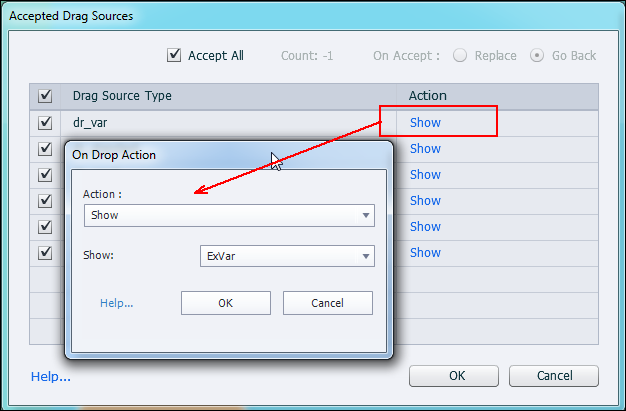 And I replaced them on slide 4 by a one liner shared action: 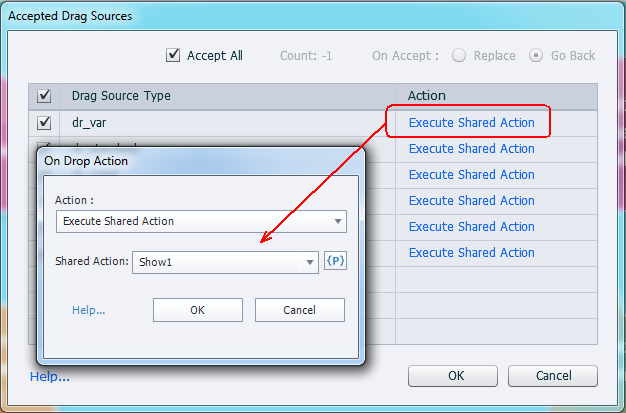 On the last slide I used a shared action as well, that hides the group and shows one explanation.