Perhaps a coincidence, but I answered this week twice a question about having a timer for a learner while taking a Quiz. It is possible to have a time limit and appropriate action set up in a LMS, but with the Timer widget that you get out of the box you can also provide this (stressful) information. Once I wrote about using the system variable cpInfoElapsedTimeMS (Quiz showing elapsed time) to display info about time spent on a slide. In this post I will try to explain the possible uses of the Timer widget. It is a small but useful widget that is associated with a user variable which allows to create advanced actions.

Use cases for Timer widget

As is the case for most of the widgets coming with Captivate, the Timer is a static widget. As I explained in the post about the Button widget (Using the button widget) this is great news, because you can use the widget on master slides and on question slides. In the example movie you will that I used the widget twice:

I will explain the workflow for both timers. Watch the movie first, I provided 10 sec for each question slide, but without any consequence if this limit is passed. For the total time the limit is 30sec and once you pass that limit you will not be able to continue with the next question but will be navigated immediately to the score slide. I re-used the questions described in the blog post (link).
Download QuizTimerWidget.swf

Because I do not want this Timer widget to stay visible on the last slide, the score slide, I created an advanced action EnterScore (screenshot in Gallery) that is executed on entering this slide with 3 statements.

Limitation: it is impossible to restart the timer widget  Since I did hide this TimerWidget (total quiz time) the widget will be invisible during review.

Since  I did not want to have an action based on this second timer in this example, it is not necessary to create a user variable, nor to point to such a variable in the Properties dialog box.

I did not hide this timer during review. You cannot hide an object that is on the applied master slide. If you want to hide it, you will have to insert this widget on each question slide and use a condtional action to test and hide the widget on second visit. Remember: you can execute an advanced action on entering a default question slide, but not on exiting that slide. Moreover you cannot trigger advanced actions by the buttons on the default question slides. If you create custom question slides you do not have those limitations, but in this post I only want to demonstrate the use of the Timer widget.

Each advanced action has to be triggered by an event. Here I chose to have this action triggered on entering each question slide. This is not really necessary for the first question slide, because the timer sits on that slide and the user variable will always be set to 0 (False). This is a real simple conditional action: if the user variable contains the value 0, the user will be navigated immediately to the scored slide (see fourth screenshot in the gallery), if not (Else action - no screenshot) the statement Continue is executed.

This means that the learner gets a little bonus: his time is not exactly limited to 30secs, if he has entered a question slide before the counter got to 0, he will be able to answer that question, but the message will pop up.
Mystery of the user variable: Want to warn you that the associated user variable doesn't store the time left, but only boolean values 0 or 1. And it took me a while to discover this. If you show the value of the user variable in a text caption (my way of debugging) it will show 'false' as long as the timer did not reach its limit and the value 'true' when time is up. So I tried out the condition 'If v_time is equal to true' but this did not work. You have to use the numerical values 1 (true) or 0 (false). This explains the decision:

﻿﻿If you use the described work flow in version 6, there are possibly some problems:

And for 6.1 users:  try using the new Countdown widget, it allows you to have an action immediately after the countdown reaches 0, contrary to the Timer widget that needs an extra event (like On Enter slide) to trigger an action. Will blog soon about the new widgets in 6.1.

Try this out with customized question slides, gives you a lot more control.
You can also create a more complex condition: if a user exceeds the time allowed for one question slide, jump immediately to the score slide or skip one or more question slides. 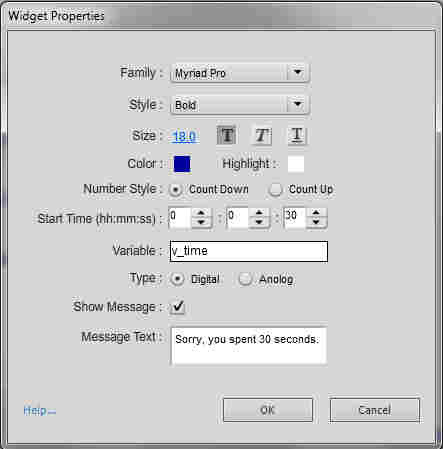