﻿The button widget is no longer available in later versions of Captivate, but can be replaced almost in all use cases described in this article by a shape button.

This is not the promised second part of the use of widgets for customized questions. You know that I find some inspiration in the user forums, and last week I discovered another hidden gem, coming for free with Adobe Captivate 5: the deceptively simple 'Button'-widget. The Adobe team seem to like hiding their gems, and always wonder why? Few people, except the widget wizards of course, do realize that this Button-widget is not an interactive widget at all, but a static widget. Check it out for yourself: in the Widget panel, set the filter to Static and you will be able to verify my statement ((first image in the Gallery). I'm used to tell my students always to verify teacher's statements

A lot has already been written about the difference between static, interactive and question widgets (a few links on the blog get you to those Widget kings), will not bother you with it. But want to explain why it is great news that this button is a static widget. Being static doesn't mean that the user cannot interact. If you have read the blog post about the use of the (static) widgets for custom questions you will know that. But the fact that is a static widget will allow you:
Isn't that great news?

There are quite a lot of configuration possibilities as you can see in the second image of the Gallery that shows the settings of the buttons I used for the example of the Menu on the master slides. It is pretty straightforward to use, I only lost some time finding out how to put in more than 4 characters on the button. You have to click in the Preview space on the button and you'll see the text box appearing (is visible on the screenshot). There are a lot of small arrows of all kinds that allow you to move the text box, to increase its size and even to increase the size of the text itself. In the list of actions that can be performed you'll find navigation, open File/URL and send email (here I used Jump to slide).

Use on Question slides

Lot of users get frustrated because it is not possible to insert any interactive object on a question slide or on the score slide. If the action you want to trigger by this object is a navigation action, or opening a URL/file, or sending an e-mail than you can use the same Button-widget as used on the Master slide example.
Some ideas:

Download KnockoutButton.swf
I would love to hear how you do use this widget! 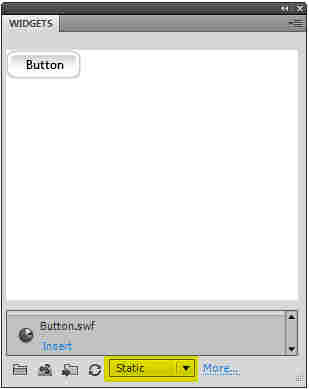