A while ago first part of my soap about using Widgets to create customized Question slides, types Multiple True/False and Multiple Choice: Widgets and Custom Question - part 1 was published. The used widgets (included in Captivate 5) were the Radiobuttons and the Checkboxes widgets. Second part was about using the TextArea widget: Widgets and Custom Questions - part 2 for Short Answer and Fill-in-the-Blank questions. Those default widgets cannot be 'reset', which means that you can change their associated variables using advanced actions, but the change will not be reflected on the stage for the user. If you want to offer the user multiple attempts that can be annoying. One of "our" great widget developers, Jim Leichliter offered an extended version of the TextArea widget as an answer to my complaint. This proves (again) how friendly and dynamic our Captivate Community is. In my last post I blogged about the improved functionality of this extended widget. And I got a positive answer on my request if he would be willing to extend the Radiobuttons and Checkboxes widgets as well. Again, he offers those extended widgets for free on his blog site:

Both enhancements were created using the 'awesome cpGears widget framework' (citation of Jim), by another Captivate friend, Yves Riels. Find him on his blog, I love his InteractiveLabel and NotePad widgets a lot, but he has a lot more widgets to offer: Flash-factor

As promised to Jim, in this blog I'll try to explain the added functionality of those enhanced Radiobuttons and Checkboxes widgets. And watch out for an important warning later on. For those contaminated with AAAD (Advanced Actions Addiction Disease) detailed explanation of the actions are explained in this companion article:

Play this SWF to get an idea of the enhanced Retry options. I did use the same quiz as in the original blog post (part 1 - see link in the Intro). But in the original version there was only a Review option, this time I added a Retry option with 3 possibilities: either change the entered answers, or start from scratch (default work flow when choosing Retake in a regular Captivate Quiz), or preserve the correct answers and only retake the incorrect ones. Explore, and would love to hear what you think about it.

Three images in the Gallery do show the configuration of the widgets I used: 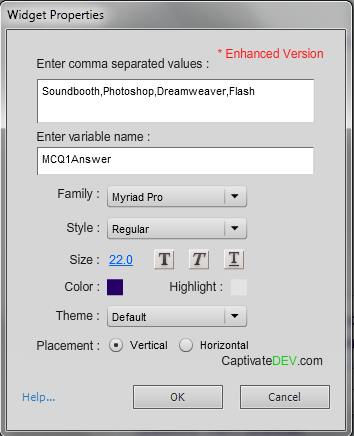