Why this use case?

I have been writing multiple articles about Shared actions (and Advanced actions), have presented webinars, trained developers.. Someone even labeled me as ‘Empress of Shared Actions’ but I still see this feature ignored by the big majority of even advanced Captivate users.  I will create a list of resources in another blog for those who want to learn more about them. This short showcase is an answer to a question posted recently in the portal. A typical use case for shared, actions, but the user tried to do it with one Advanced action. Since I couldn’t ask him for permission to use his question (being European I am respectful of his privacy), I will not point to the thread but explain the use case:

One Advanced Action? Possible but tricky

The user proposed a solution where the value of the system variable cpInfoCurrentSlide was checked, and based on that number the buttons would be hidden or shown.  One great advantage of this system variable: the index starts with 1, which is exceptional because all the other incrementing system variables start with 0. Hence the Expression needed to restart a slide from its first frame (index of cpCmndGotoSldie starts with 0):

You see that I grouped the three buttons in Gr_Buttons, contrary to the user who had several Hide commands.

Whiy is this tricky?  First of all, if you change the sequence of slides, add or delete slides, you’ll have to check the advanced action and change the literals (slide numbers). Moreover this long condition has to be attached On Enter for each slide, has to be evaluated on each slide, I don’t like that type of long conditions.  If you need to use this action for another course, you have to edit the condition, take into account the number of slides where you have to hide, and the exact slide numbers. Copying an advanced action from one course to another course is always a pain if the action is attached to a slide event, which is the case here .

I have already blogged a lot about the advantages of shared actions. The action I designed for this use case, may seem bit complicated but it needed a lot of testing and understanding of the use of parameters which are literals. You can have a look at this published file. There is no content on the slides, I just indicated in the title if the buttons had to be visible or invisible. The used master slides is different as well. Reason: when you hide all buttons, there is no pausing point on the slide anymore. That is the reason why I added a transparent shape button covering the slide, and the mention ‘Click the slide to go to the next slide. A shape with two variables is inserted to follow the changes

I used three variables in this action:

The only variable that will be changed is the first one, you don’t have to bother about the other two variables.

The Shared Action, filled in with the two parameters looks in the Preview window as follows: 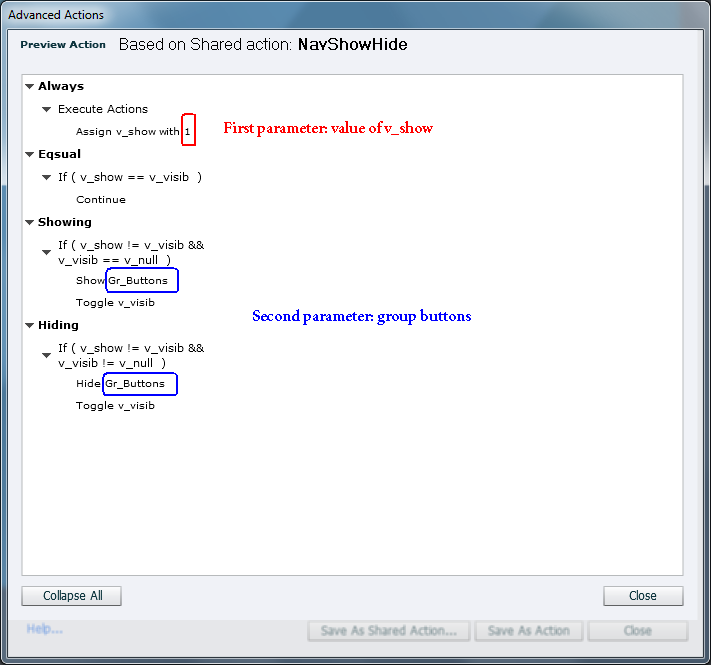 You have to add this shared action On Enter for each slide. This cannot be done for all slides at once. I’m sorry, but you always have to define the Button group as parameter, my request to be able to promote a non-variable/literal to the status of being always the same is not yet heard. The other parameter (value of v_show) has to be 0 for the slides where the buttons have to be hidden, and 1 for those where you want them visible. Here is an example for a slide where they have to be invisible. 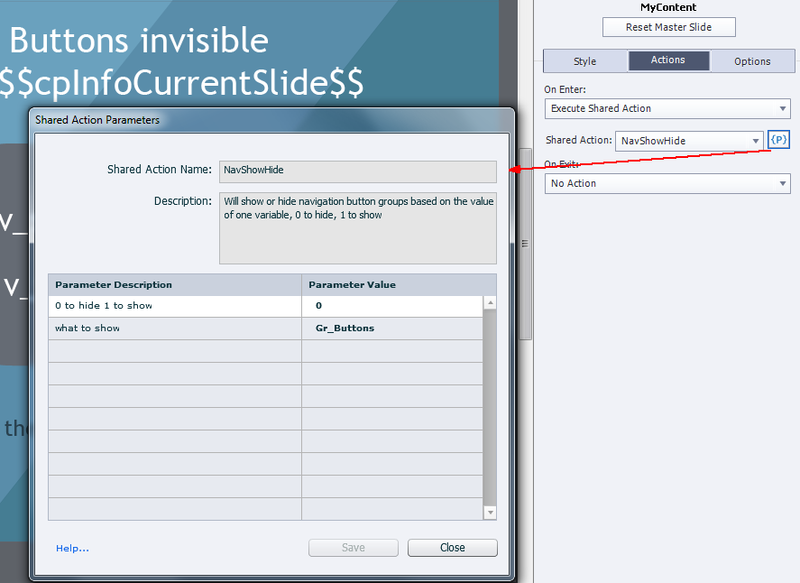 In the Library you can check the usage of the action, 10 instances were used:

As a gift for 2019 you can grab this shared action:

Import it into your course, the variables will be created automatically. You have to create only what you want to hide/show on the slides, group those objects and name them. Now you are ready to use that action On Enter for each slide. The group to be hidden/shown can have any objects, not only buttons. It is only necessary, that the group is displayed for the rest of the project.

Developing this shared action took a lot of exploring and testing because of two reasons:

I would like to explain this in depth, but not with a blog post. A webinar/training or live presentation is the only way to get this done. I expect this to remain a daydream…. very frustrating.