Update: for readers using Captivate 7-9, updated list with system variables in this article.

Quite a while ago I wrote some articles about using variables in Captivate 5. And they had links to complete lists with the system variables available in that version. Nothing much changed for 5.5 but now in version 6 there are not only a bunch of new variables, but the old variables starting with 'rd' have disappeared (from lists). At the end of the article you'll find the link to download a pdf with all the system variables, grouped in categories. For each variable I offer you the explanation (not always the same as in the Variables dialog), the type (number, text, Boolean or other), Default value (if available), comment (sometimes with a link to an example).

In this article I will focus on some tips, and on the new variables in the categories.

This category is very important, because most of the system variables here can be controlled by using simple or advanced actions. One exception: cpCmndPlaybarMoved is an internal variable, read-only.

Deprecated old variables starting with 'rd' have been replaced, in the list those names are orange instead of white. Their functionality remains the same.

This worked fine because both variables started with index 0. In 6.0 you can still create the same statement, by choosing the option 'literal' instead of 'variable' and typing in the rd-variable (not available in the list). If you do not like typing, you have to replace the previous statement by:

This explains the perhaps confusing snippets (small advanced actions) attached to the shapes in the button category. Have a look at the buttons Start (snippet: startSlide) and End (snippet: lastSlide).

New variables: only one cpCmndTOCVisible allows you to show/hide the TOC if this is in Overlay mode. It is a Boolean variable, with default value = 0, which means that the TOC is not visible.  Too bad that this variable was not added in the dropdown list for "Assign" in the Actions accordion. This list only shows these variables like in previous versions:

All the variables in this category are read-only. They are often used in combination with the Movie control vars described above.

Deprecated old variables: marked again in orange in the table:

Those variables are also read only. Most values are looked for in the fields of the Project Information dialog box. Two mystery variable are cpInfoCourseID and cpInfoCourseName.  The explanation in the Variables dialog box points to the same Project Information, but no fields are available there. I also checked if they point perhaps to the SCO information, but seems not to be the case either. Perhaps the mystery will be cleared ... in version 10?

No new variables, no deprecated ones neither in this category.

These variables are useful to insert in Text Captions on (master) slide or in templates, instructing the user to fill in the fields in Project Information.

Logically those variables are also read-only, can be useful in the same way as the variables of the previous category. Sorry for the comments about certain variables that seem to assume that all Captivate users should be American.

No new variables, no deprecated ones neither in this category.

All variables in this category are (still) read only. With a lot of new features in Quizzing, there are several new system variables available. Not enough for me, as you can detect from some of my comments in the table.

There are no deprecated old variables, all were already cp-variables.

cpInQuizScope: Quiz scope is now dynamic, whereas in previous version the scope was very 'rigid', linear, starting with the first slide having a scored object (question slide or scored interactive objects) and finishing with the score slide or - in case of no score slide - with the last slide having a scored object. No way to jump out of that sequence of slides, which caused a lof ot frustration. In Captivate 6 the scope starts the same way, but now the scope will extend dynamically when the user jumps out of the sequence to view a content slide. It will only end when the user views the score slide. This system variable, if you insert it in a text caption (on master slide or timed for all the project) will show you whether you are in a quiz scope. It will have the value 0 (default) before the first slide with a scored object. Then its values switches to 1, will remain so until the score slide has been viewed.

cpQuizInfoNegativePointsOnCurrentQuestionSlide: Penalty is now possible, and this variable will show the maximum Penalty on each question slide, it is a reused variable. Its positive companion is cpQuizInfoPointsPerQuestionSlide. Do not confuse with the points scored by the user for a question slide, which will be stored after the slide in the variable cpQuizInfoLastSlidePointScored.

cpQuizInfoPretestPointsscored:  this will be populated with the score obtained for pretest question slides only. Its counterpart for the real test is cpQuizInfoPointsscored. This last variable is visible on the score slide.

cpQuizInfoPretestScorePercentage:  is the pretest version of cpInfoPercentage (which is for the real test, visible on the score slide).

cpQuizInfoPartialScoreOn: for questions where you choose the option partial scoring this variable will have the value 1, whereas the default value (no partial scoring) is 0.

I really think some more variables should be available. If you have a look at the Advanced Interaction view (F9) for a project that has a pretest as well as a normal test, you will see that the value of Total Points is the sum of the maximum possible scores for both pretest and test: 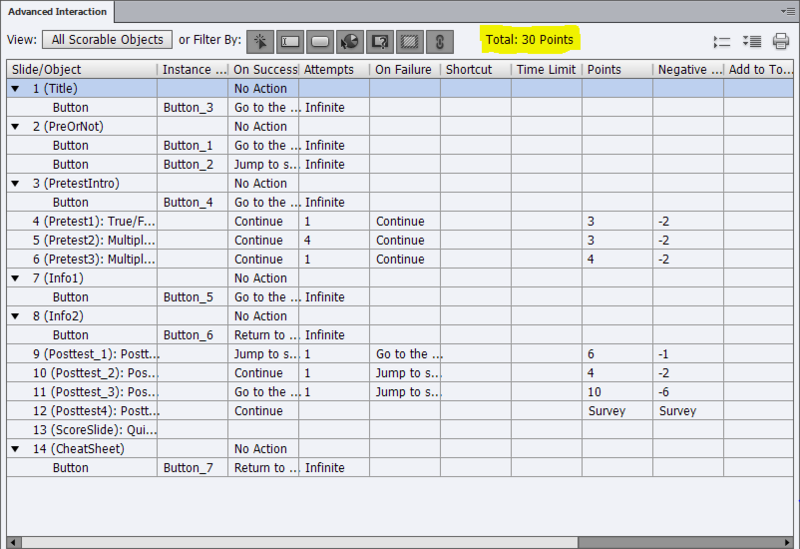 This shouldn't be a problem, you can see clearly the difference in this view between the pretest and normal test questions. But I have problems with:

The PDF is no longer available, please download the table with system variables in CP8, link is in the top of this post. There are indications about changes with former versions.