Another challenge popped up on the user forum:
"I am trying to recreate the Classic Concentration game. Does any one have any ideas how I would do this in Captivate?"
You can read the full thread here: How would I create the Classic Concentration Game?
And I tried to realise this exclusively with Captivate functionalities: no widgets, no ActionScript. There are of course limited functionalities as I will explain at the end. I have been using the possibilities of hiding/showing objects a lot in this example. For this reason I recommend reading a previous post about this subject:
Playing Hide-and-Seek with Captivate objects
In this blog post you'll find the global concept of the sample movie. Later on I will publish a companion article that will explain the advanced actions in depth.

Play with this SWF to get the feeling of the game. Only two games are available but the number of images can easily be extended without too much trouble. Have fun.
Download GameConcentration.swf

You'll find here the same subjects I explained in my previous post Look before you leap where I tried to give you a detailed view of my preparing brainstorming; the 'Leap' portion (construction of the advanced actions) will be treated in the article:

Here are the situations that can occur in the game:
This game has only 5 slides (see also Advanced Interaction View in Gallery),and you can check the timeline of the slides in the Gallery images:
Events used to trigger actions, slide and object events:

The timelines in the Gallery provide information on the objects and are pretty simple for slides Intro, Guess and End.
On slide Game you have a lot of objects (not all are visible in the Timeline image). The stacking order is here very important, as is the timing of those objects. And I really hope that next version of Cp will offer us the ability to group objects, to have them in collapsible folders on the Timeline. From bottom to top this slide has:
On slide Second all the objects set to display for rest of project (from slide Game) will be visible as well as its proper objects:

As mentioned before, I will not explain the actions in detail here (post would be too long), just the general idea of each action
EnterIntro
This action checks if the Intro slide has been visited already, if this is the case the choice buttons (North America/Europe) are replaced by the Next button, and the Welcome caption is replaced by the Sorry caption. After that check the user variable v_first is set to 1.
Bt_EU/Bt_NA
Action will populate the user variable v_choice and go to the next slide
EnterGame
Complex conditional action, that first resets the user variables v_one/v_second to empty (v_void). It will set the proper image to visible, based on the user variable v_choice. Then for each of the duos it will check if they have been discovered and display that situation (hiding the back and fore images of the cards to display that part of the image if duo was discovered), using the variables v_AE.....v_PR.
CB_11.... CB_34
Those actions will populate the user variable v_current and hide the back of the chosen card. Then either v_one or v_two will get the value stored in v_current, depending on the fact that it is the first or the second card.
CheckSecond
Action will compare the content of v_one and v_two to check if they are equal. If not, the incorrect caption will get invisible. For the correct duos this has to be checked for each possible duo (combined condition) because of the need to set the user variables v_AE....v_PR that are used for the action EnterGame. The correct caption will be visible, the appropriate user variable is set to 1 and v_counter will be incremented.
ExitSecond
Correct and Incorrect captions are hidden, navigation to the previous slide
EnterEnd
All cards are hidden (foreground and background), which will reveal the total image. The appropriate text caption relating to the image is made visible based on the user variable v_choice

Captivate is not Flash, and I'm perfectly aware that for this kind of games programming in ActionScript is better suited. I limited the number of cards to 12, but it can be extended to more cards and duos. More images to discover is easily possible as I explained before. But if you want to change the content of the cards, this will be a lot more work. It is possible to have a differentiated score depending on the number of duos that are displayed before trying/succeeding a guess. You can report easily the score to a LMS (attach it to the TEB on the fourth slide Guess) but if you want a differentiated score to report you'll get stuck like with other question slides (customized or not) because you cannot attach different scores to an interactive object based on a conditional action.

Anyway it was fun to try to create this simple game, it allowed me again to refer to the workflow and the hide/show functionalities that I explained in previous posts. Your comments are, as usual, very welcome.

Yesterday eLearnDesigner posted a comment to tell me that she discovered a bug in the game: when a user clicks twice on the same card, it will be considered as a success and both parts of the image will be revealed. Thanks a lot!

Of course I had overlooked this possibility, and solved this by changing some actions: 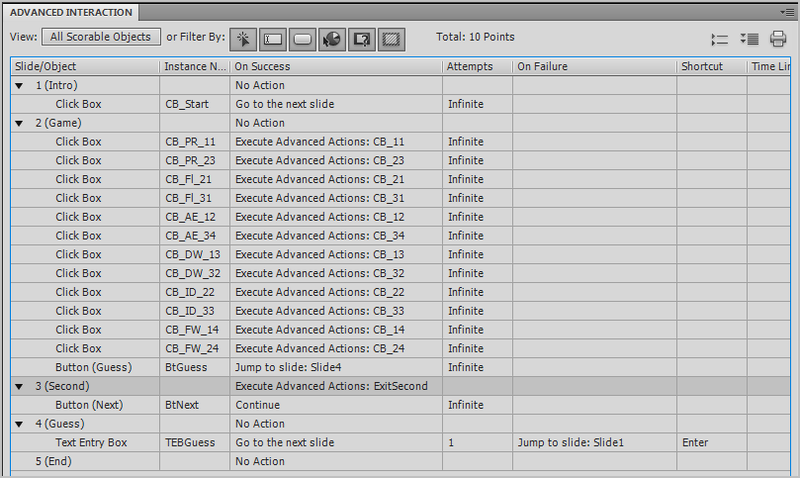