The setup however is not explained in the blog. Since another user asked about the creation of such a memory game, this blog will explain shortly the workflow. It will be limited to the game itself, not to the consequences of having succeeded it.

Besides the use of ONE shared action and ONE advanced reset action, all is based on using multistate objects, groups and variables. It can easily be extended to more than 6 pairs as in the example file. The background image, which in this case is only a static image of all the small images, can be replaced by another image (or a random image if you use JS), which can be included in the game itself. To see what I mean, I have to refer to my first version of this game, 10 years ago:

If you want to play that old game, I warn that it is a SWF.

Have a look at the timeline of the game slide 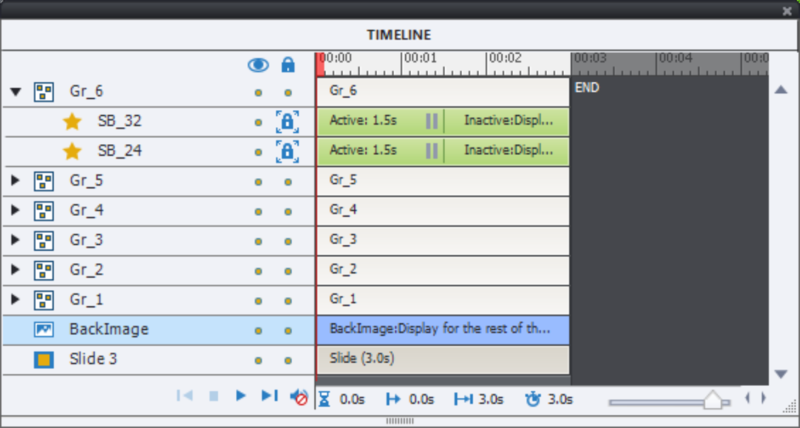 The two buttons with the same back image are in a group. There are 12 buttons, so you end up with 6 groups. The buttons themselves indicate where they are. The expanded group Gr_6 has the second button on the third row and the fourth button on the second row.  However you can set up labels as you want.

Each button is a multistate object. Normal state is the symbol for the virus, the Back state has the image. 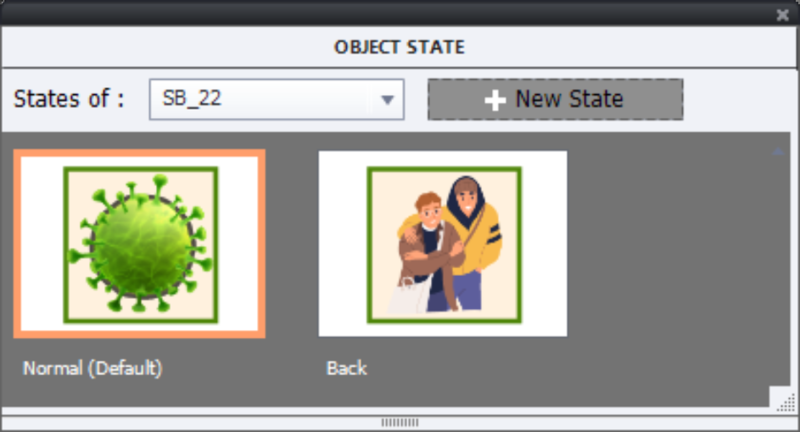 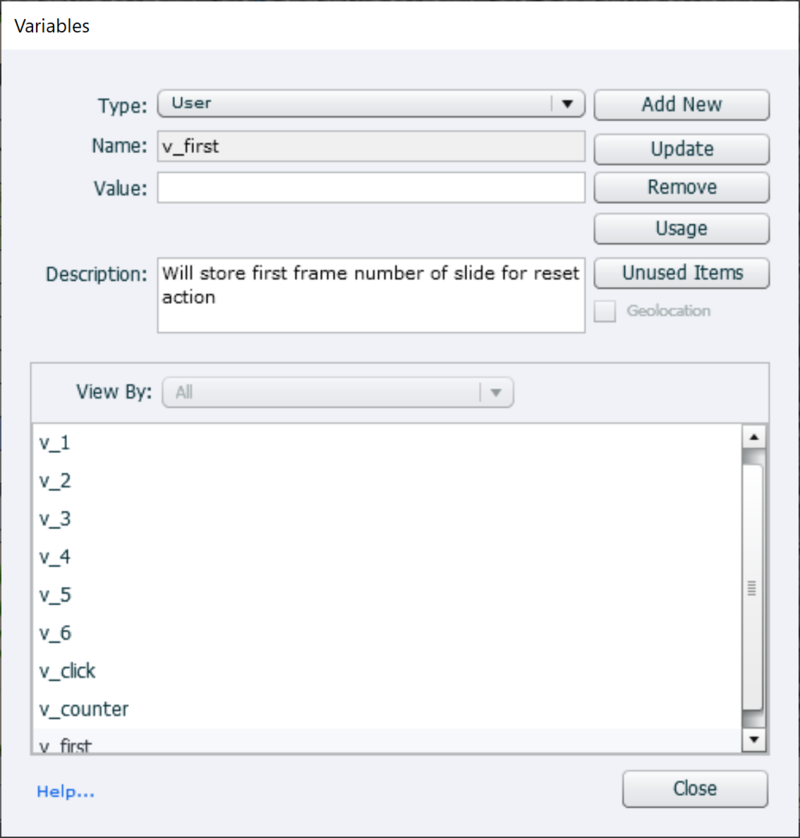 The variable v_click starts with a default value of 0. It will track the button clicks (first or second).

The variable v_counter will track the number of correct paired images. It starts at 0, and the game is finished when reaching 6.

The variable v_first is needed to reset the slide, will store the frame number of the first slide frame. For more information check: Replay or Reset?

This action is triggered by the 12 buttons, and has only 3 parameters as you can see in the preview of the action: 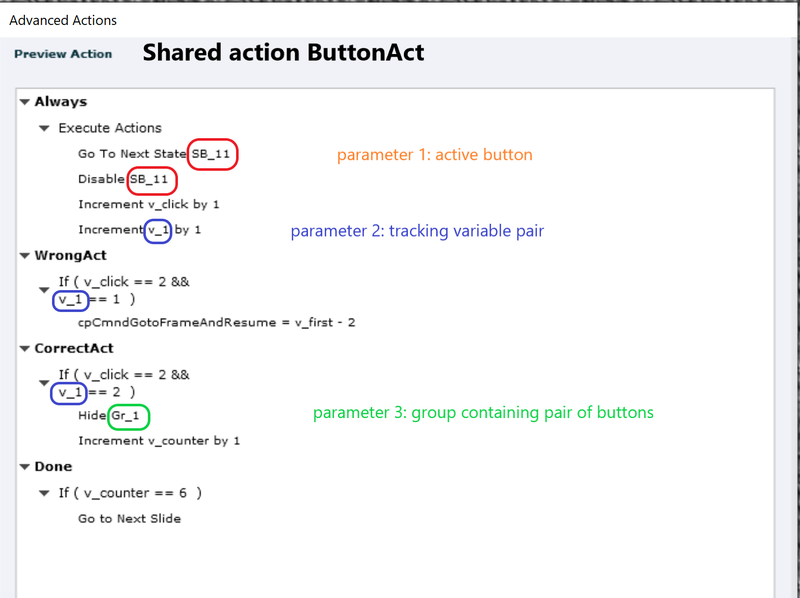 Always  is a standard action, it shows the back state of the clicked button and disables it. The tracking variable for the group and v_click are both incremented by 1.

WrongAct (conditional) checks if this is a second click, and it didn't match the first click (because v_1 is equal to 1). In that case the Reset workflow is used. The advanced action 'EnterGame' (see below) will reset what is necessary.

CorrectAct (conditional) if both clicks pointed to the same image, the variable v_counter is incremented. The group with the two buttons will be hidden, to reveal the background image.

Done: (conditional) checks the value of the variable v_counter and navigates to the conclusion slide if it reaches the value 6, which means the game has been completed successfully.

This action is essentially resetting the slide. 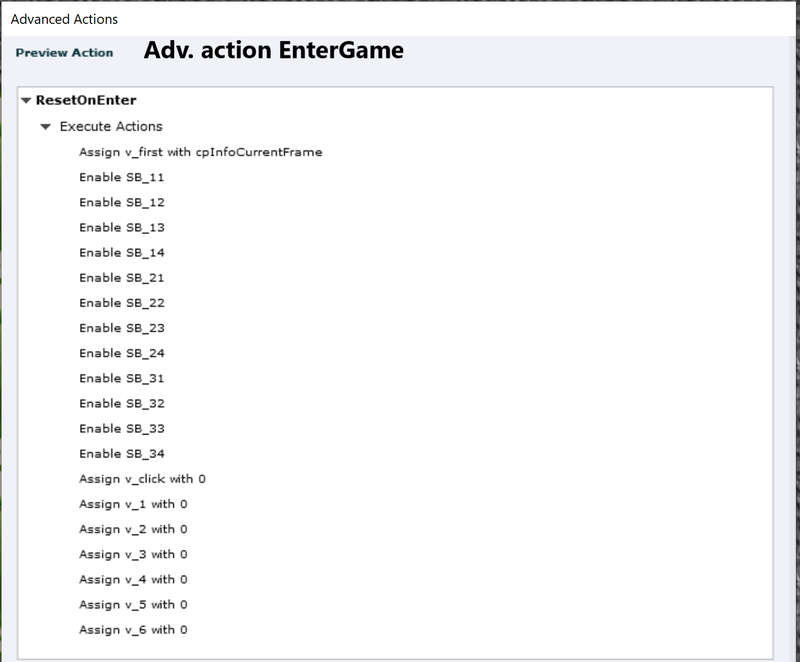 More possibilities will not need a lot of work. If you want to reuse the workflow in more projects a shared action has a lot of advantages.  If you import that action in a new project, the variables v_counter, v_first and v_click will be created automatically including their default value and description. Personally I would use the present advanced action ‘EnterGame’ to create a new shared action, keeping only the variables to reset, not the buttons. If you import that new shared actions at the same time as the first shared action, you don’t have to create the group tracking variables neither. You only have to set up the multistate objects and the groups in the slide.

It is logical that you’ll need to edit the EnterGame action. What about the Shared action ButtonAct?  Since I wanted to make the workflow simple, I kept the literal ‘6’ for the number of groups. Two possibilities for editing:

If you want to reuse this action in multiple projects, replace the literal by a variable (v_max) which you can edit in the variables dialog, or by adding an Assign command on a slide preceding the game slide.

Background image can be replaced, as I mentioned above.

It is also possible to create a more complicated game, maybe with groups of 3 buttons to match.