In my previous blog post about my preferred new features in Captivate 2017 I mentioned that the dialog box for Advanced Actions got a nice new layout. It is like new shoes, sometimes it takes time before they feel as comfortable as those old sneakers :). The focus of this article is on clarifying that new dialog box. Maybe you'll discover some unknown gems here as well? I recommend to download the example published file, or watch it (as SWF output) in that article if you are using a Flash enabled browser on a desktop or laptop.

The dialog box still has a fixed size (I wished it could be resized) and in this screenshot I indicate three sections, which I will explain more in detail below:

Nothing has changed at the bottom of the dialog box, with the buttons Usage (for the active Advanced action; for Shared actions you'll find the Usage button in the Library), Variables (which allows you to open the Variables dialog box if you want to create more user variables or check the available variables, you cannot delete variables when entering the dialog box from this button), Save as Shared Action... (will open the Shared Actions dialog box), Save or Update Action and the Close button. 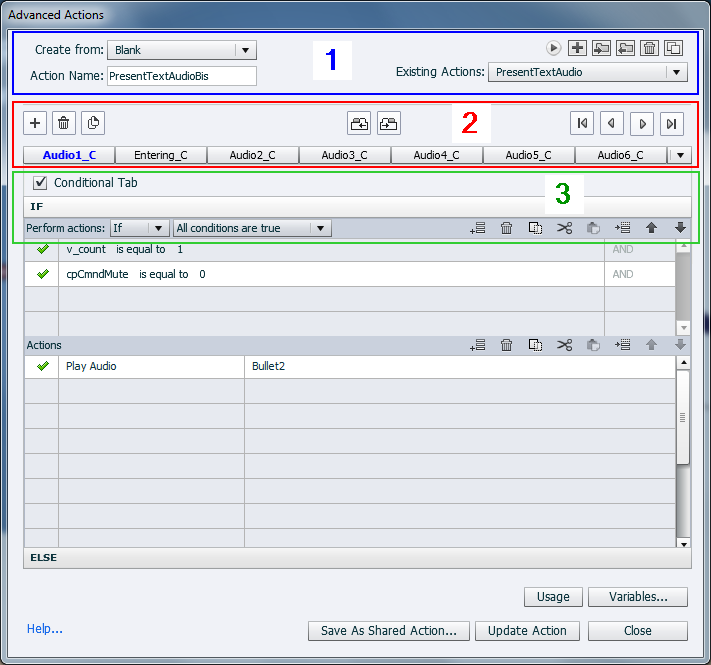 On the first row you'll have:

On the second row in section 1 you see;

This section has these items, starting at the top left:

Select a decision by clicking on its button (Untitled_x as generic name or with a custom name). It is possible for each decision to choose its type: Standard, Conditional IF, Conditional While (loop). Look below for the differences. In this section you'll see several instances of the same control panel with a sequence of 8 buttons, some having a shortcut key (I use a Win system):

If you leave the check box before 'Conditional action' unchecked, you are ready to create a sequence of commands, formerly named a 'standard advanced action'. This screenshot shows such an action and before (under Control panel of the Global section 1 I showed a Preview of such an action):

This type has only one control panel, since there is only one part in this type: the list of commands that have to be done in the chosen sequence. As told before, you can select a number of commands and paste them to the clipboard. They can be used within the same advanced action, in other decisions of any type, but only in the so-called 'Actions' part. However you can paste the copied lines also to another advanced action, with the same restriction.

To create a decision of this type, you have to check the check box  before 'Conditional action', and choose the option 'IF' in the dropdown list as is visible on this screenshot:

This screenshot shows two parts of the complete decision, to see the last part 'ELSE' you have to click on the ELSE button at the bottom of the Actions part in the first screenshot:

The three parts of this action: Condition, THEN (is not mentioned like that, second part under the Condition, ELSE have a control panel as described before. You can always copy/paste between the Actions part (THEN and ELSE), but the Condition part is 'standalone'.

The first screenshot also shows the dropdown list, because you can define different conditions with AND (all conditions have to be fulfilled), OR or a combination of both (be careful with the last option).

To create a decision of this type, you have to check the check box  before 'Conditional action', and choose the option 'While' in the dropdown list as is visible on this screenshot:

For the Conditions the situation is identical to Type 3 (AND, OR, Custom). This type has only two parts however: the Condition and the list of commands that have to be repeated as long as the condition part results in True. Two parts means two control panels, not interchangeable. But you can copy/paste from another decision or action, as long as you remain in the same part (condition or Actions).

I hope this bit boring overview was useful for you. Promised: next blog posts will be practical, still busy with examples concerning Pausing the Timeline (focus on audio). Explanation of usage of the new While loop, with some examples is on the way as well.  Not to forget: the very useful integration of Go to Next/Previous State in advanced actions: you'll get a tutorial for a user controlled or non-controlled presentation as well.

If you have questions, issues with the Advanced actions of any kind, please fire away!