Copy/Paste Appearance, new feature in version 11.5: how does it fit with Object styles? Have a look at this post:

In a first introductory post I explained the importance of Object Styles in any Theme, the terminology and how you can create a custom style based from example object (created on a normal slide). In that article I already posted some screenshots taken from the Object Style manager, but didn’t really provide an in-depth explanation of that window.  Do you need to use it? Read this blog if you want to know the answer to that question.

You can open the OSM directly from the Welcome screen, without opening any project. The option is available under the Edit menu, or by using the shortcut key SHIFT-F7. Similar to Preferences, which can also be opened from that location (SHIFT-F8) any changes made that way to object styles are global changes, which means they will be applied to all future projects. If you open the OSM within a project, the changes will be applied only to that project. Of course, since Object Styles are part of a theme, if you save the customized theme you can applied it later to any other project as well.

There are some alternatives to open the OSM:

The Object Style Manager has 2 main categories: all Quizzing objects/styles are in the second  category “Quizzing Objects”, the other objects/Styles in the first category “Standard Objects”. The triangle button is as usual meant to expand a category or a subcategory. There is one special object ‘runtime dialog box’.  Selecting an object in the top left part will show to the right to available styles for that object, and in the second half of the dialog box all the elements of the style. Down left you see a small ‘preview’ which is not always very WYSIWYG. These are the parts of the OSM dialog box. 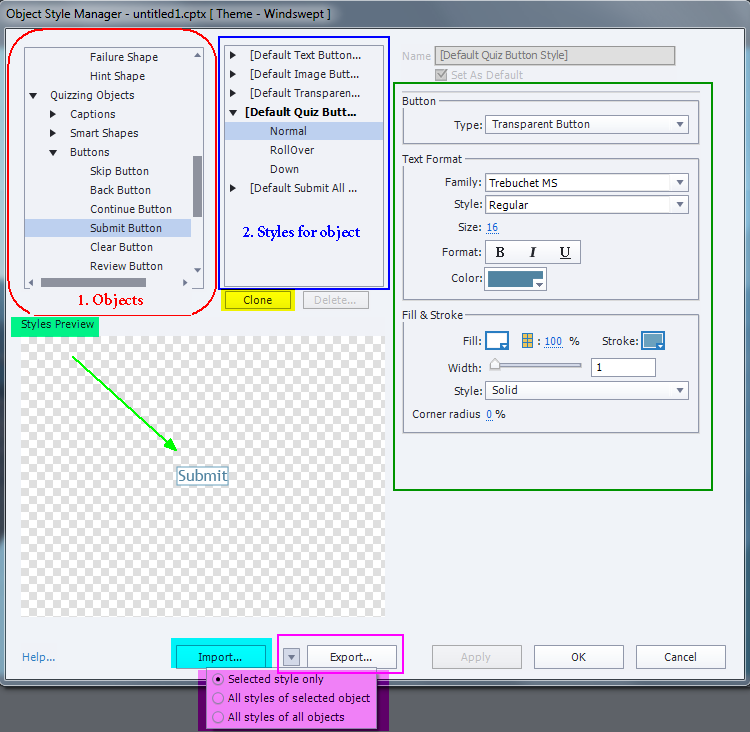 Tip: Same styles are also available for Zoom area and for Rollover Area, as well as  the new custom style, which will however not be the default style for those objects.

In the screenshot Default styles are indicated by the Bold attribute. You can change that default style using the checkbox ‘Set as Default’ which was my action for the new custom style. Be sure to put the style you suppose  to use most as Default style. I often see themes where a lot of new custom styles are created, either on the stage from example, or by cloning an existing style, but the original styles are left as default styles. Themes are meant to save time, not to increase the amount of work by having to change the styles for individual objects.

No panic needed when you forgot to save the theme under a custom name, but have edited a default packaged theme. You can always re-install the original themes from the original Gallery/Layouts folder to the duplicate folder in Public documents (Windows).

Promotion to default style can be done globally (as above) or project-based within an open project.

No one likes cleaning up! Sometimes the Styles list can become very long, and there is no way to rearrange its sequence (to have the most used styles on top).

When a style is selected in the Style box, the Delete button will become active(look at the last screenshot where the RedHighlight is selected as style). Don’t hesitate to delete what you’ll never use. That may be default styles from the original theme as well (you did see how to restore the theme above).

It is not possible to delete states (as for the Highlight box, where the Rollover state is unused), nor objects. You always have to keep at least one style for each object, and that will be the default style. If you try to delete a custom default style, you will be asked which style you’ll prefer to use as default style before the style is deleted.

When do I use OSM?

OSM is the only place where you can see exactly what is included in an object style. That was the reason I mentioned it in my first post, and showed screenshots of different types of Objects. Remember: sometimes the Transition of an object is included, which is not to be found in the Properties panel, but in the Timing Properties panel.

One example: I don’t like the default Highlight Box style, which is too ‘bland’. The line is very thin, light blue, with an inner light fill (20% Alpha). I prefer to have a striking color, from the Theme Colors palette, wider stroke and have the outer area dimmed by another semi-transparent color of the Theme Colors palette. I always create that palette before starting with the Object Styles. You have to apply the color palette to the default theme. Before opening a project I will create this global style and set it as default style.

Change Font for all styles

If the company has a style sheet,it will often include one or more specific fonts. There is no quick way to replace the used font in the theme (often Trebuchet in CP2019's packaged themes) by a company font. In that case I use the OSM and browse through all objects using text. Captions and Shapes do need the change, but if you only use Shapes as text containers, you can of course skip the Captions.  Some other objects use text as well: buttons, TEB’s, and quite a lot of Quizzing objects. Some styles with text will appear both under Standard Objects and Quizzing objects.

Beware: if you use Learning Interactions, do not forget that they do not ‘obey’ to the OSM! You will have to change the fonts there as well. Some interactions offer the possibility to switch to the Theme Colors, but that is not available for other components of styles.

What is different for Responsive projects?

In a last post I will specify what is different in Responsive projects, both for object styles and the Object Style manager. Both workflows: Fluid Boxes and Breakpoint Views will be treated in that third article.