Coincidence because this blog, answer to another forum question, is an alternative workflow to my most recent blog post about Software Simulation Assessments.

Summary of the request:

Contrary to the previous article, the slide is created manually (no click boxes are added automatically as in a simulation). For that reason I preferred shape buttons over click boxes. A shape button can be made invisible by setting Opacity and Stroke to zero.

The same idea is at the origin of the workflow: at the bottom of the Timeline, a shape button (invisible to the learner) covering the full slide is added. Have a look at this screenshot of the Timeline of the first slide (Flags):

The Success event of this big shape button will trigger the FailureAct action to show the Failure messages.

Watch a scalable version using this link. The fixed resolution version is below:

The Timeline screenshot of the first slide (Flags) shows the objects on this slide, from bottom to top:

This action is triggered by the Success event﻿ of the shape button SB_Back. The OP preferred to avoid Shared actions. You can assign this action to that shape button on the first slide, but you'll need a duplicate advanced action for each slide, because the color marked items need to be changed: 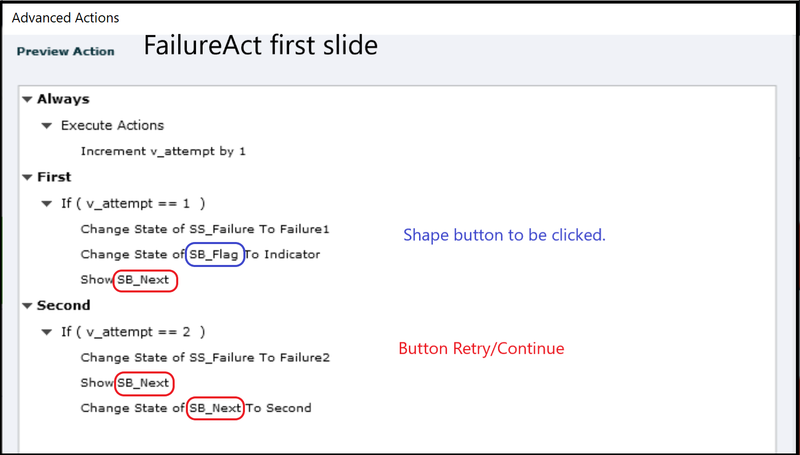 ﻿Action triggered by the Success event of the shape button SB_Next. Similar to the previous action, you'll need a duplicate action for each slide. The to be edited items are marked in color.

﻿﻿It is a very simple shared action, with only one parameter. The text of the Hint is the parameter (literal). The reset of the other items has been done or is automatically happening because the option 'Retain State on Slide Revisit' is ﻿unchecked ﻿ for the multistate objects which is the default.

The following screenshot shows how the '{P}' button is clicked and opens the Parameters dialog box where you enter the parameter:

For the Success situation I just kept the default Success message. This is the Actions tab for the shape button SB_Flags and similar: 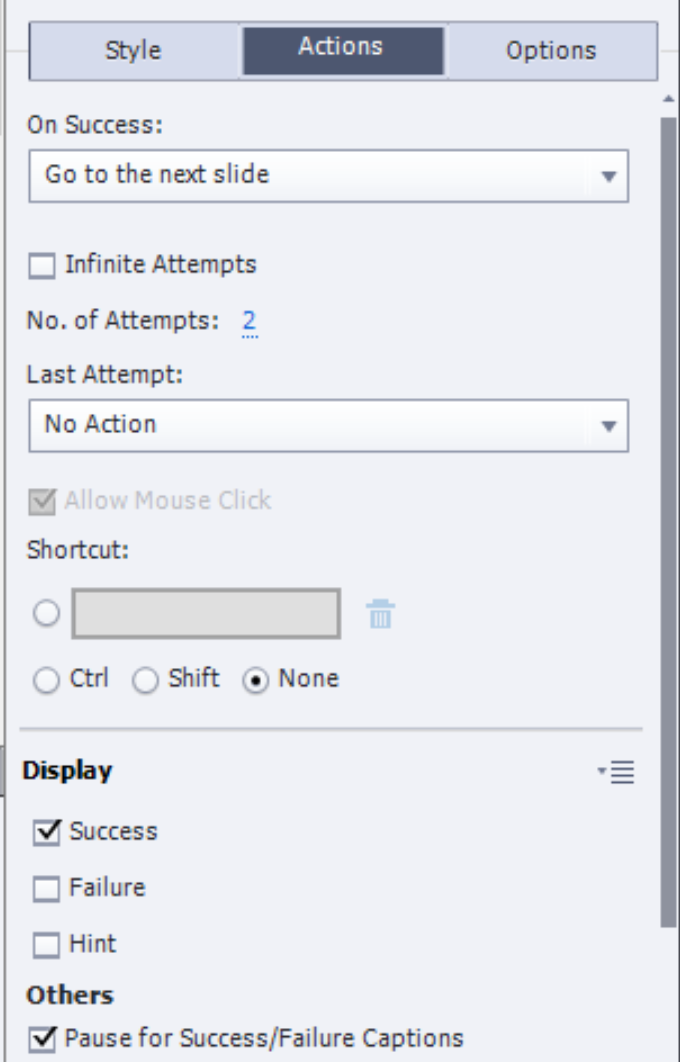 Two messages are allowed, Success 'caption' (is a shape) is activated, and the Last Attempt action is set to 'No action'.

The Advanced Interaction panel shows which actions are attached to which events: