In the previous blog post I introduced you to the common JS API, and you used the method 'setVariableValue' to populate a variable defined in the Captivate project. That value was a random number generated in the JS window, using the Math.random() and the Math.floor methods. The values were integers, between fixed numbers 10 (included) and 100 (not included). In this second article you'll learn to know a new method 'getVariableValue' from the JS API, which lets you transfer a value to JS. We started with the mathematical operation 'Sum', now we'll switch to 'Subtractions' needing again the command 'Expression'. Because CP cannot handle well negative values, we'll have to take care of that as well.

The progress bar introduced with the Sum exercises, will be continued. You'll see that it is possible to change the state of an object, displayed for the rest of the project, from a slide where that object is not inserted.

Subtraction will be with two terms, always integers. Whereas in the Sum slide I decided that all terms would have to be between 10 and 100, on this slide the user will be able to choose a Maximum number, and if he wants a Minimum number. The minimum number has already a default value of 10, which can be changed by the user, the maximum number is empty. The Max value needs to be bigger than the Min value, if that is not the case, the Max value will automatically be set to 'Min + 200'.
The same sticky figure (with states) and OK button (with state New) are used as described in the previous post for the Sum slide.
This Subtract slide can only be visited when 5 correct Sum exercises have been done, hence the 5 stars on the progress bar are in place on entering this slide. The progress bar is set to display for the rest of the project, and you can change the state (to 6 or more stars) from this Subtract slide, although the progress bar is not visible in the Timeline. New stars can be added after a correct subtract exercise, and after 10 stars, the Next scenario is executed (same as on Sum slide).
Here is a slide preview, after answering the first correct subtract question: 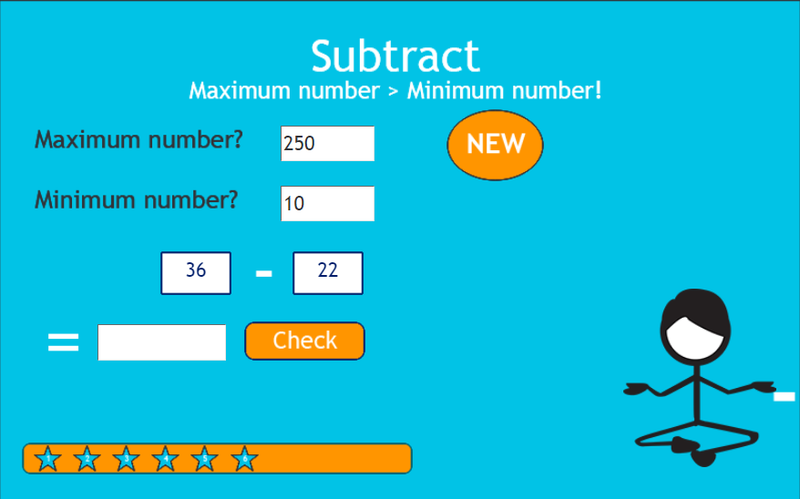 The same multistate objects are used as on the Sum slide (see state panels on previous post):

In this slide I only used TEB's, which I can control due to the presence of the CpExtra widget (InfoSemantics). The consequence is that this description is only valid for HTML output. For SWF output the TEB can be replaced by a Scrolling Text Interaction:

To make the next state of the sticky figure interactive, it is covered by a Click box CB_Next2.

This is the Timeline of the slide: 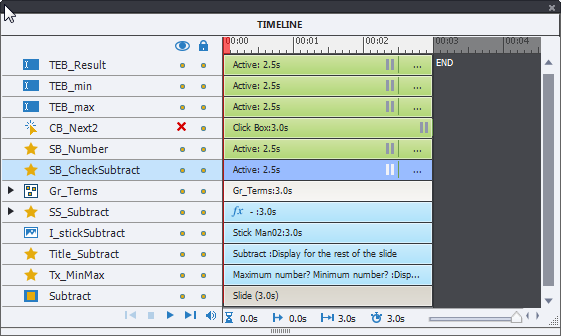 Some variables created for the Sum slide are reused:

Shared actions were not possible. One Standard advanced action was needed (to reset vars) and two Conditional actions.

This very simple standard action, triggered by the On Enter event of the slide, clears several variables that are reused from the Sum slide: 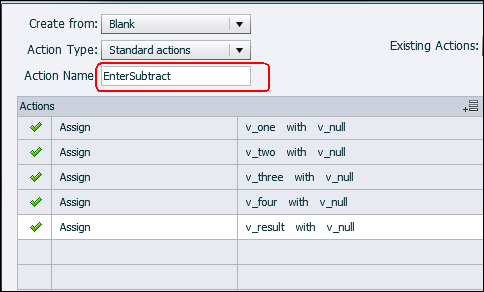 This conditional action is triggered by the OK/New button SB_Number. It has 3 decisions: 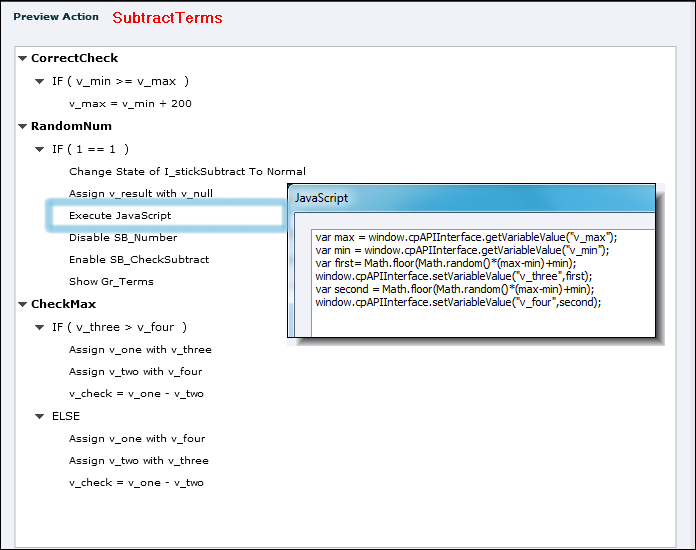 The first decision 'Checker', will check the entered value (v_result) with the correct value (v_check). It is the only decision with a Then and Else part. For correct answer, the state of the sticky character is changed, the counter (v_progress) is incremented,  the state of the button SB_Number is changed to another state and enabled again, while the button SB_CheckSubtract is disabled. For an incorrect answer, the counter is not incremented, and the sticky character is changed to another state.

The 5 other decisions 'ProgressXxxx' check the value of v_counter and show the appropriate state for the progress bar. The last decision 'ProgressTen' will also change the sticky Character to its state GoNext and enable the click box to proceed to the next slide (subject of the next blog post, with Multiply exercises). 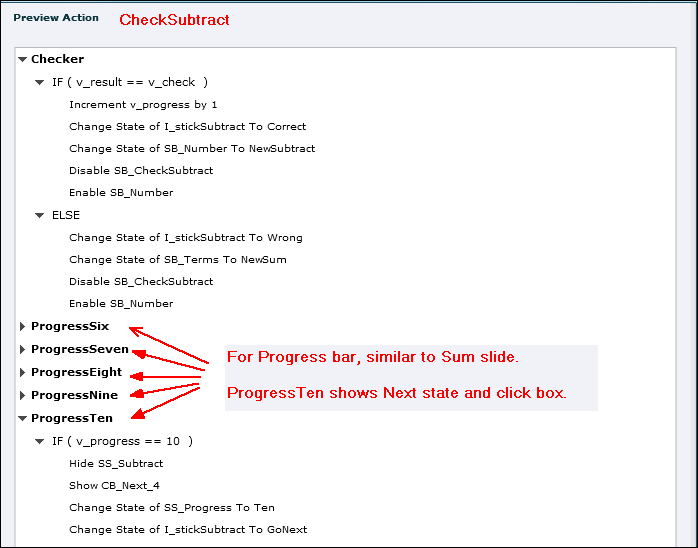 In the previous post you learned to use 'window.cpAPIInterfaceSetVariable (x,y)' method to populate a variable x (to be entered as a string between quotes) with a value y. You calculated y by using a combination of two Math methods in JS:

For the sum slide we used a combination of those two methods, to end up with a random number between 10 and 100 (not included):

For the Subtraction, the maximum and minimum values are not fixed, but stored in Captivate variables v_max and v_min. Due to the first decision in SubtractTerms action, we are sure that v_max > v_min. Those value will be transferred to JS variables with the method 'window.cpAPIInterfaceGetVariable(x)' where 'x' is the name of the Captivate variable, entered as a string (between quotes). Example:

Instead of the fixed values 100 and 10, used for the sum slide, you use this time min and max to generate a random number between min and max. The two random numbers are stored in variables v_first and v_second. Since they are random, we do not know yet which one has the largest value:

You are already familiar with SetVariableValue to store the result of first in v_three - Captivate variable, and second in v_four.

You earned a second star, soon a third part will be ready, up to multiplications and bit more of randomness.