In my first blog post  and video about the recently released Captivate 6 I mentioned that my favourite feature is not Themes (certainly not :-)), nor HD Video, nor HTML5 publishing, nor Quiz enhancements, nor Actors/interactions but the new Shapes! Beware: I do not love them because of the design of the default shapes (why not enable adding custom shapes, or inserting SVG-images), not because of the editing possibilities (too limited, lacking tools for editing Bezier curves like pen),  little bit because they are vector-based, but really because they double both as Text containers and as BUTTONS!

Today I want to show you why Shape buttons are for me the feature that will save me a lot of time.

Difference between buttons and Shape buttons

Both regular buttons and Shape buttons have the same list of possible actions (on Success/After Last attempt), including the possibility to execute an Advanced action or Javascript.

Creating a custom shape button is easier than creating a normal button: you can use one of the default shapes, convert it to a freeform shape and edit to your wish. You can fill it not only with a solid color, but also with gradients, with textures or with an image.

The real value of a Shape button over another button (or click box) is:

Here are some negative points:

A normal button has three states: Up, Over and Down to show user's activity, the Shape buttons are more limited: when pressed the image will shrink a little bit. For small shapes this is not that visible.

Contrary to normal buttons, a shape button cannot have a score attached to it, nor report to a LMS. They will show up in the Advanced Interaction view (F9).

After checking the option 'Use as button' in the properties panel, you can choose to have a Hint caption (no Success/Failure captions possible), to show the hand cursor, have a double click and opt for a click sound. All those are to be found in the Options accordion.

As I mentioned before no label cannot be attributed to smart shapes on a master slide. They all show up the same way on the Timeline panel as you can see in the screenshot. 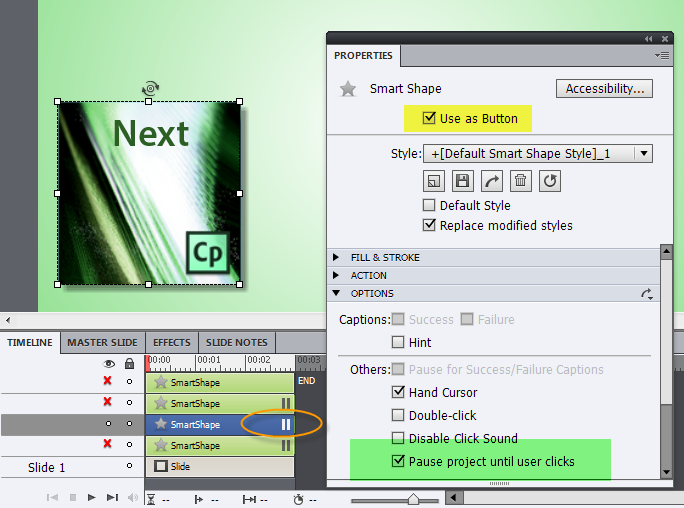 Shape buttons on Master slides are great if you want to have them on all slides (Main Master slides) or on a lot of slides (normal master slides) and you do not need the ability to change them on individual slides. Some examples:

Such a shape button, on a normal slide, can be labeled as you can see in the screenshot below.

Check the same option 'Use as button', and in the Options panel you'll find besides the Hint, now also Success/Failure captions. You'll miss the Pause option here, because it has been transferred to the Timing accordion that is now available, just like for normal buttons.  You can time the pause, but be careful: this setting will apply to every slide, and is not dependent on the slide duration, so do not pause too early. You can delay the timeline for the button, which is not possible for shape buttons on a master slide. In the screenshot the shape button, timed for the rest of the project, will show on each slide after 1 second and pause after 2 seconds.

I checked the option Place Object on top, to avoid that the shape button could be covered by another object on the slide or on a master slide. This is not always necessary, but you have to be aware of the shape button being at the bottom of the stack if you do not check this option. 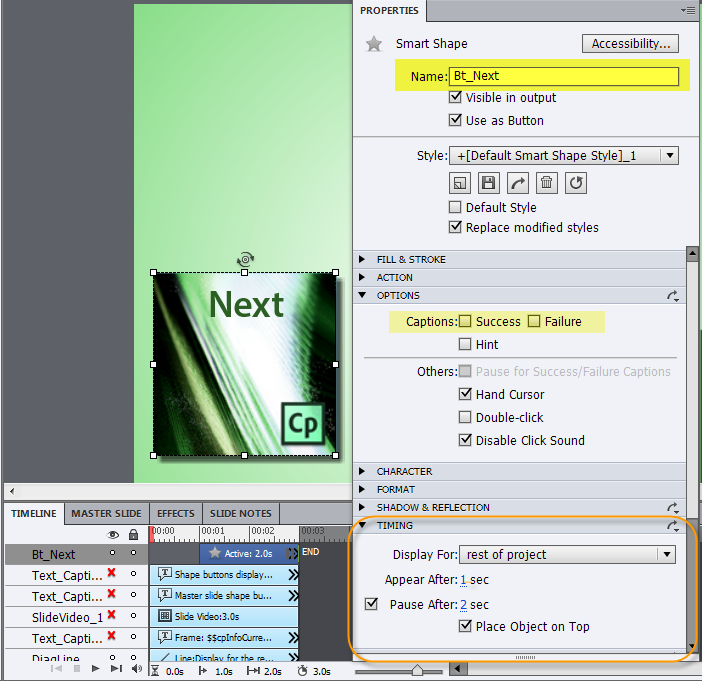 Shape buttons timed for rest of project allow you to time the pausing point or the duration of its timeline on each slide but they are really better suited than shape buttons on master slides if you want to hide/show them on some slides without having to create another master slide. And they are also great if you want to simulate a changing button to indicate the state when toggling. Here are a couple of examples:

In the Smart shape flyout panel you'll see a category 'Buttons'. Have a look at them, most have a simple action attached to them (Go to Last Visited slide, Open URL/File), but some trigger an Advanced action. And personally I hope that we soon will be able not only to create and save custom shapes in that panel, but also to edit/create the advanced actions attached to them.

Some examples of (advanced) actions for the buttons category:

I hope you understand why I like the shape buttons that much. And I will try to post more about them: tips to change the advanced actions, how to create changing states for toggle buttons etc. Let me know if you have other suggestions, please, post in a comment.