As promised, here is the second but not last part of my soap about using (free) widgets to create customized questions. One of the most versatile widgets for this goal is the TextArea widget, it will be the only 'star' today. Not only is it a very fine alternative for Text Entry Boxes because it allows for better formatting, text wrapping and if necessary the appearance of a vertical scroll bar, but it can be associated with a variable, which makes it accessible ...for advanced actions!

In this blog post I will explain how to use this widget and its possibilities, In detail explanation of the advanced actions can be found in this article

Explore the TextArea widget by playing this movie. It has and intro-slide, 4 question slides and a score slide:

On the score slide you will be able either to Review the questions or to Retry all questions and increment your score.


This widget can be associated with a user variable, but you will have to define that variable separately (Project, Variables), same way I described for the Radiobuttons and Checkboxes widgets in part 1 (Widgets and Custom Questions - part 1). The first image of the Gallery shows the properties of the widget used on the first question slide (about roundtripping), WidgetRound, . Those properties are easy to configure, and the user variable is v_roundtrip. When exploring this widget I was excited by the fact that this variable will store the complete text that is entered. This looked like a promise for multiple possibilities in Short Answer questions. I never used the default Short Answer question because the score can only be attributed if the Short Answer is totally correct! And this is rarely necessary as I heard as well from other users on the forum. Usually the short answer should get a score when it mentions some keywords, not when it is exactly the same as the "correct entry".

Tip: while exploring this widget I detected that it will only be functional if it has its place in the Z-order (stack order) on the timeline above all interactive objects. In the Gallery the second image shows the Timeline of the first question slide about roundtripping. On this slide ShortAn1 you'll see the stack order from bottom to top:

This question has a score of 5 points. This score will be attributed if the answer contains both the keywords Photoshop AND Soundbooth. Probably some users will also add Powerpoint, but this will not be taken into account for the score.  It is annoying that not only the names of user variables are case sensitive but also the values! I assumed that users could type both Soundbooth and soundbooth, Photoshop and photoshop to create the unique but complex condition for the Submit button. You can see the settings for the Widget and the objects on the timeline in the Gallery.
The Buttons Submit and Continue are timed, the Continue button will only appear after the Submit button has been clicked, same setup as described for the custom questions in Part 1.

Up to 4 keywords can result in a score, each keyword adds 2 points, the max. score thus being 8 points.
Setup of the widget and the objects on the timeline are the same as for the first question. The big difference is of course the advanced conditional action attached to the Submit button. Here it is a combination of 4 different decisions, one for each keyword.


3. Short answer - one out of two keywords

Two possible correct keywords (Flash + Dreamweaver), but the user needs only to have one mentioned in his short answer. The situation is the same as for the first Short Answer, with one condition in the setting 'Any of the conditions true', but again taking into account the case sensitivity. Widget Properties and objects on the timeline are similar to the first question.

In the third image of the Gallery you will see the Timeline of this slide, that uses 3 instances of the TextArea Widget. Perhaps you wonder why I prefer TextArea to Text Entry boxes? The user input in a TEB has to be confirmed, either by  a Submit button or by a shortcut, which is not the case for TextArea. The user can change his input if he wants and the value of the associated user variable will be adapted in real time.
Possible issues: you'll have to try a little bit to have the right size and position for the widgets. I first typed the correct terms and positioned the widget on top of those, but had to adapt the position even with the same font/fontsize.
In this FIB you cannot give the user the possibility to choose from a dropdown list, only to type the answer.

Partial scoring is however possible, the advanced conditional action attached to the Submit button is rather similar to the one used for the second question (Short answer with partial scoring). Again you have to take into account the case sensitivity.

The results slide has the same setup as described in my first blog post about Widgets and custom questions. To allow the Review/Retry I used a user variable v_try that will have 3 possible values:

Those values will be used to re-initialize each question slide (see article).

One drawback of the used widget: it is not possible to reset the value of the variable to void/null/empty! You can reset the associated variable to a Null value, but this will not be reflected in the display of the TextArea on the slides. Once the user has entered something, it will stay there until he changes it himself. You can watch this with the Retry functionality in the sample SWF. 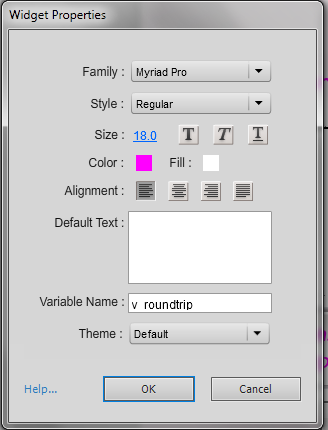