If you have read my article about the 3 most important stumbling blocks for Captivate (newbie) users, you'll know that Themes are amongst them.  The components of themes are described in What's in a Theme/template. and in this post you'll learn about he use of Theme colors. Almost daily I see questions, comments on the forums like "I don't use a theme" which is  - sorry for the word - nonsense because every project is based on a theme. The theme with the least intrusive design is the Blank theme, which has no color palette and only offers the minimum set of 6 master slides.
The themes packaged with Captivate 2017 have some issues with the feedback messages:
Shapes are set as default for feedback messages, not captions

The feedback captions use an appropriate style in the themes Easiest way to solve the problem would be to change Preferences, Defaults and choose for captions if that is not messing up your design.  Below you'll read how to ecit the themes.

Where are default Themes stored?

The original themes can be found under the installation folder, in the Gallery\Layouts for the language you used when installing. I am on Windows, installed the US version of Captivate and the path on my Win system is:
C:\Program Files\Adobe\Adobe Captivate 2017 x64\Gallery\Layouts\10_0\en_US.
You'll also find the ThemeColors folder in that location. The included themes are: (Blank), Blue, Clear, Clean, OldPaper, Poise, Suave, White (which is the default theme). All themes are responsive, but can be used for normal, blank projects.
However, while working with Captivate, you will use the themes from a copied folder. In Windows that copied folder can be found under
Users\Public\Public Documents\Adobe\eLearning assets\\Layouts.
Reasons for this work flow are possibly:

If a theme seems corrupted or is too messed up, you can always restore it by copy/paste from the Gallery (need for administration rights). If you have both CP9 and CP2017 installed, you'll see both Layouts in the copied folder. But the layouts folder for CP2017 has a subfolder 'bpthemes' containing all the CP9 themes on my system (not sure if that is the case when you only have a CP2017 install).

TIP: don't put custom themes in the sames folder as the default themes (Public). If you have to restore all themes by deleting the Layouts folder you will not lose the custom themes. I store them mostly with the project(s) they are used for.

Restoring the correct object style for the Failure and Hint shapes is pretty easy: open the Object Style Manager (SHIFT-F7), and replace the Success style by the appropriate style (which does exist) as you can see in this screenshot
image 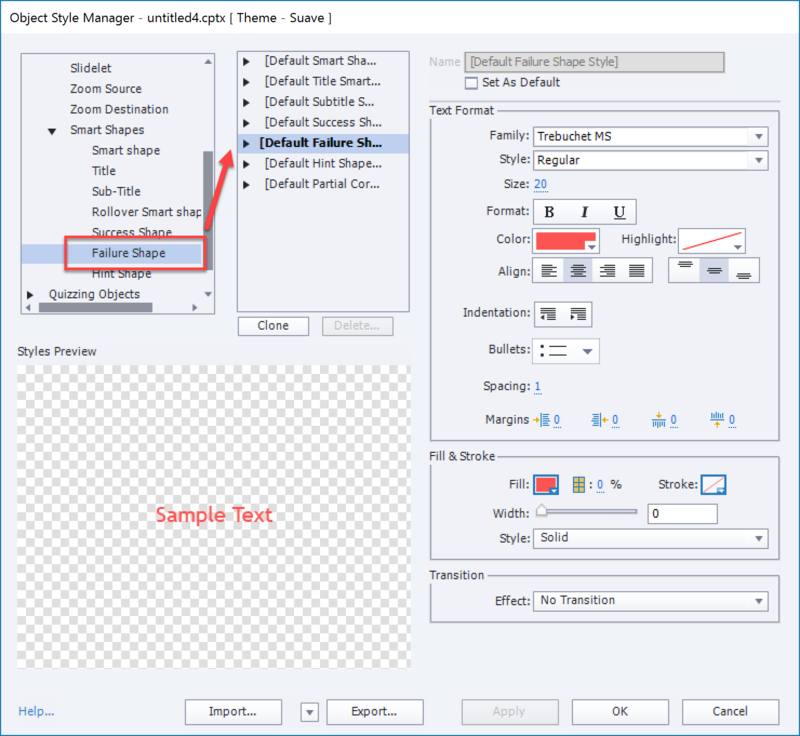 I suspect you will want to keep the correct object styles for the feedback messages for future projects as well. Use the menu Themes, option Save Theme.  The result will be that the theme is edited in the copied folder, in the Public documents To change the original theme in the Gallery, you'll need to do it outside of Captivate, using Explorer and needing administration rights. However a user yesterday reported that the option 'Save Theme' was dimmed(?).  Reason was that he was working in a blank, normal project. All default themes in CP2017 are responsive. To protect the responsiveness, you have to edit the theme from within a responsive project. The option 'Save theme' will be available in that case. You can always use a responsive theme in a normal project.


In a previous blog post I explained the ins and outs of the new Advanced Actions dialog box. If you feel confused about my terminology in this more practical blog post, please read that first article. A decision block of type 'While' is totally new in version 2017. It has some similarities with the Conditional decision block (IF, Then, Else) but offers new possibilities as you'll see in this simple game.  The While loop can be used to create a looping sequence of commands. That loop can be infinite, or limited in number of executions, based on one condition or a combination of conditions.  Mohana Das from the Adobe team published recently this article demonstrating the infinite While loop. Please read that article, for users familiar with advanced actions the used condition 'IF 1 is equal to 1' will be easily recognized, since this was the condition needed to create a mimicked standard action decision in older versions. It means that the sequence of commands will continue to be done, since that condition always results in True. In a future blog post, I will offer some tips about breaking such an infinite loop.
The present article  will focus on using the While loop, based on a condition which results in having the commands sequence repeated a limited number of times. It is a very simple game, every object was created within Captivate. One exception: the color shift in the Characters was achieved using roundtripping with Photoshop.

It is not a responsive project, to avoid a too long article (should have to explain setup in fluid boxes with logic of the variables and advanced actions). Maybe in a next article?

Download this published folder (HTML5). Sorry, cannot embed it in this post (allows only SWF's and it is not playing well in Flash output). Unzip the folder, launch the index.html file to start playing.  It is a small game: when you click on the Play button, a dice will be rolled and you'll see one of the faces of the dice, indicating a (random) number. The girl is supposed to climb the stairs, she will go up as many steps as the number you won. The goal is to reach the top. When the girl reaches the top of the stairs, clicking on the Play button will result in another scenario, and a Reset button will appear.
On entering the Game slide you'll see two looping animations, with added randomness and a possibility to stop the the looping. You'll see this action in Preview, but I will not provide details. 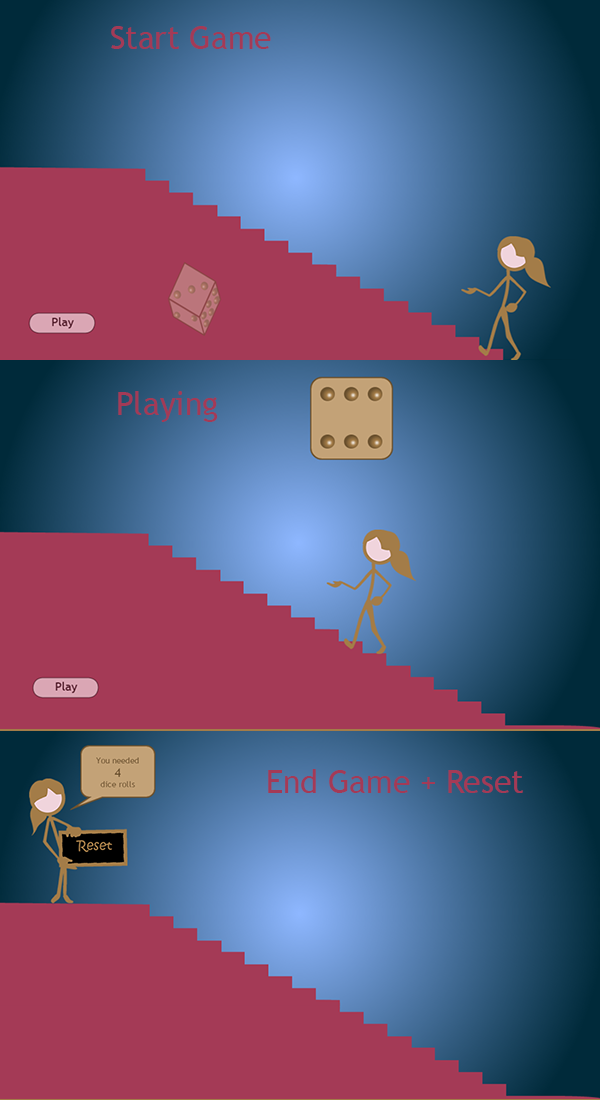 
Have a look at the timeline of the Game slide: 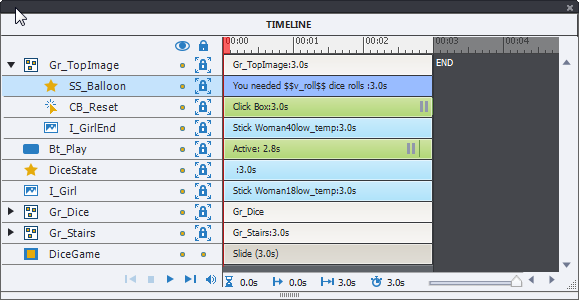 I created the stairs as a freeform shape. That was pretty easy with Guides (see Guides Rule) and Snapping to guides. Of course a better approach would be to create that shape in Illustrator with export to SVG, but it is always a challenge to use only the available Captivate tools.
Dice: this is a multistate object, the normal state is a square shape, for each of the sides circular shapes with a gradient fill are added. Look at  the Object state panel for this object. 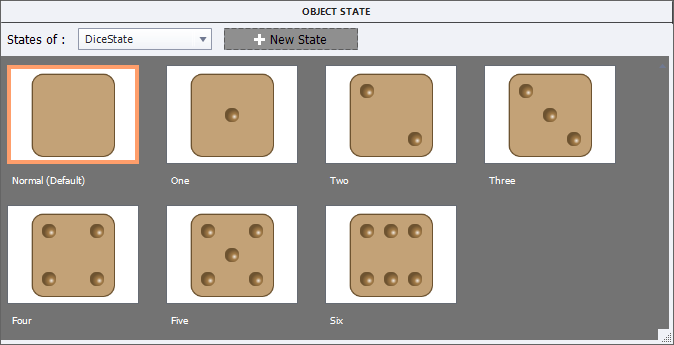 The 3D animated dice has also been created as a group from a lot of shapes.
Effects - Characters
Two custom motion effects were created for the climbing girl. Default effects couldn't be used in the advanced action, because the path had to be edited. Here are two screenshots of the custom effects: Impatience (before starting game) and StepUp  (during play). 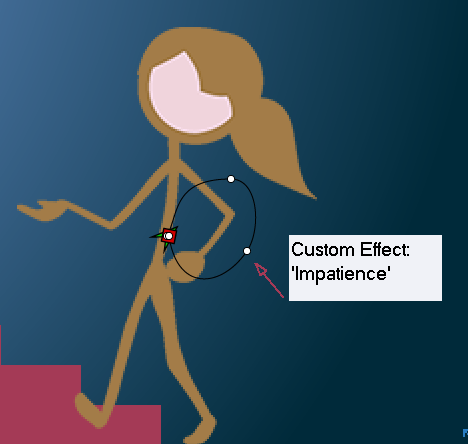 The original Character (climbing the stairs) will disappear with a default Exit effect 'Zoom out'. when the top is reached.
The Sticky image that replaces the original one climbing the stairs, will get a default Entrance effect 'Drop in and Bounce'. The text panel in that image is covered with a click box, functioning as a Reset button.
Play button: is a simple transparent button.

Variables (for game only - more are needed for the start animation)

For the EnterGame action a 6th variable v_anim is used.

The three used events for the game are:


I couldn't use Scenario 2 of the Replay Slide blog post.  There are a couple of reasons, one being that the Game slide was originally the only slide. It is never a good idea to start a project with a complicated On Enter action (as is necessary for the looping animation). The workaround is to have a short dummy slide (mine is 0,2 secs) before the game slide and use this Reset action:

Due to the command 'Continue', the On Enter action of the game slide (second slide) is always executed. At this moment for HTML5 output this is not the case when using micronavigation (as in the blog post about Replay slide).


The PlayAct has 3 decision blocks, one of each type: the first decision is a standard action (sequence of commands), the second is a While loop based on a condition and the last decision is an IF condition, in previous versions labeled as a conditional action. Here is the Preview: 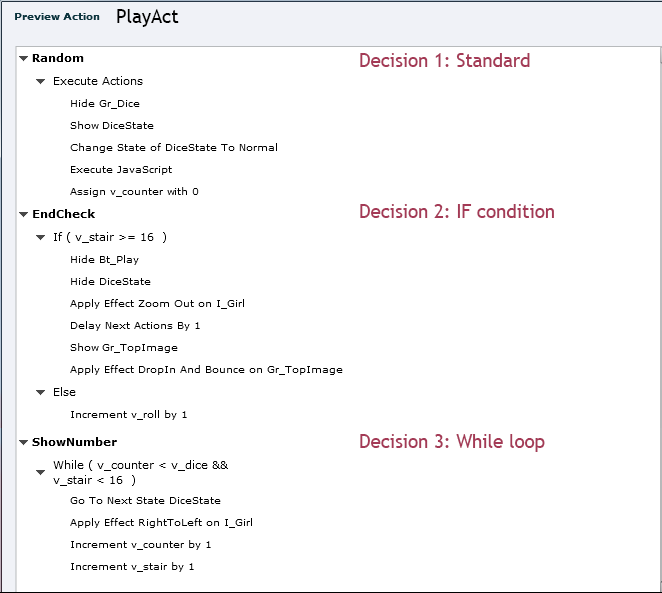 With this sequence, the 3D dice (animated On Enter) will be hidden and replaced by the static dice in its Normal state.
The one line JavaScript will generate a random number between 1 and 6
window.cpAPIInterface.setVariableValue("v_dice",Math.floor(Math.random()*(7-1))+1);
I explained the construction of this line in detail in this blog post

The variable v_counter is reset to 0. It is important that this is done before the While loop in the third decision.

This decision checks if the character has reached the top by comparing the user variable v_stair with the total number of steps (16). Contrary to v_counter, v_stair is only reset to 0 when re-entering the Game slide (using ResetAct).

The Play button is hidden (to avoid disturbing the rest of the sequence) and the static multistate dice.

The original character disappears, is replaced by a group (character + click box + text balloon) with some default effects.

If the condition is not fulfilled (ELSE), which means the top has not yet been reached, the variable v_roll is incremented by 1.

The condition used to limit the execution of the commands in this loop, is a combination of these two (AND):

The commands to be done while that AND combination results in True are:

EnterGame triggered by the On Enter event

Here is the Preview, let me know if you need more details 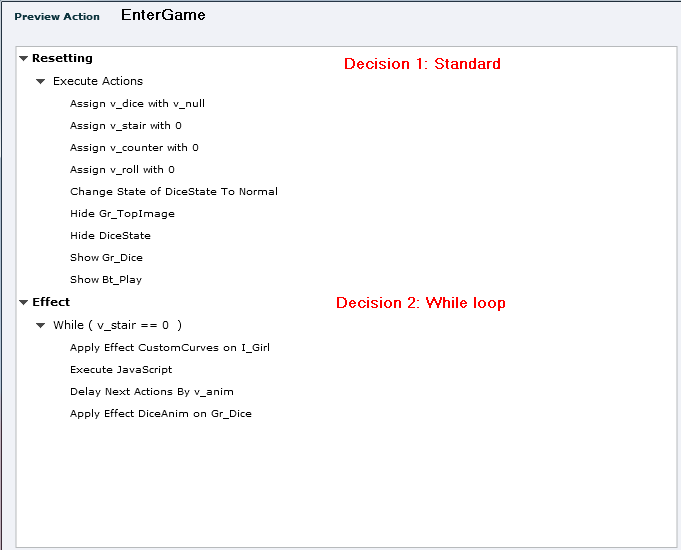 Fire away. Creating this game was a lot of fun, 'while' exploring 'while' loops. Let your creative juices surge!

﻿﻿I published a new version of the table with system variables for CP2019. It is still free to download and personal use. Check out:

Captivate 9, 2017  users: there is no change about system variables in both versions, you can download the same table.

The post 'System variables in Captivate 6' has been very popular, probably because it offers more details than what can be found in the documentation of Captivate itself. Later on I mentioned some new variables in Captivate 7 in the post New Features in 7.0.1.
Time to upgrade the table for Captivate 8, you can download (for free) the pdf from here. The document is encrypted to discourage abuse. You will be able to print it at low resolution (150dpi) and it can be read by a screen reader.

The table was first proposed at the Adobe Learning Summit presentation about Advanced and Shared Actions.