Copy/paste appearance is a new feature in the most recent release 11.5.0.476 of Captivate. Many call it a Format Painter like in MS Word, but I do not agree with that statement at all. I have sort of a ‘dual’ feeling about this added feature , Even the simple Format painter in Word can be a ‘two-edged sword'.  Same for Appearance transfer in Captivate: It can be used in a wise way or make your life as developer become a nightmarel.

Do I use the Format Painter in Word? Sure, when I have to write a quick short document, which I’m sure I will never have to edit later on. Even in that case I mostly use it for paragraph formatting, seldom for text formatting. When creating courses in Word  (which happened if they were mostly text-based switched to Framemaker when I could get a license in college, because it handles graphics and other assets lot better) I would NEVER use the format painter. Even Word has Styles for a professional workflow. Captivate is style-based as well, in the sense of Framemaker and InDesign.  Object styles are part of the theme you are using in a course, and I have published several posts about themes.

In this post I will try to explain which situations are suited for using appearance duplication. It is not possible for all object types, as you will discover, and has a hidden gem which you may not have discovered (yet). Let me know if my guess is wrong.

Not all object types can be used for duplication of its appearance to another. I checked them out and list up those who do have the options 'Copy Appearance' in their right-click menu.

First requirement is that the object type had an object style. This means that images, audio, video, bitmap image as button, SVG used as button do not have the feature. Check the Object Style Manager. That is also the right place to detect the included features in a style. Example:  Transition (Fade in/out with its duration) is part of the object style. When using the Appearance feature it will be transferred as well. The supported objects for appearance pasting are a minority. You cannot use it for Highlight box, zoom object, rollover items although they have an object style. Only text containers:

After using the Copy/paste featuure 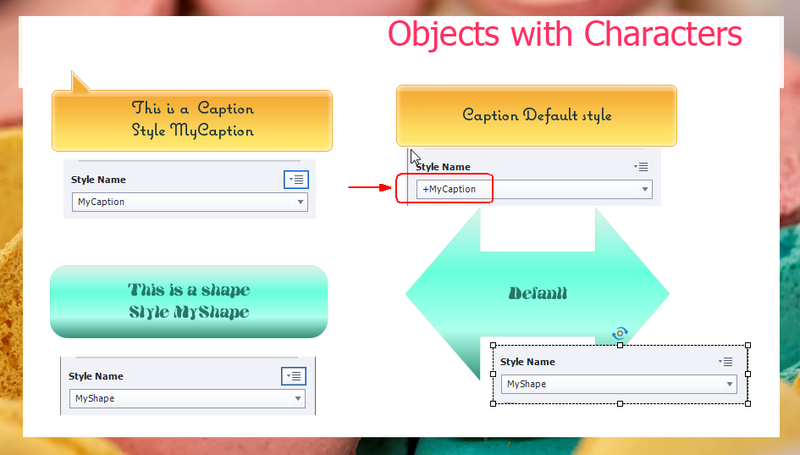 Look at the style names. For the shape the style has been taken over on the second shape, which is great!. However the style of the left caption has been applied but shows a + sign to indicate an overridden style.  I have tried this for quite a lot of captions, it seems to be always the case  and that is bad news! When later on you want to change something in the applied style (here MyCaption), that change would not be applied to the right caption shown  in the screenshots. Hence my

If you use Copy/paste appearance on text captions, and you have decided on the final look you will need to double-check the styles and avoid all overridden styles. If you forget to do so, the slightest edit you’ll have to apply in the future to that style will become a nightmare.

Text Entry Box, Text Button, Transparent Button, Image button have object styles but you cannot use the Copy/Paste Appearance for those objects, you need to apply object styles. A click box is invisible, so it doesn’t have an object style.

The only interactive object to accept Appearance duplication is the Shape button, my favorite Captivate object! Its object style includes the look of the Inbuilt Styles Normal, Rollover and Down (not Visited).  What is the result of a Copy/paste Appearance. Here are two shape buttons, and their Object States panels. The left button has a custom style MyShapeButton, the right button uses the Default Smart Shape Style of this theme:

Both buttons have the 4th InBuilt state - Visited - added. Its default look starts as the Normal state but I edited the style. After copy/paste appearance from the left to the right button, you expect to see this:

The good news is that the second button has now also the style MyShapeButton applied to it, same as for a non-button shape. Have a look at the new Object State panel of the right button:

As expected, the Visited state didn’t take on the look of the original MyShapeButton style, except …. for the font and its size! This observation leads me to the related:

Captivate has no individual Text Styles (no Character styles, no Paragraph styles), they are included in the object styles of the text containers (like shapes and captions, text entry boxes). Up till now I used Copy/Paste appearance to transfer styles between objects from the same type: caption to caption, shape to shape, shape button to shape button. However it is possible to copy/paste the text style between objects who are not the same type. That may not  seem unexpected between shape and shape button, but it IS ALSO possible between Caption and Shape or Shape button!

If the shape is a shape button, the text style will appear in all the InBuilt states.

Of course the name of the styles will not be transferred, since a text style has non name. The style will show a +, which means it is overridden. If you decide to keep the text change in the shape, please create a new style.

This new feature can be useful, but should never replace Object styles.  I would use it when being in “Draft” mode at the start of a project, when  discussing with the client about style choices. Certainly the easy way to transfer text styles is appealing to me, if followed by creation of an object style. But due to the fact that you can never be sure object styles will not be overridden (as is the case for captions) there is no way to create the custom theme before double-checking all styles. I start each project with a custom theme, because it can save so many hours of work in the future. The changes for themes in this new update are also very welcome, but that will be in another article.

Copy/paste appearance can be very useful when creating multistate objects to transfer the style of the normal state to other states. Think about a shape button, where the font style of the label is not always transferred to the other InBuilt states.