That interaction is meant in the first place to show the learner the exact time he spent on a course. In that situation the interaction is often timed for the rest of the project. However it can be used in other situations. This blog is due to a user request on the Adobe forums, have a look at this link. Summarized: the course should be exited automatically when a slide is displayed longer than a certain time, because it means that the learner probably disappeared without closing the course. That caused issues due to the LMS when retaking a new session for that course.

I used one of my previous projects to show the result of the proposed workflow. In this case the course will be exited on each slide if it is displayed for more than 3 minutes. Of course it is perfectly possible to edit that duration, or even have a different duration for each slide as you'll see in the described setup workflow. Try to be patient on at least one slide to let the 3 minutes elapse and see the course automatic exit. You can open this course in a scalable version using this link, or you can watch the embedded non-scalable one below.

When you insert a Timer interaction, you'll have to define the properties in this dialog box:

You need to define the amount of time (here 3 minutes 0 seconds) for the timer, and whether you want to count down or up. In a normal situation you can have a message popping up after the end of the counting, but in this case it was not needed. I marked three fields in this screenshot:

Even after closing the dialog box, you can always reopen it using the pencil icon in its Properties panel: 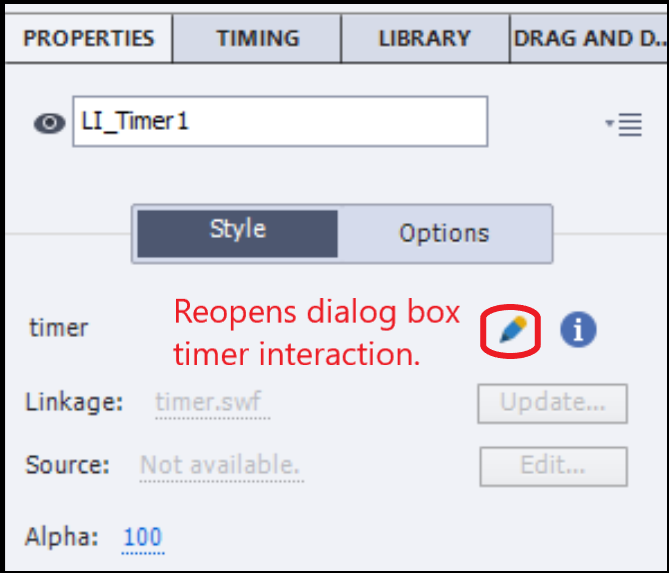 Variable: Although each slide will have an instance of the Timer Interaction, the created user variable v_timer (see screenshot under Basics) can be used for all instances. The value will automatically be reset to 0 on a slide with a new instance of the interaction. It will be toggled to 1 only when the Timeout occurs on a slide, and then the course will exit. Variables do not keep their value when closing a session.

Timing Interaction instances: insert an interaction on the first slide where you want to enable the timeout, and resize it and set up the properties as indicated in the screenshot under Basics. Since its visibility is not wanted, there are two ways to make this possible. Remember that the background already has been made transparent (see screenshot of the dialog box):

You can copy/paste the interaction to the other slides without any problem. All fields  will be the same. Only two possible exceptions which can need editing: the text color field (if using the first method above) and the time duration if you don't like to have the same timeout settings for each slide.

Dummy slide: in this case I used a very short slide at the beginning of the project, duration = 0.1second. It is not really necessary to use such a slide, you can choose any slide of the project. These are the reasons for my choice:

The On Enter event of the Dummy slide triggers this advanced action: 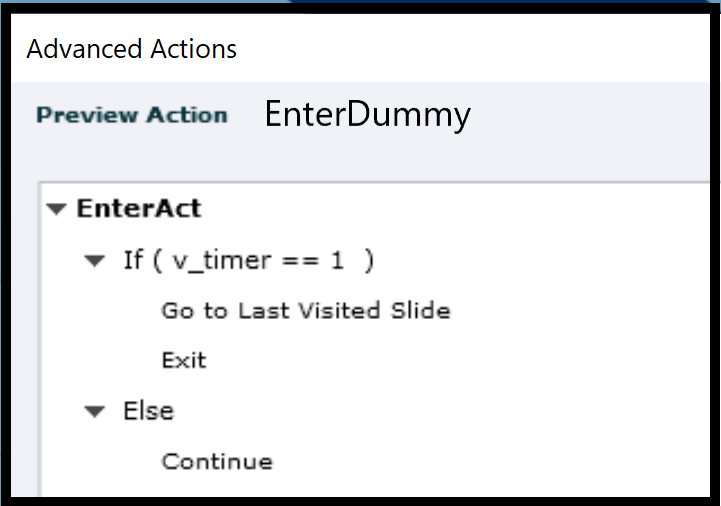 Since this is the first slide, it has to continue to the next slide on first visit. That is the reason for the conditional action, because on first visit the timer variable v_timer will have its default value (0). Only when the slide is visited from another slide where timeout has occurred, that variable will be set to 1.

User insisted on a workflow that was easily to be reproduced in multiple projects, both responsive and non-responsive.

For another non-responsive project:

For a fluid boxes project: