One of the reasons I started using eLearning assets as professor in a university college, was to offer students a more personalized learning experience. In this blog I will not expand on that goal, but show how you can use an ignored feature of advanced actions in combination with multistate objects to offer the choice or a personal avatar.

Do you know that several simple actions (dropdown list in the Actions tab for a slide or an interactive object) also appear as possible commands in advanced action, but that they are ‘enhanced’? Typical examples are:

Have a look at this example. You can use the Table of Content (custom button) to navigate freely. This project has:

Lot of multistate objects were used in the project:

The four buttons with the avatars are SVGs used as buttons. The InBuilt states Rollover and Down were deleted, but a custom state labeled 'Chosen' was added to show the selected avatar by adding a white-stroked border (shape) to the original avatar image.

The images SV_Candidate (Flashlight), and People (CareerSteps) have 4 states. The Normal state shows by default the first male avatar. This screenshot shows the states for SV_Candidate, the one for People is similar. They use the same names for the states.

The image KCMessage (KnowledgeCheck) has 5 states, the Normal state being an empty shape (Alpha and Stroke both set to 0). It is just an alternative, because that message needs to be hidden with the On Enter action of this slide. Reason: the message should pop up only after clicking the Submit button. Same names are used for the states, but M1 is new since it is no longer the Normal state:

Those advanced actions are triggered by the Success event of the the buttons on slide AvatarChoice. Here is an example screenshot for the button SVB_W1, the action W1Act: 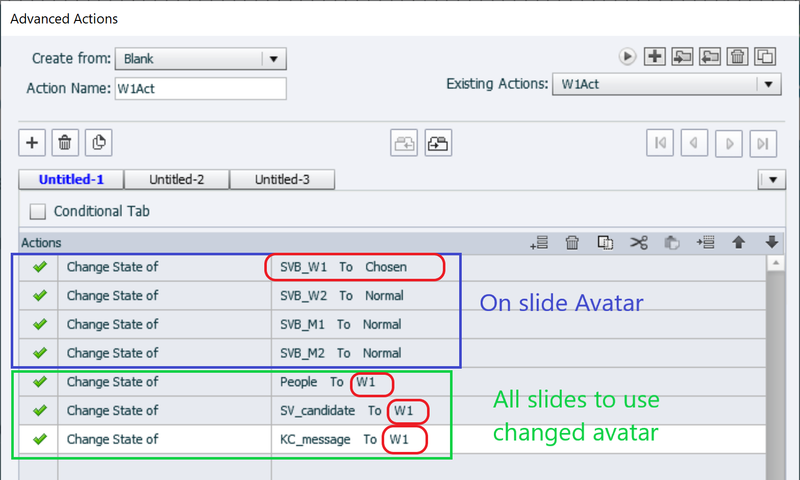 The four first commands, changing states, take care of the buttons on the slide itself. Only the clicked button will switch to the second state 'Chosen'.  You can easily adapt those commands for more or less buttons on that slide, in this case there were 4 buttons.

The three later commands switch the multistate objects on the other slides to the appropriate state.  Add similar commands if you have more than 3 slides to propagate the choice.

Beware: it is important to check the option 'Retain state on slide revisit' for the multistate objects on the three slides where the chosen avatar has to be solidified. If you don't do that, the choice will be visible only on the first visit of that slide, not on later visits. 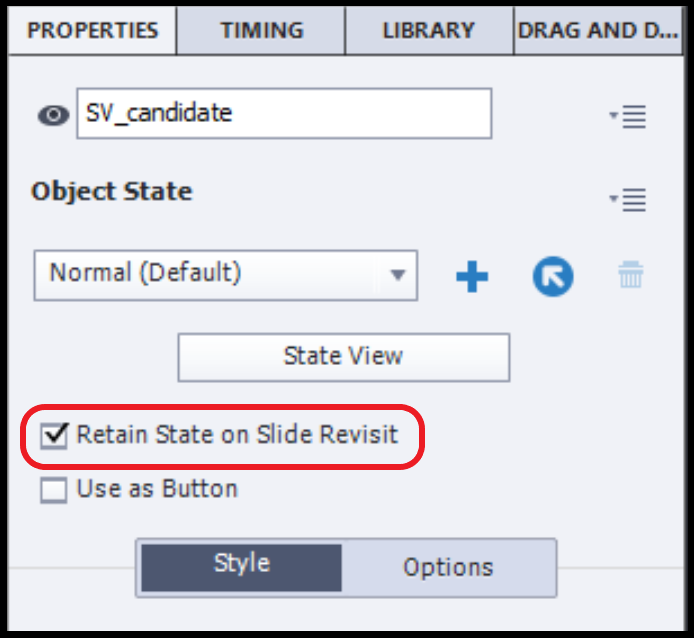 The On Enter slide event is used to hide the multistate object 'KC_Message'.

For the setup of the actions on the slide, refer to this screenshot:

It is of course possible to have different feedback messages, by using conditional actions, but that was not the goal of this blog post.

You cannot have any multistate object in a default feedback message (Failure, Success) on a question/knowledge check slide. That is why you need to create a custom solution.