I really do like the new feature in the eLearning Suite 2 that allows you to edit the source file in Photoshop from Captivate. In Captivate 4 you had already the possibility to import a layered Photoshop file, indicate which layers you wanted to use. But after import each layer was converted to a PNG-image. If you wanted to change an image, you did have roundtripping to Photoshop and it worked fine. But if you had to change multiple images, that were all imported from the same Photoshop file, you had to repeat this 'trip' for each of those images separately.

In Captivate 5 you can edit all layers at once using the 'Edit Source PSD file'. If you never used this possibility I created a small demonstration to show the workflow. In one of the Photoshop-files I created with reusable objects I have two buttons, using five layers as you can see in this screenshot. When imported in Captivate, as you'll see in the demonstration I can create each of the buttons using three images: an Text image (Nee or Ja), a background color (RoodNee or BlauwJa) and the Overlay (which I use for both buttons). Both text and background color have to be changed.

Similarly I created Photoshop files with all kind of arrows, with text balloons etc. The idea is to be able to reuse those items, and when necessary to change quickly the color by using the roundtripping feature I described in the demo. 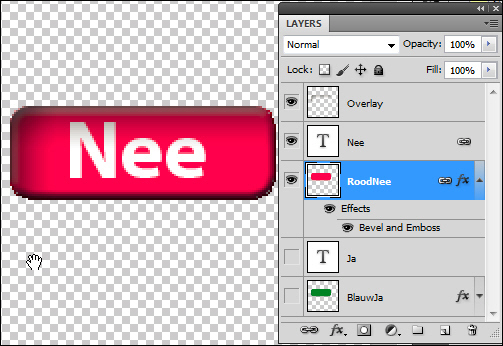