This second tip is closely related to the first tip about labeling. If you have read that post you'll have seen that good labeling could facilitate filtering for dropdown lists, using this screenshot. It shows the Parameters dialog box (Shared Actions) where filtering is used to limit the choices in a dropdown list. 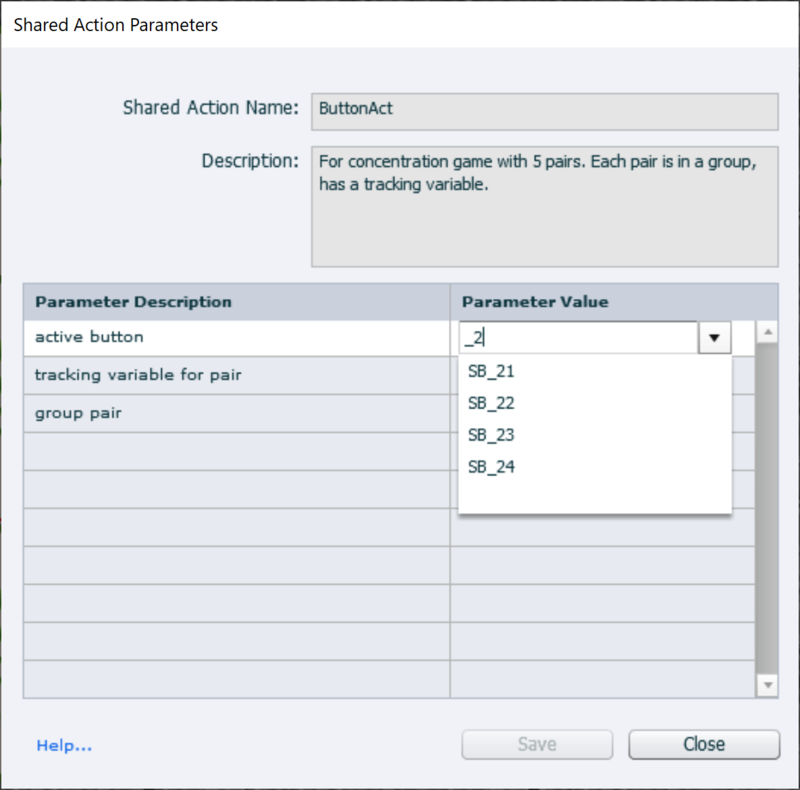 Time to explain what I mean by the term 'Filtering'. Dropdown lists are all over Captivate's UI, not only in the Advanced/Shared actions domain. Some of those lists are sorted alphabetically, some are sorted chronologically (very annoying: most recent added item appears on top). They may show all items, but can have an automatic filter of items. That is the case within the Advanced Actions dialog box: when setting up a condition or a While loop, if you need to choose a variable, you'll only see variables in the dropdown list, for operators you only  operators. However, even when filtered and sorted alphabetically the lists can be very long and it takes time to find the proper item. Being able to reduce a list by manual filtering based on the names is a big timesaver! I remember older versions where searching was reduced to typing the first character, to scroll to the items starting with that character. That used to be the case for the variable dropdown list, reason why I started labeling user variables with v_ as first character, to differentiate from the system variables which started either with 'rd' or 'cp' (the first types disappeared from the lists).

It consists in typing a sequence of characters, resulting in displaying only items which have that sequence in their name. It doesn't matter where that sequence appears: at the start, at the end, in the middle. There is no case sensitivity, which is rather exceptional. Although names cannot start with a number, if you include a number in the name it will be very easy to use the number as part of the filter sequence. This will become easier to understand with some examples:

The dropdown list for those commands in advanced actions will show all objects on all slides, leading to a very long dropdown list. Using a filter and proper labels is very useful as you can see comparing these two screenshots of such an action before and after applying a filter. In this case the filter shows all groups, which are labeled as Gr_xxx

Although many dropdown lists are already filtered on the type of item needed, look at this example. You need to know that in the field here you need to click twice to be able to type in a filter: first click selects the field,  second click gets it in Edit mode (like with a text container). I added the Properties panel, because the label of the active button is used as reference for the 'active' button. Same example was shown at the start of this blog.

As you have seen the filters are available for all dropdown lists in:

Too bad that it is not available for other dropdown lists:

It will compare the use of  Grouping (when using Show/Hide workflows) and multistate objects for similar goals.