In a previous article I described the workflow to edit a Character (from Media) with Photoshop, without damaging the original image. In this interactive video you’ll see the workflow: an inserted character from the Illustrated category will change colors and be flipped. This very simple workflow is suited only for regions with solid colors. The next interactive video will show the workflow to change a color in a photographic image.

If you prefer watching a rescalable project on any device, use this link: CharacterEditPhotoshop
I used Photoshop CC2019 as editor, but the workflow is pretty much the same in older versions.

As you probably know, the downloaded characters are stored (for Windows) in Public Documents, under AdobeeLearning Assets. If you have multiple versions of Captivate, you’ll find a subfolder ‘Characters xx’ for each of the versions. Because of that location you are able to edit the characters even without Administrator rights.

For each character in the folder you’ll have a Thumbnails and an Images subfolder. The Thumbnails show all what is available for that character, the Images only the downloaded image, both in a High and a Low version.  Although you can always choose for 3 ways of inserting a character: Full, Half and CloseUp, there is only one image in Low and High version, real images for those who were downloaded, placeholders for the others.

When you insert a character in a Captivate project, it will appear on the stage and in the Library. The file showing up in the Library can be one of the 6 possible versions: High/Low in CloseUp, Half or Full version.

You can edit the Character  on the stage with the set of editing possibilities provided by Captivate: 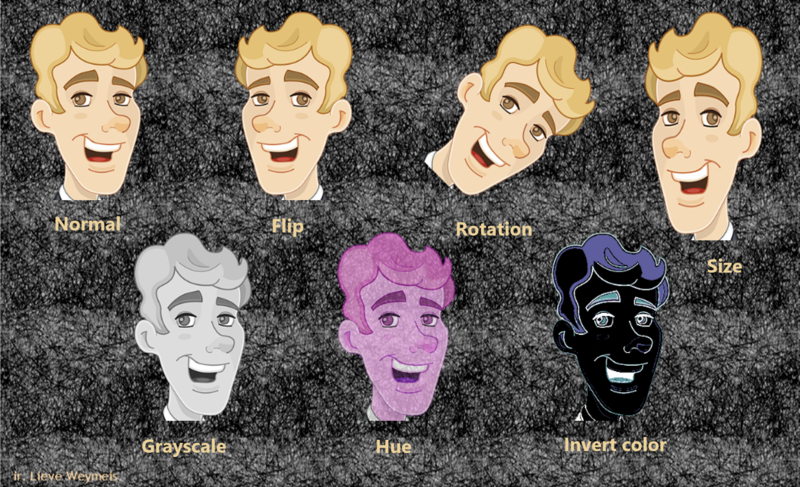 This workflow will not change the original image in the Library. However if you need to use the same edited image multiple times, you’ll have to use the copy/paste workflow. The editing is not saved in the Library.

Eidting on the stage will keep the original image save. If you want to reuse the edited image multiple times in your course it can be a good idea to use the ‘Edit with….’ option on the image in the Library. You have to be careful not to change the original image as it is stored on your system.

If you save it that way that particular instance of the image will be changed also for future project. Bit confusing, but the other 5 instances remain untouched. In this example I edited the Low, Half version of Sarah01 (Illustrated category). As you can see in this screenshot, the other instances keep their original look, although you’ll find only one image for Low on your system. 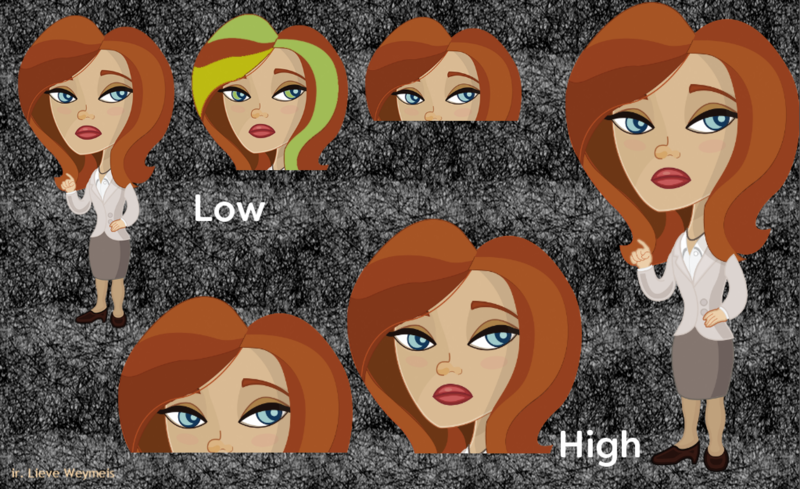 What is the correct way to preserve the original image? You have to duplicate the image in the Library and edit the duplicate. You can see the result on this screenshot for the Sticky Woman, low resolution, Half instance: 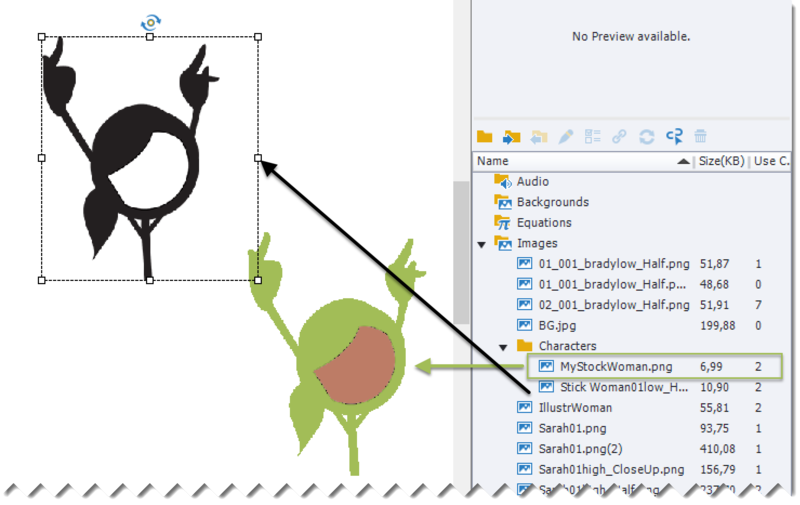 Roundtripping in Photoshop with the duplicate image is not happening the first time as you are used to for normal images. It will get a generic name in PS, and you’ll have to export it to a PNG file, to a wanted location after the first editing. Later on roundtripping will happen in the usual way. I will show the workflow step-by-step in a future interactive video.

If I need multiple edited characters in a course, to be reused over and over again I would prefer to create a layered Photoshop file and use the Import functionality. You did see that I created an extra folder for Characters under the Images folder in the Library in the last screenshot. With an Imported PS file that would be unnecessary.  Do not forget that it is always possible to use edited characters in the Library in any other project, by using the External Library workflow.

Watch this interactive video to see how you can realize the simple edits I showed in the screenshots in this blog.   You ‘ll also get an interactive video explaining the creation and use of an imported Photoshop source file. This post was meant as an introduction.