More than 7 years ago I wrote a similar blog post: how can you check the sequence of clicks. Of course the embedded tutorial was a SWF, since only that type of output was supported at that moment. This post is an update with HTML5 output, and taking advantage of new features (multistate objects, SVGs as buttons).

Play with this example project. I inserted two examples of sequence checks:

First and last slide are taken from the Quick Start Project 'Aspire'. The images used as button also are from the Assets panel.

You probably will have more ideas where this workflow can be used for Knowledge Check slides. There is a sequence type of quiz slide, you can test a sequence with Drag&Drop slides, but these alternatives are less limited in design. ould love to hear your proposals for sequence checks as well

Similar to the old post I used only two user variables (to be created):

Instead of the hide/show workflow used in the original post, multi-state objects to display the feedback are used. That object is labeled Tx_Display (for the Geo-slide) and Tx_DisplayBis (for the Keypad slide). Look at the screenshot of the Object state panel for Tx_Display: 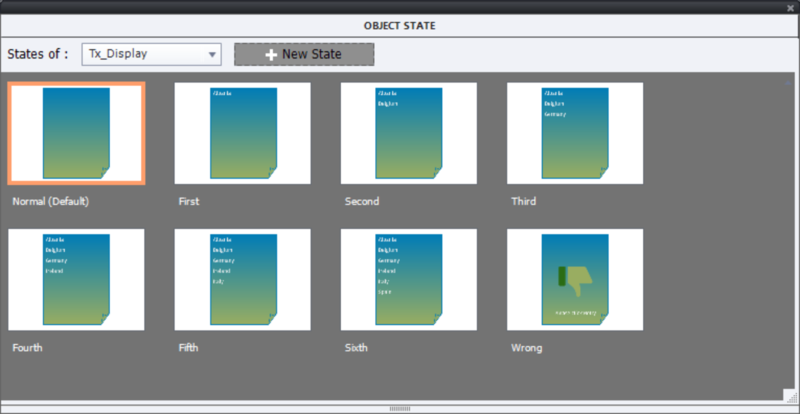 The Normal state is empty (easy to reset, will automatically reset when returning to the slide if ‘Retain State’ is unchecked). The 6 following states correspond with the correct sequence, hence their labeling. The last state is the Wrong state. The sequence of states is important, because I will be using the ‘Go to Next State’ command in the actions.

If you did read some recent posts, you know that I am a big fan of the use of SVGs both for image and interactive objects. In this case I used them mostly because they remain crisp at any resolution and lead to very small file size. The file size of the published project is less than 4MB. ¨Probably half of that size is due to the bitmap images on the ready-to-go slides, and the unique PNG which I used for the Background of the Keypad. Look at the timelines of the sequence slides. SVGs are grouped. Too bad that you cannot recognize the interactive object from the color (should be green), but they all have a pausing point set at 1.5secs (Europe SVG is not a button).

The group Gr_Wrong on the Keypad groups all button SVGS which are not used in the pincode. Those buttons are on top of the image, and can be hidden, since the remaining keypad image shows them as well but in a non-interactive version. For the Geo slide, the colored country  SVG buttons are also on top of a big SVG (Europe), but I don’t want the colored ones to disappear, for that reason the buttons will be disabled, not hidden (see advanced actions below).

The colored country SVG buttons trigger an advanced action On Success. There are 6 countries, which means 6 advanced actions (created with the duplicate function). The five first actions are similar to this SV1_Act: 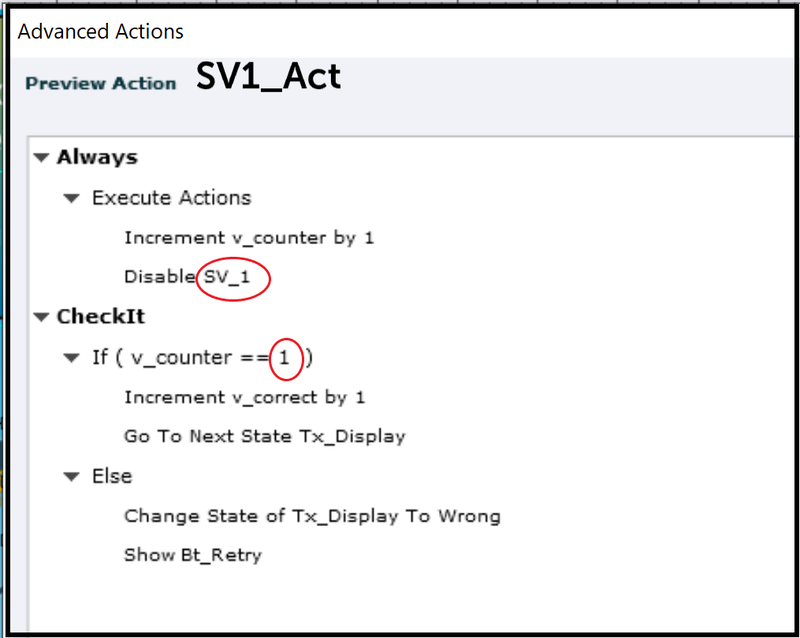 Only the items marked by a red oval have to be switched for the actions SV2….SV5Act: the name of the SVG button in the first decision, and the literal (number) in the second decision. If the clicked country is not fitting in the correct sequence, the learner sees the Wrong state in the multistate shape and the Retry button will appear.

The last country SVG button (SV6) has a slightly different action, derived from the previous one.  Reason: the Next button has to appear if the sequence is correct. That extra command is highlighted by a blue rectangle. 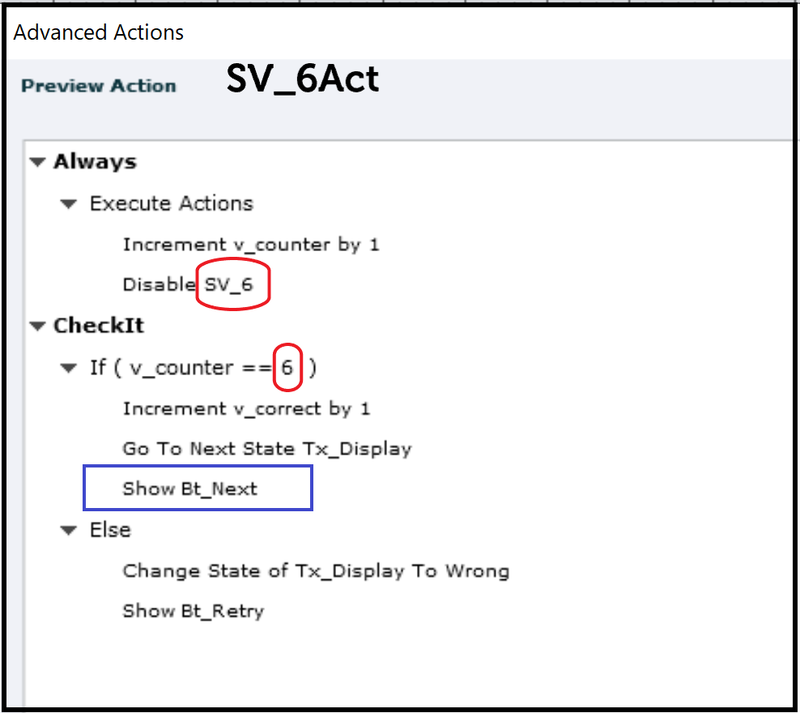 The Next button has the default command ‘Go to Next Slide’ on its Success event.

The Retry button needs to  everything, as you can see in this screenshot. Action is triggered by the Success event: 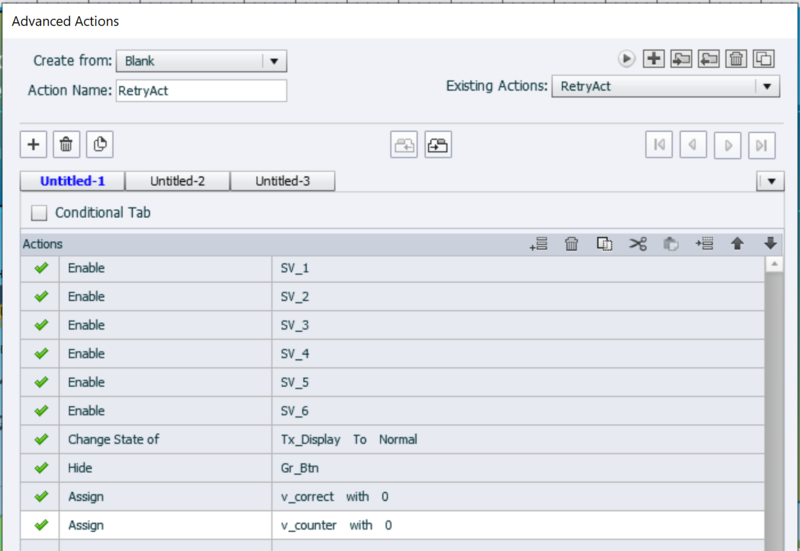 Because of the re-use of the variables v_counter, v_correct and the button Bt_Next which is timed for the rest of the project, the On Enter event of this slide is used to reset everything to default values. If you want to allow going back to slides, a similar action would be needed for the Geo slide, but that was not the case in the example file. The On Enter action is pretty simple: 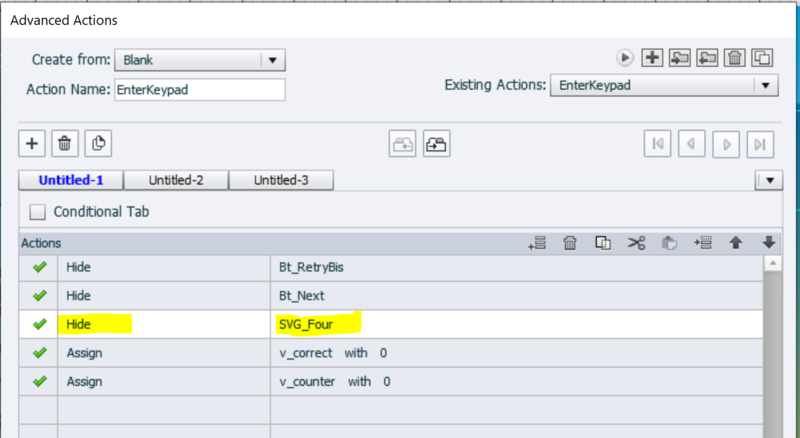 Some explanation may be needed for the Hide command which I highlighted. Since the required pincode (29791) needs the number ‘9’ twice (second and fourth position in the sequence) I have put two SVGs on top of each other: SVG_Two and SVG_Four. By default SVG_Two is visible, but SVG_Four  is hidden and becomes visible With the same action where SVG_Two is hidden. You cannot have two interactive objects on top of each other when both are active at the same location.

The Number buttons trigger an advanced action On Success.  It is similar to the one in the Geo slide, except for using Hiding instead of disabling. Example of the first number button (which is 2): 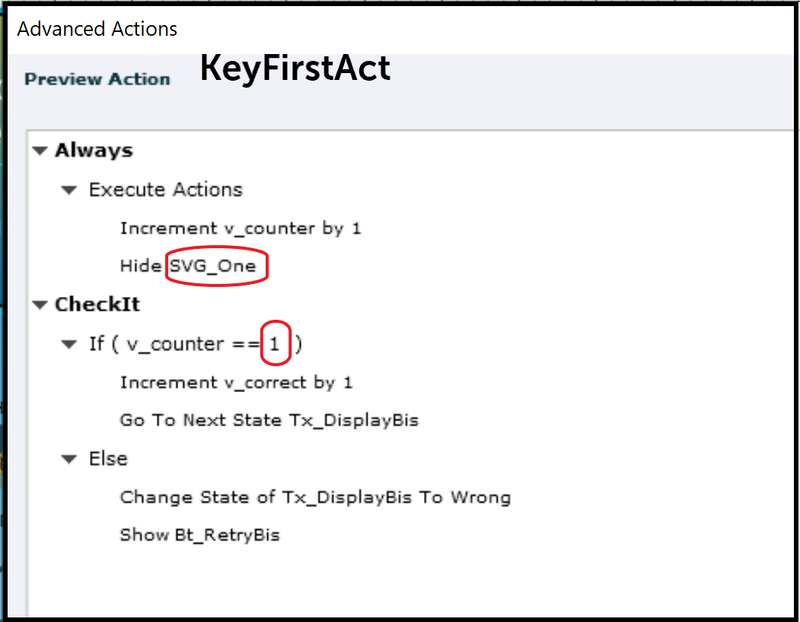 As explained above, for SVG_Second (number 9) is bit different 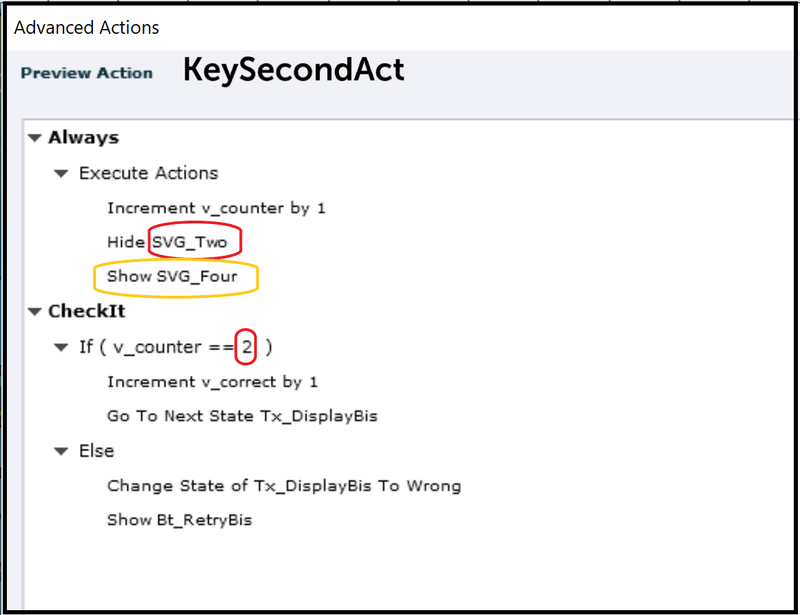 Similar to the Geo slide, the last correct button (number 1) will show the Next button if all was correct: 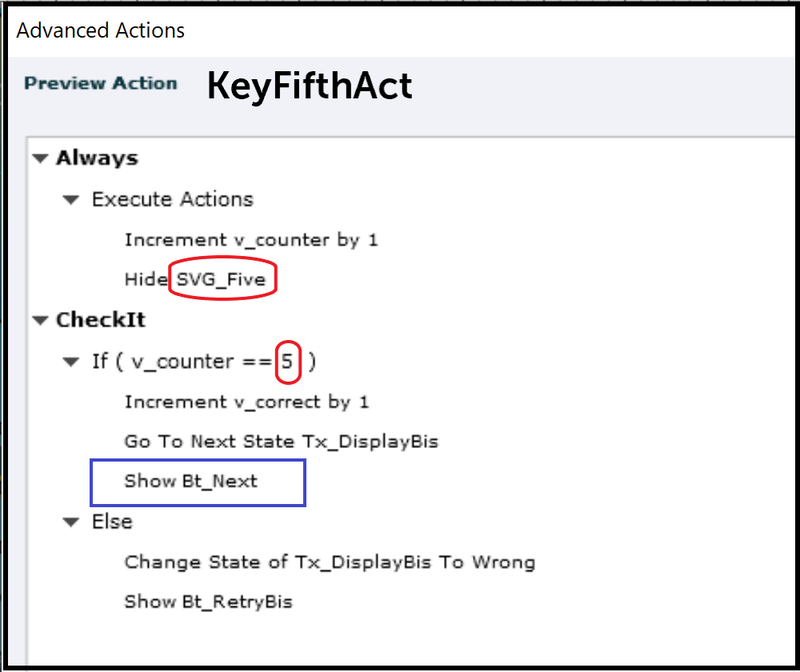 Any wrong number button will trigger this action using its Success event:

The new Retry button, labeled RetryBis is similar to the one on the Geo slide, triggers: 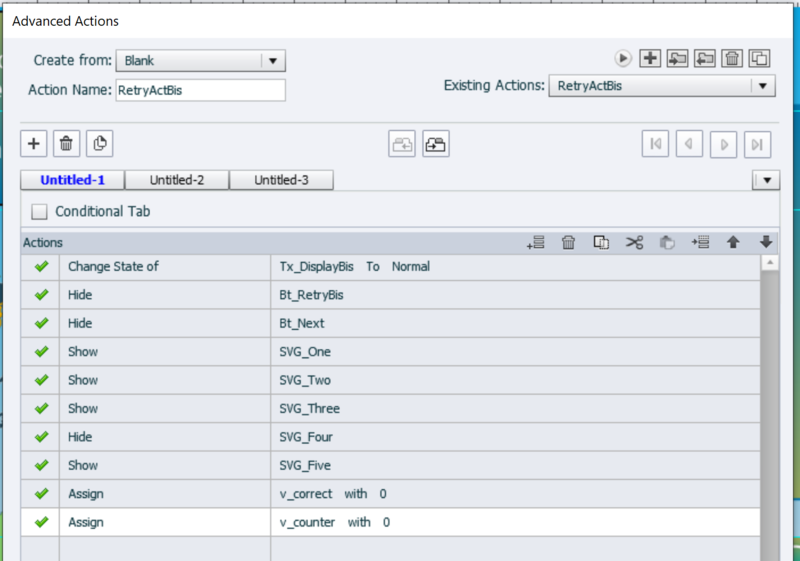 Remember that the SVG button Four  is in the same location as Two, because both have the number 9. That is why SVG_Four has to be hidden and SVG_Two shown.

Why no Shared Actions?

Although we have very similar actions for the SVG buttons, both on the Geo slide and on the Keypad slide, this is a typical use case where it is impossible to use shared actions. Problem are the ‘literals’, which should have been converted to parameters. Look at the screenshot of the action SV1_Act posted earlier. Logically these items should be parameters:

Second reason: with the workaround the parameters would increase to 6, which is my limit for a usable Shared action. Whereas using duplicate functionality for the advanced action is lot quicker, since only two items need to be edited.

This blog is already way too long. If you like to hear about my ‘thumb rules’ for choosing between duplicate advanced and shared actions, post a comment. Maybe I’ll dedicate another blog to it.