In a recent thread user asked how to prevent that a learner would click the Submit button on a Drag&Drop slide before having performed at least one drag action. Sort of alternative for preventing ‘Skip’ on a normal quiz slide. Such functionality is not available out of the box.  The D&D slide needed to be scored, which made the situation more complicated (easy reset by developer is only possible for Knowledge Check slides).

Like all quiz buttons, the Submit button on a D&D slide is an embedded objects. Consequence: it doesn’t have an individual timeline nor an ID. There is no way to disable that button. You can drag it out to the scratch area, and use Auto Submit, but that was of course no solution for this situation.

Have a look at this published file.  As usual I used some ready-to-go-slides, in this case from the project ‘Rhapsody’.  All slides were taken from this Quick Start Project, but I deleted the existing Drag&Drop interactions,  just used the design components. After the title slide, you’ll see two Drag&Drop slides. The Submit button is not on the slide when you start, it will only appear after the first drag action.

The Submit button is not on the slide when you start, it will only appear after the first drag action.  To make the slides more similar to quiz slides, I added a second step to the Submit Process.

Check your Captivate knowledge for version 11.5. Either use this link (rescalable) or watch the embedded published file (fixed size):

The trick is to use the Timeline and a motion path effect triggered by any Object action. Not really very complicated, follow the steps below. This workflow, due to stacking of objects, is not that easy in a Fluid Boxes project, the example was a non-responsive project with Scalable HTML output.

1. Pause the timeline before the default pausing point

By default each Drag&Drop slide has a pausing point at 1.5secs, similar to question slides and linked to the Submit process. Too bad, that pausing point is not visible in the Timeline panel, you can only see and edit it in the D&D panel.

You need to pause the timeline at a frame before this pausing point  at 1.5secs by inserting an interactive object which remains invisible to the learner. In this case I inserted a click box, small size (1px for width and height) and located in a place where it is very improbable that learner will try to click. Set it to infinite attempts with the command ‘No action’ to be triggered by its Success event; do not show the Hand cursor. Have a look at this screenshot for the setup of this click box: 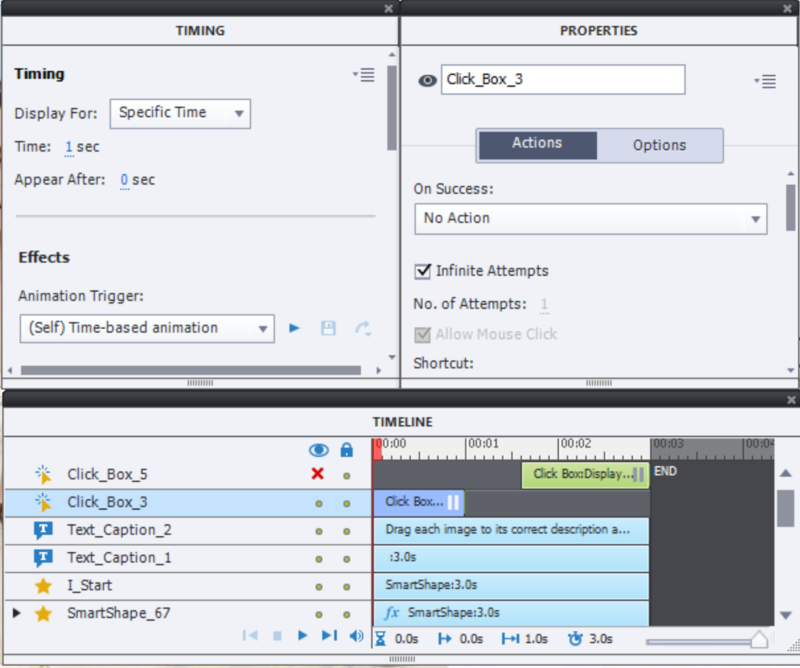 The topmost click box which appears later, will be explained the workflow for creating second step Submit process.

To make the Submit button invisible you drag it in the scratch area, either to the left (first D&D slide) or to the right (second D&D slide).

Although the Submit button is an embedded object, you can apply an effect to it using the Right-click menu or the Timing properties. The timing of the effect will not be visible in the Timeline panel, because the button has no timeline. The only way to set up the timing is with the numbers in the Timing panel. This motion effect (I used Left-to -right or the opposite one depending on the location) can be very short (used 0.2secs). It is important that it starts at or after the pausing point of the click box (step 1), and ends before the default D&D pausing point (which was kept at 1.5secs.). See this screenshot for one of the Submit buttons: 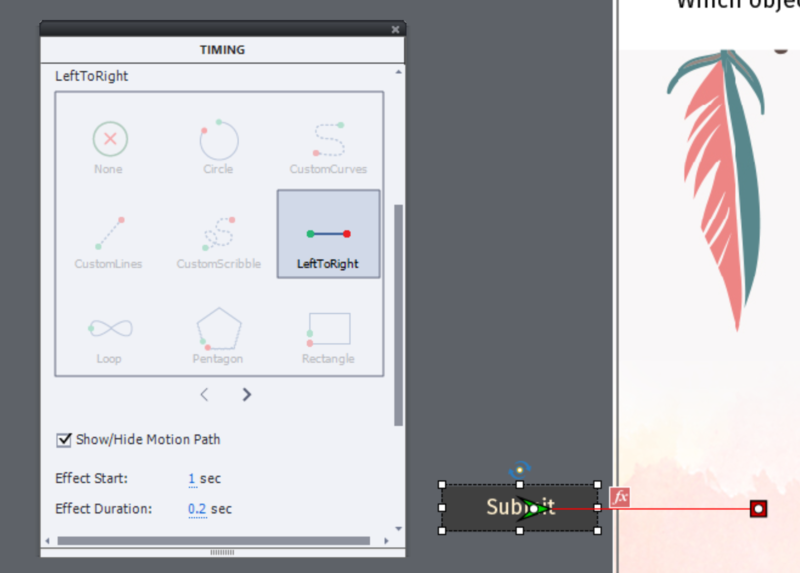 Create a Boolean variable, labeled it v_drag. Its default value should be 1. It will be toggled to  after the first drag action.

The purpose of this action is to release the playhead with the first dragging of any drag source to a target. The result will be that the Timebased effect on the Submit button will occur, and the Submit button enters the slide. The playhead will be paused by the default D&D pausing point at 1.5secs. Hence the importance of the timing of the effect described in step 3.  To avoid a same playhead release to happen on subsequent dragging, the tracking variable v_drag is toggled to 0, and the action is conditional: 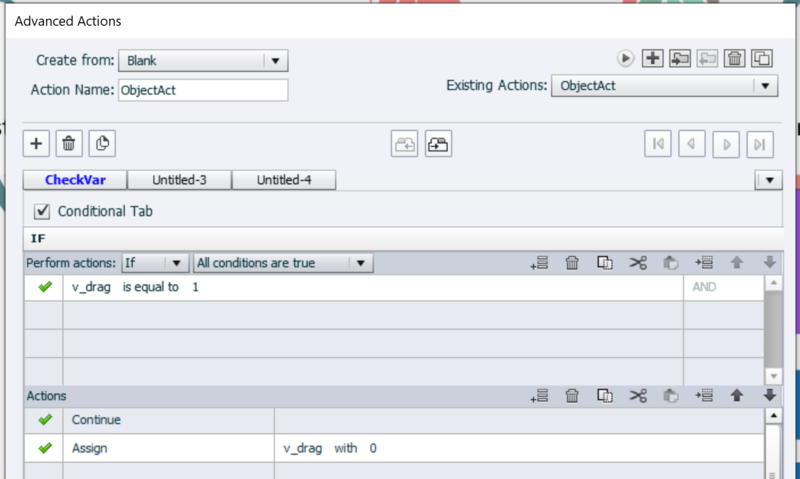 Since you don't know which will be the first drag action, you need to attach to every drag action. That  is the boring part since there is no easy way to attach the same action to all at once, not even for one drop target. Here are the steps for each drop target:

In the example file you’ll have 3*6=18 object actions in the first D&D slide, and 4*4=16 in the second slide. I really hope one day there will be a way to apply the same action to multiple object actions at once…

Do not forget to test! The actions Success and Last Attempt (wrongly labeled as Failure) were left both to the default command ‘Continue’. That way the learner will have time to watch the feedback. Timing of the feedback shapes (or captions) can be edited as you probably know.

If you veiwed the example file, there was a second step (click the slide to proceed) added. If you don’t do that, the feedback message will appear and the playhead will be released, out of control for the learner. It is a simple trick, as you may already have seen in the first screenshot of the Timeline for the first click box.

I added a second click box, covering the whole slide, but appearing after the release of the playhead by the Drag&Drop actions on Success of Last Attempt (1.5seconds). This click box triggers the default ‘Go to Next Slide’: 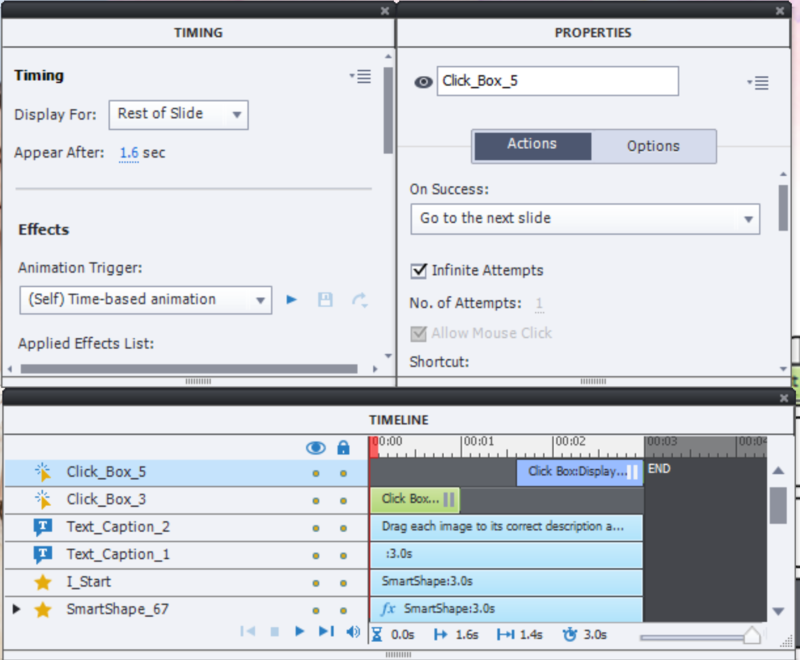 Don’t forget to warn the learner about this second step, The example file had the warning in the feedback messages.