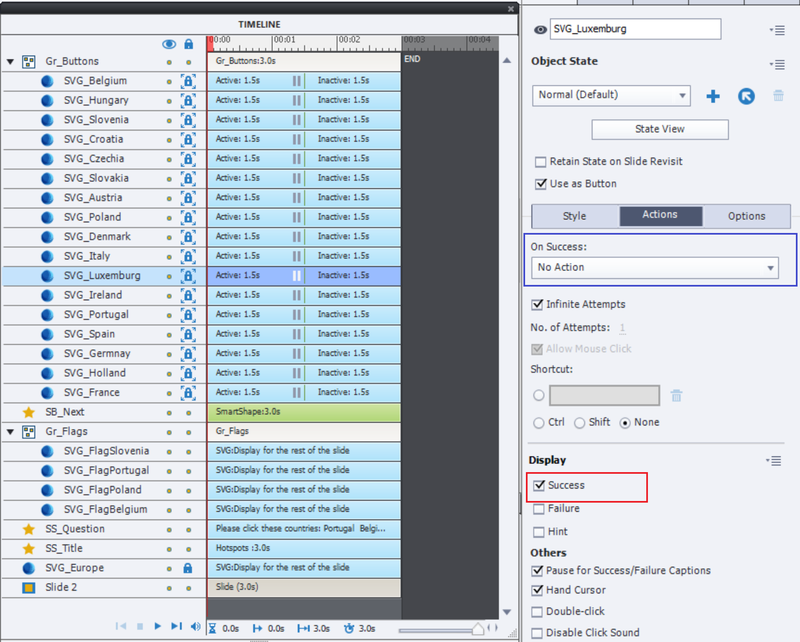 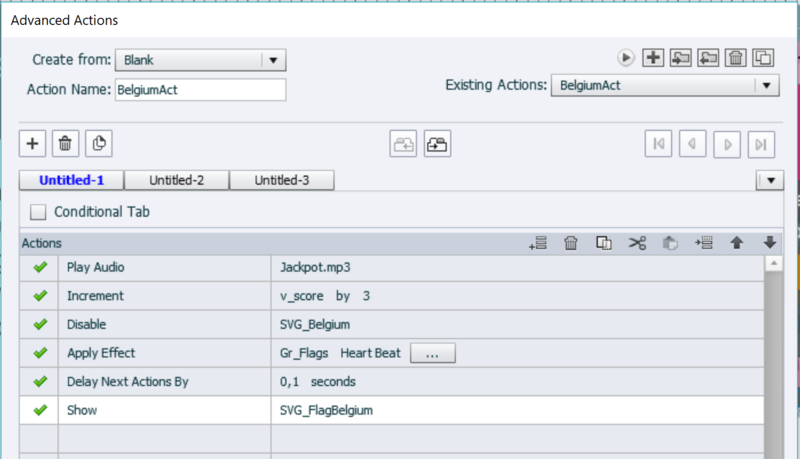 This is not the first time I publish about creating a Custom Short Answer Question. The default type in Captivate is pretty limited:  the user should enter exactly the same answer as the defined correct answer which is almost impossible with this type of question. The normal validation for such a question is to check if some keywords are present, and eventually if some other keywords have not been used. My previous posts were created with Captivate 5 for publish to SWF only:

Widgets were meant for SWF-output only, including the widget by Jim (this one, he has some widgets that are also compatible with HTML5). Since Captivate 7 the TextArea widget got a companion, the 'Scrolling Text Interaction'. Don't be confused by the name, it is essentially the same widget, but compatible with HMTL5 output.

This week I accepted another challenge from a Captivate user on the forum, concerning the use of TextArea (or Scrolling Text) with a more complicated condition than the one I described in the previous blog posts: How to verify that a variable "does not contain" a value? As you probably know, the operators in the IF part of a conditional action are bit limited: there is an operator 'contains' but no negative counterpart. My first reaction was to propose the use of JS, but my intuition told me I should also try with advanced actions. This post will explain how I solved that problem, and I was very happy when the King of Javascript in Captivate, Jim Leichliter posted his alternative with JS in the same thread, scroll down to find the script.

In this post I will explain the conditional advanced action, and also point to another well-hidden gem, only in Captivate 8: the Captivate team has now embedded the variable control in the Scrolling Text Interaction! Don't tell that they are not listening to users :) What was only possible with the extended TextArea widget by Jim in previous versions, can be done with the supplied Scrolling Text Interaction.

The description of the problem: " We are basically validating the content in the widget and showing appropriate feedback. Since the user can enter anything in the widget, we are only tracking the keywords. To be precise, we are trying to create an Advanced Action like this, where the text entry should contain the words Organizational, Behavioral, and Managerial but not the words Transformation and Non-Compliance. If the entry contains any of the "illegal" words, then incorrect feedback caption should appear."
Translated: when the answer is submitted, the conditional action should show a Positive feedback when: If those conditions are not all fulfilled, the Negative feedback should be made visible.
Because of the missing operator 'does not contain' this cannot be done with one decision, one IF combination using AND, which explains why the user was stuck.

After a long career as professor, this has become one of my mottoes: make it simple by splitting up the problem:This was possible because of the typical way Advanced actions are executed in Captivate:

This has led to a conditional advanced action with three decisions.

To make the question more universal, I didn't use literals for the words, but stored them into variables. These variables were created:

This action is triggered by the Submit button on the Short Answer slide. This was the answer to the problem presented at the beginning. I will not explain the other advanced actions like the one triggered by the Reset button or the different actions On Enter for slides to reset the situation to normal. The action has 3 decisions:


This decision checks if all the imposed words are present in the Short Answer, using the operator 'contains', with AND combination. If that is the case, the Boolean v_TA_OK will be set to 1. 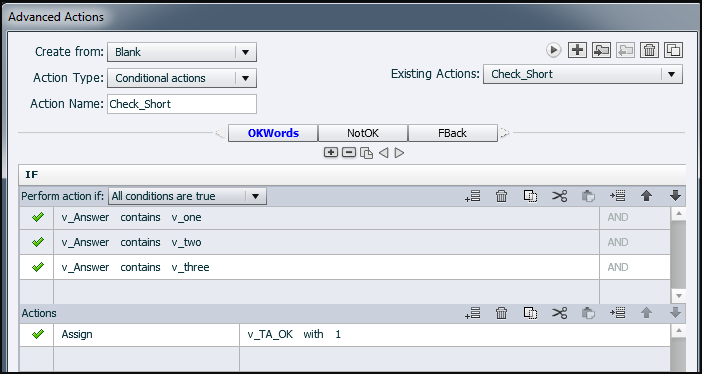 The not-allowed words are checked with this decision, using again the operator 'contains' but this time in an OR combination, because even if only one of those words is present, the negative feedback has to appear. If any of the words appears, the Boolean v_TA_OK is reset to 0. It is very important that this check only occurs after the first decision! After this second decision (in this case) all conditions have been evaluated and the Boolean variable v_TA_OK has its final value, will be used in the last decision 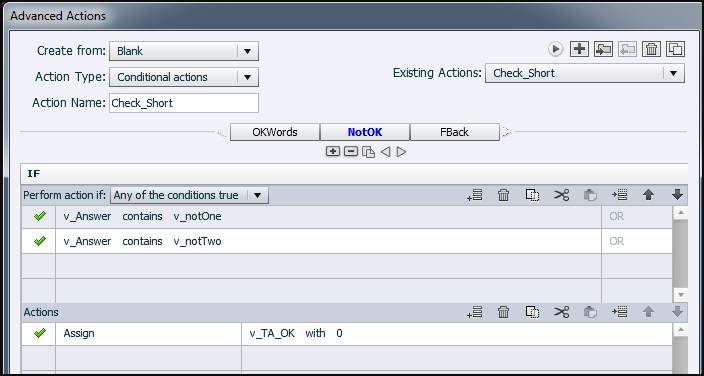 Only this last decision has also an ELSE part, as you can see in the total view of this conditional action: 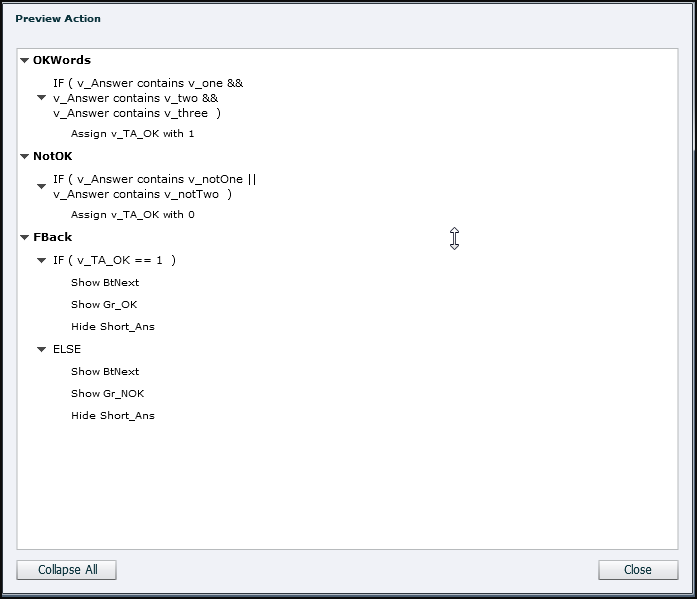 As I explained in the last slide of the movie, because of the stack order, where an Interaction always is on top even though it is not on top in the Timeline, I had to hide the Interaction to be able to show the Feedback groups, because they were in the same location. Here is the Timeline of this Short Answer slide:

You see that the Interaction (indication is Widget on timeline) is not on top. The Next button is not on this slide, but on the first slide and timed for the rest of the project. That shape button is hidden/shown when necessary.

Variables are case sensitive, and contrary to validation of a Text Entry Box it is not possible to get rid of that case sensitivity for variables associated with this interaction. If necessary you'll have to create more decisions.
I wanted to emphasize the importance of sequence by this blog post, and the fact that Captivate will always evaluate all conditions/decisions. This is not always the case in normal programming languages. Trying to explain: The new possibility in Captivate 8 to change the value of the variable associated with the Scrolling Text Interaction and have this displayed in the interaction is important if you remain on the same slide. Contrary to the extended version of Jim's TextArea widget, the rule that variables for each interaction are cleared when you leave the slide is also applying to the Scrolling Text. If you want to keep value of the variable you have to transfer it to another variable.