In some previous blogs I have warned to be careful with using the Switch to Destination Theme feature, have demonstrated an alternate but safer workflow to embed ready-to-go slides in a course with a custom theme. Because the themes in the responsive and non-responsive Quick Start Projects are not identical, I added a third post explaining the possible issues in the responsive version. That last post offers a free table with the names of all the master slides (including the most recent Alliance project).  It is an important resource if you want to avoid issues when embedding a ready-to-go slide. Issues occur when your present custom theme and the theme of the embedded slide have identically named master slides.

Only two QSP projects have audio in the Library: Rhapsody and Wired. The clips are used on the Podcast slide, triggered with the Play Audio command. As you all know, adding good Narration (VO) to an eLearning course will enhance the efficiency of that course considerably. Designers of the QSP’s have taken care of an easy replacement of graphical assets for you, but if you want to add narration or other audio to the course, you get no help.  This post will try to help you with some tips. It will not handle the creation of the audio clips, whether you use the TTS feature or a real audio recording. Only tips to avoid frustration when adding audio to the slides. Since the Closed Captioning feature of Captivate is limited to slide audio, the post will not explain how to add other types of audio. At the end you’ll find some more links which could help you in that case.

My usual workflow for inserting an audio clip as slide audio is:

In many slides, objects are timed for the Rest of the slide. Result: when the slide duration is increased to fit the audio clip, all object timelines will follow that example. However there are some exceptions, as seen in this screenshot: 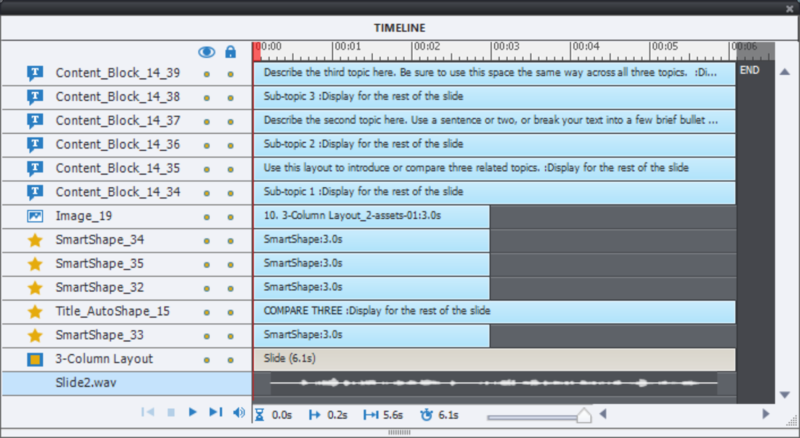 In this slide (12 from Aspire) some objects have a timeline keeping the original duration of 3secs. When playing that slide in Preview, those objects will disappear after 3 seconds.

Select those objects which are not correctly timed. This can be done by clicking their timelines in combination with CTRL (or SHIFT for sequential timelines) key. TUsing the shortcut key ‘CTRL-E’ will change their timing to ‘Rest of Slide’. You can use the Timing properties of course.

Many slides in the Aspire project have the setup as shown in this screenshot. 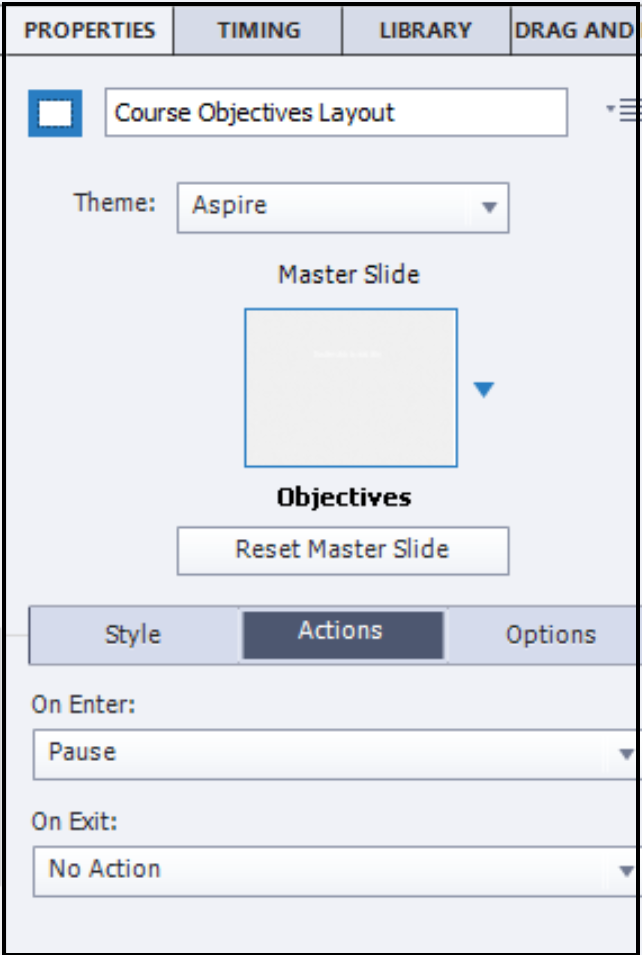 This setup will prevent the audio clip on the slide from playing because the Pause command on the first frame will pause also slide a udio.

You have to take out that pause. You can safely replace it by ‘No action’ which is the default setting both for On Enter and On Exit slide events Result will be that the slide will not be paused, but the playhead will move seamlessly to the next slide when the audio has finished. That is IMO the most logical situation. If you want to mimick a presentation, where each slide is paused at the end and needs learner intervention, you can change the On Exit action to ‘Pause’ or add a button ‘Next’ to pause the slide. However do not forget that this may not be the best practice.

Many slides in the other QSP projects have set the On Exit event to Pause, to imitate  a Powerpoint presentation.  It is a personal liking, of course, but I prefer largely to have the playhead proceed to the next slide without learner action. If you share that idea, just take out the Pause for the On Exit event.

Contrary to the Pause command (see tip 2) a pausing point will not pause slide audio, although the playhead will be paused and so will all graphics assets/effects which are running or appear later.  By default, all pausing points will be set to occur at 1.5secs, either on the slide (for Quiz slides and Drag&Drop), or after the start of the interactive object timeline.

In most cases the increase of the slide duration due to inserting an audio clip will not cause problems, when the pausing point is due to an interactive object like a button. Reason is that the button will often trigger an action jumping to another slide, or revealing some content. The frames after the pausing point (inactive part) are not important in that case.

Possible issues can occur on quiz slides, if you insert an audio clip.  Here is an example (T/F slide 23 in Alliance):

You see the pausing point on the slide timeline at 1.5secs. Some smart shapes are not timed for the rest of the project (see Tip 1). However since the slide is paused at 1.5secs, before the end of those shape timelines, you’ll not be bothered by that while the audio continues playing (not paused). However, if while testing that slide, you have to wait a long time after the Submit process, and you see the shapes disappearing, that is due to the Actions setup in Quiz Properties. They were set in this slide as shown here: 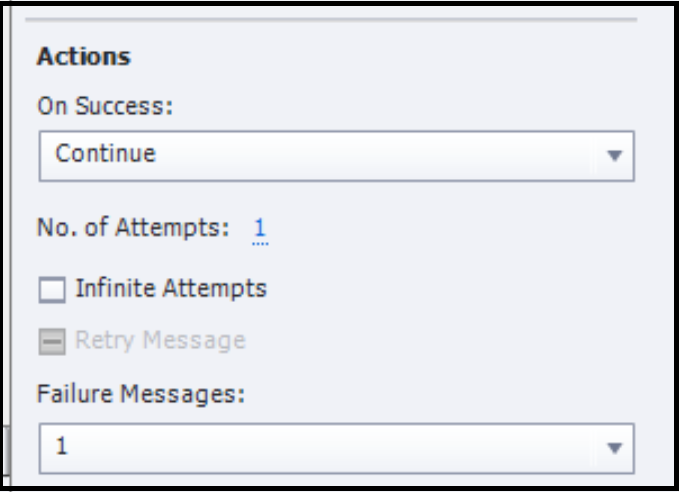 Both actions are set to ‘Continue’, which means that the playhead is released. It will have to move through all frames after the pausing point (inactive part), and only moves to the next quiz slide after reaching the last frame. Not exactly what you want. Two possible fixes:

As is the case for other quiz slides in the QSP projects, replace the action ‘Continue’ by ‘Go to Next Slide’. You don’t have to bother about the wrongly timed smart shapes in that case.

Move the pausing point on the quiz slide with the mouse (not possible in Timing properties) to place it near the end of the slide. In that case you have to extend the smart shape timelines as explained in Tip 1. This workflow is recommended over the first fix,  if you expect slow connections with the LMS.

Similar problems can occur on Drag&Drop slides but will not expand on that. Know however that the pausing point is not visible on D&D slides in the Timeline panel as is the case for quiz slides.

If you are want some more information about the tips explained above. Not surprising, they all link to understanding the Timeline (priority 1 for each Captivate user). Maybe this blog (one of a sequence about the Timeline) can help you:

For quiz slides, the Submit Process is explained in detail in this post:

If you want to add audio clips from another type than slide audio: