Update: an updated version (with a new workflow) and more details about Resetting a slide is published recently under this link

As promised in a previous article, I explored the enhancements to Drag&Drop in Captivate 9, more specifically added InBuilt States. In previous versions only buttons and shape buttons had those states. Captivate 9 added multistates to all objects and provided InBuilt states for all objects in a Drag&Drop slide: drag sources and drop targets. Custom states can be added as well. Both InBuilt states and custom states have some limitations similar to the Inbuilt states for buttons. Drag&Drop objects have also limitations for added custom states.

Watch this movie, I left the default play bar active to allow you free navigation. You'll find two Drag&Drop slides with different use cases on slides 4 and 5:
Download DDTest.swf

The Drag Sources have 5 InBuilt States (see slide 2 in movie). Common to all those states and to the custom states is that you cannot add any object in a state. All the options on the Big Button Bar (horizontal toolbar) are dimmed with the exception of the Record button (for audio): no Text objects, no Shapes, no Higlight boxes (under Objects), no Media can be added to any state. Here is a short description of each state, of its functionality and limitations. As a visual reminder have a look at the Gallery, which shows those states for the first use case

The Drop Targets have 6 InBuilt States (see slide 3 in movie). Three of those states have a name that is identical to an existing state for the drag sources: DragOver, DropAccept and DropReject. For Drop Targets you can add objects to all states, both InBuilt and custom states. Some states appear immediately, other states only appear after Submitting the exercise. Here is the overview, again with a visual reminder from the first use case in the example movie.

The default Reset button has been added to both use cases (slide 4-5). This button can only be used to reset before submitting the result. I added an extra button 'My Reset', which is really the Replay2 button described in a previous blog post. If a D&D slide is not included in a quiz, has not score it will be reset when you re-enter the slide. This is what I'm doing, getting back to the last frame of the previous slide, then continue. That may result in some flickering, depending on the bandwidth, but the D&D will be totally reset. The mentioned blog post explains the need for a user variable v_enter to store the first frame number of each slide with an On Enter action.

There is only one correct answer: DragSource1 to Target1. There is an object action for this correct answer, to change the state of the other drag source to the Custom state, as you can see here: 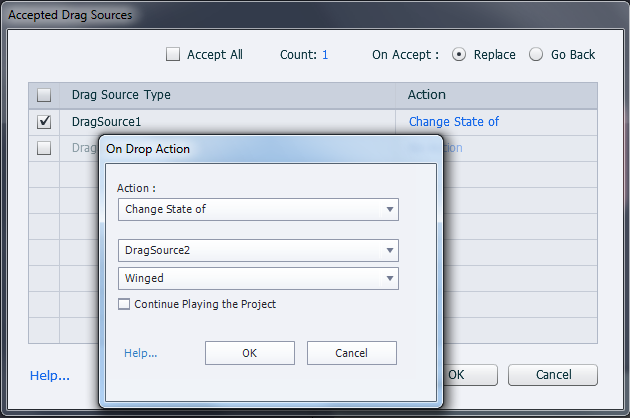 Setup is almost the default set up: Snap behavior will change the size and the opacity of the dropped object to 70% (size) and 80% (Opacity), and snaps to the center (Anchor). There is one attempt allowed, and the actions on Success and Failure are visible here: 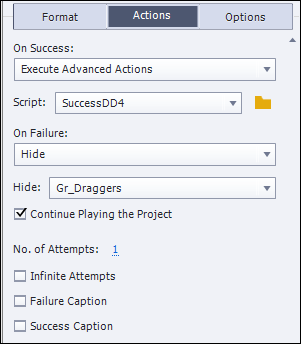 Due to hiding the drag sources with this Success event, the On Enter action of the slide has to 'reset' the situation by showing the group Gr_Draggers again. This was combined with the assignment of the user variable v_enter for this slide in the action: 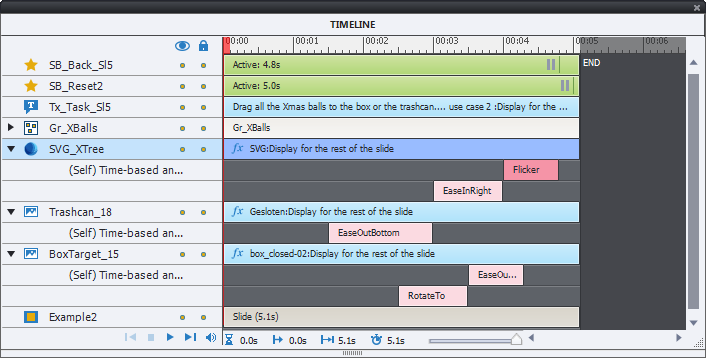 Effects are time-based, starting after the pausing point of the Drag&Drop (1.5secs which is default). Back and Next buttons have no pausing point in this slide. When the playhead is released by the Success event, it has to continue seamlessly to the end slide 6.
For the correct answer all Christmas balls have to be dropped either in the box (2, 0, 1 and 6) or in the trashcan (3, 4 and 5). There are no object actions in this use case.
For setup of both drop targets size and opacity of the drag sources will change to 0% to have them disappear in the target. You can see that the actions on Success and Failure are very simple: 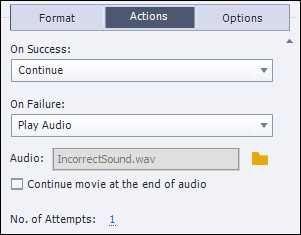 Even the on Enter action of this slide can be a real 'simple' action to have the correct frame number assigned to the user variable v_enter: 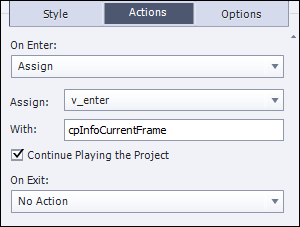 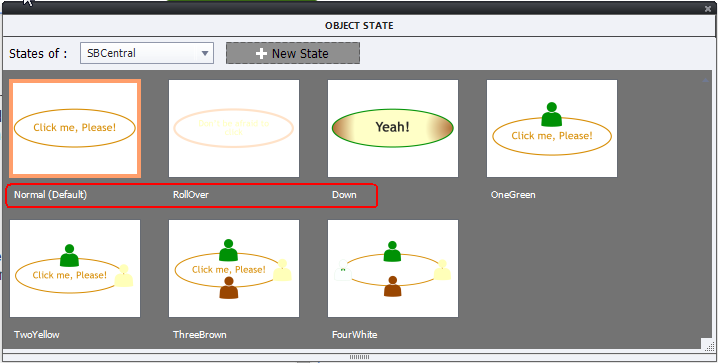 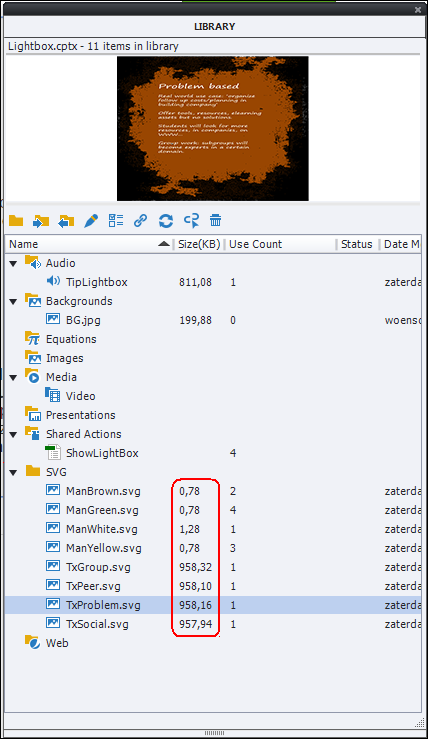 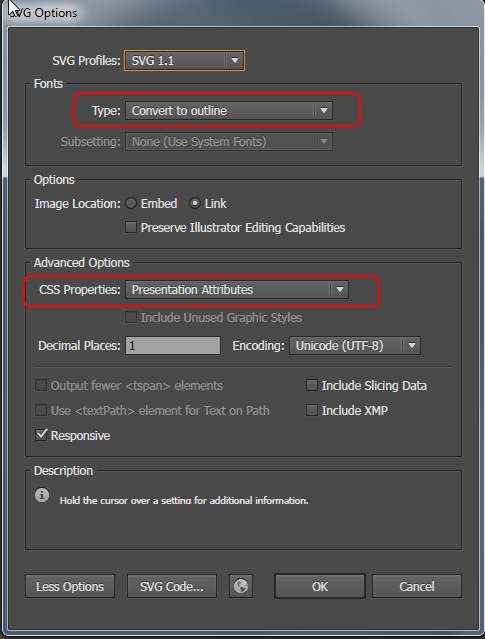 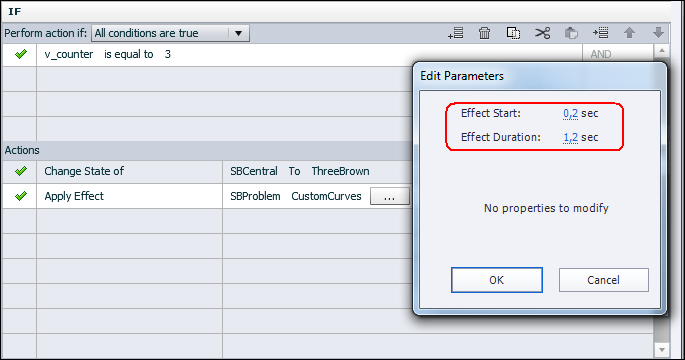